Starting today, the bakery will be serving its naturally fermented sourdough bagels every Tuesday at all of its locations, including in downtown Los Altos. The bagels were previously only available at pop-ups at Manresa Bread's all-day cafe in Campbell. 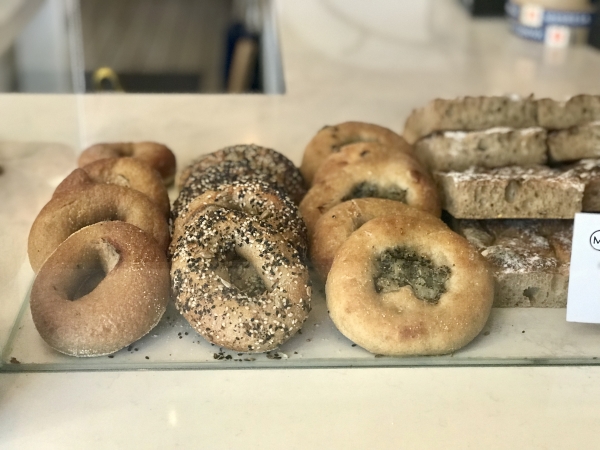 Naturally-fermented plain and everything bagels and an onion bialy (far right) at a pop-up at Manresa Bread in Campbell. Photo by Elena Kadvany.

Manresa Bread Los Altos at 271 State St. will have plain, sesame, everything and cinnamon raisin bagels from opening at 7 a.m. until the bakery sell outs. The bagels cost $4 each and $1 extra for cream cheese.

Head baker Avery Ruzicka wanted to create a uniquely West Coast bagel that "represents our focus on fresh-milled flour and sourdough fermentation," she said in a previous interview. The bagel dough, made from fresh-milled organic flours, is fermented for 12 to 16 hours then boiled in a malt-syrup solution and baked in a deck oven. 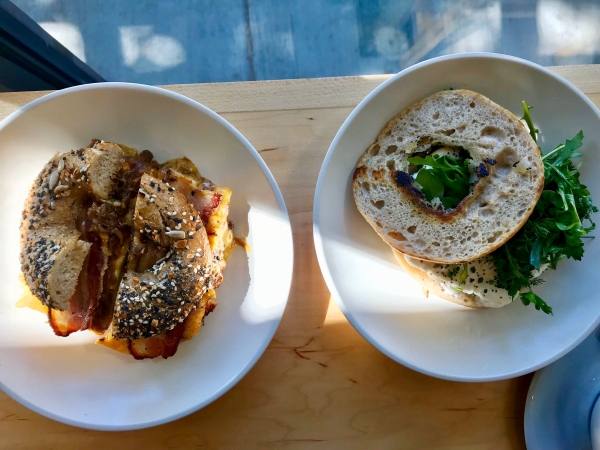 An everything bagel with bacon, egg and cheese (left) and onion bialy with cream cheese and herbs at Manresa Bread in Campbell. Photo by Elena Kadvany.

Campbell still has the most extensive bagel options of the three Manresa Bread locations, including a bacon-egg-cheese sandwich with onion-pepper jam (pictured above) and a Korean-ish bagel sandwich with slow-cooked turkey breast, cheddar, bacon, pickled daikon, carrots, green onion, gochujang-aioli and lettuce. There's also a vegan option with a jalapeño-cashew schmear.

I wonder if the bread physical stores will work. The brand is so strong, profit margins good,, and a tight focus. Los Altos is a little sleepy.... gonna go check this out on a Tuesday for sure. Can't beat draegers asiago cheese loaf for 5 bucks tho.... or
Mayfield's full café. And we do the the bagel cafes deals for a dozen. This is a coffee and a bagel treat deal...nice 1.