Uploaded: Jan 21, 2020
Porridge & Things, downtown Millbrae's newest restaurant, specializes in live seafood porridge from Chaozhou, a city in the eastern Guangdong province of China.
Also referred to as Chiu Chow, the coastal region of Chaozhou is known for its seafood, said Kevin Lu, a partner with Porridge & Things. Traditional Chiu Chow restaurants are few and far between in the Bay Area, which was part of the reason the owners wanted to bring Porridge & Things to Millbrae. (Lu said he's aware of one in San Francisco and another in Fremont.) The restaurant's chef hails from the Chiu Chow region and returned there for research before opening the 235 Broadway restaurant.
Vietnamese-Chiu Chow restaurants are more common in the Bay Area, he said, a reflection of mass migration from Chiu Chow to Vietnam during the Japanese invasion during World War II, as are fusion restaurants that serve some Chiu Chow dishes.
"There's really no competitor in this line of cuisine," Lu said. 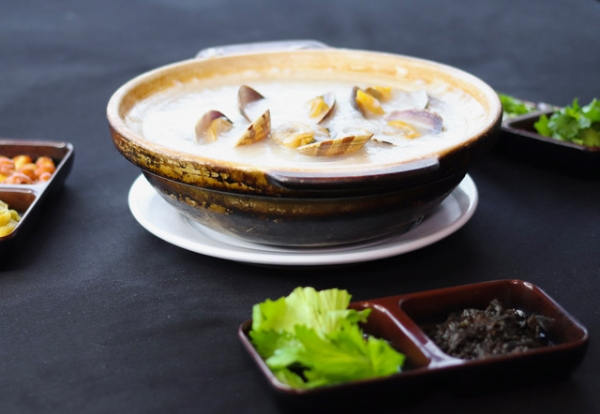 Clam porridge from Porridge & Things in Millbrae. Photo courtesy Porridge & Things.
Porridge & Things is the newest concept from the owners of Noodles & Things, a build-your-own noodle soup shop with locations in San Mateo and Millbrae (just two blocks away from Porridge & Things).
Customers can take their pick from a tank filled with live lobster, crab, shrimp, abalone, geoduck and other fish to be cooked and served with porridge. They then choose their preferred cooking method for the seafood: boiled directly in the porridge, stir fried with scallion and ginger, salt and peppered, steamed or blanched.
"The sweetness of the live seafood," Lu said, "will transcend into the porridge."
The porridge is cooked in a clay pot in a traditional method called "sawo," Lu said. It's cooked and served in the same pot until the rice softens and thickens.
"The difference with Cantonese porridge is that a perfect Cantonese porridge has to be a paste with tiny remnants of rice instead of half a grain, which gives the two distinct textures," Lu said. "In Chinese (cuisine), texture is as important as presentation, (smell) and taste."
For those who haven't tried Chiu Chow food before, he suggested starting with the abalone and chicken porridge, plus the must-order Chinese donuts. Porridge & Things' signature dish, the crab and prawn porridge, is "for the real, bold Chiu Chow palate," he said.
If seafood isn't your thing, there are other options, from the more standard?-?wagyu beef, sweet potato and Chinese donuts?-?to the more adventurous, including frog, pork stomach and preserved 1,000-year-old eggs. Porridge & Things also serves small dishes such as braised goose, scallops in XO sauce, spicy beef tenderloin, stuffed tofu and dumplings.
Or, go big with the chef's choice option: a $1,500, 10-person, 18-course "luxury feast" crafted by the chef that must be ordered a week in advance.
For drinks, Porridge & Things offers a kung fu tea pairing, a traditional Chinese tea ceremony "with very specific protocol," Lu said.
"The tea opens up the palate for the flavor range of Chiu Chow cooking, one of which is 'fo hau,' meaning the heat of the stove (with) which the chef cooks. Each tea variety has it own distinct taste and personality, not unlike wine," he explained.
The owners are working on opening a fourth restaurant in San Francisco?-?an "express" version of Noodles & Things that will be akin to a cafeteria.
Porridge & Things is open daily from 11 a.m. to 11 p.m.

Looking forward to trying it. Millbrae has several great Chinese restaurants. We tried the restaurant called “Wonderful “ the other night and it was so good. Lived up to it's name!!

Report Objectionable Content
Posted by resident, a resident of Downtown North,
on Jan 21, 2020 at 5:09 pm


Agreed. The Chinese food in Millbrae is tremendously better than in Palo Alto. Anyone know why that is?

Report Objectionable Content
Posted by Why?, a resident of Another Palo Alto neighborhood,
on Jan 21, 2020 at 5:21 pm


Resident- Palo Alto has no ethnic grocery stores ( think about that given the demographics of the city and area). So maybe the reason that there are better Chinese restaurants outside of Palo Alto May have something to do with that.


Resident - Palo Alto has good Chinese restaurants such as Tai Pan, Steam, Mandarin Roots. Their dishes are as good as those in Hong Kong and Shanghai.

Report Objectionable Content
Posted by Millbrae, a resident of Old Mountain View,
on Jan 22, 2020 at 12:55 pm


Don't know how much these numbers have changed since 2010-2015, but Millbrae's Chinese population is 32.1% of the total (the highest percentage of all Bay Area cities, and just outside the top 10 for California) compared to Palo Alto's 15.8%

Report Objectionable Content
Posted by Scotty, a resident of Green Acres,
on Jan 22, 2020 at 8:30 pm


Hard to find good porridge. Usually it's too hot or too cold.....

Report Objectionable Content
Posted by ChineseCuisine, a resident of North Bayshore,
on Jan 22, 2020 at 9:05 pm

Wonderful is OK but northern Chinese is not the most lauded cuisine in China. The best non-Cantonese places are Royal Feast ???? and the new Millbrae location of Easterly ??.

I can't name a best Cantonese place because there are just too many. The Kitchen is good.

Report Objectionable Content
Posted by Longing for Cantonese Bites, a resident of Evergreen Park,
on Jan 23, 2020 at 8:51 am

> I can't name a best Cantonese place because there are just too many. The Kitchen is good.

Oh, but please do list the best Cantonese places to eat! There are a plethora of Chinese restaurants that serve Northern Chinese food, but I'm hard-pressed to find any Cantonese places where I can get a good beef chow fun, congee, dim sum, or HK-style breakfast.

Cooking Papa in MV is a travesty since they changed hands. Taste is decent, but the portions and prices are Palo Alto high. Hong Kong Restaurant on El Camino comes the closest in taste and price, but we order from there on a regular basis and are looking for a change.

Any good suggestions for places along the Peninsula or - even better - the South Bay?

Report Objectionable Content
Posted by Longing for Cantonese Bites, a resident of Evergreen Park,
on Jan 23, 2020 at 8:54 am

Report Objectionable Content
Posted by Online Name, a resident of Embarcadero Oaks/Leland,
on Jan 28, 2020 at 10:40 am
Online Name is a registered user.


"Resident - Palo Alto has good Chinese restaurants such as Tai Pan, Steam, Mandarin Roots. Their dishes are as good as those in Hong Kong and Shanghai"

Mandarin Roots is such a disappointing attempt to be trendy fusion with sliders etc. I really miss the authentic old Hunan Gardens it replaced.

Report Objectionable Content
Posted by PChang, a resident of College Terrace,
on Feb 15, 2020 at 6:44 pm


Elena, your reference to chiu chow cuisine is also known as Teochew cuisine which is more specific to the Chaoshan coastal region in Guangdong, which is where the term Cantonese usually comes from. I love porridge so ill definitely check it out, you might also be interested in the Netflix series Flavorful Origins which has a lot of beautifully photgraphed 10 minute vignettes. on different specialties in the chaoshang region and how they are made. I dont think there are any great chinese restaurants in Palo Alto so Ive stopped going out to eat although Taste isnt bad. Da Sichuan has a few dishes we like as well. I also hear good things about Noodle Talk, in the San Antonio shopping center where Teaspoon is, from my southern Chinese friends. And if you know what to order, Chef Chu can be surprisingly good but you might have to know Larry Chu and order What he recommends-often not on the menu. Keep looking for those new out of the way places!

How Much Time do You Spend Outdoors?
By Chandrama Anderson | 0 comments | 2,276 views