Uploaded: Apr 13, 2020
Rakuten is an international e-commerce company that gives cash back and shopping deals to 13 million users in the United States.

Starting today, though, the company is turning its focus local. Rakuten, which is based in Japan but has its American headquarters in San Mateo, is launching a new service designed to help restaurants set up online ordering and pickup during the coronavirus. The majority of the pilot restaurants using the service are located on the Peninsula.

"Many local community restaurants are struggling to stay afloat right now, especially those that rely on word of mouth and don't have the margins to work with delivery services like DoorDash or Postmates. This new platform will help independent restaurants in particular not have to sacrifice profits in order to stay open to serve their community," Rakuten said in an announcement. 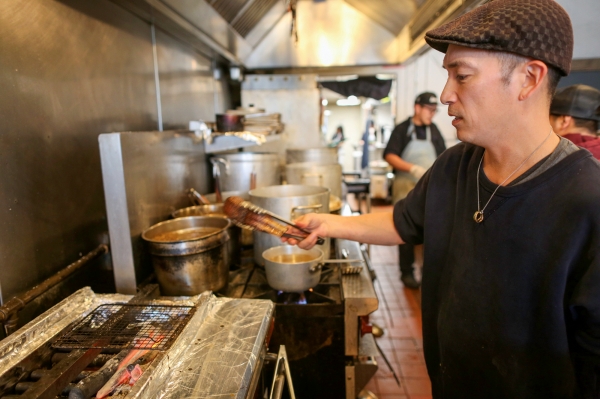 Takeo Moriyama, co-owner and chef at Kemuri in Redwood City, one of the Peninsula restaurants piloting Rakuten Takeout. Photo by Sammy Dallal.

The online platform, Rakuten Takeout, will be free to restaurants until November. Customers will get 20% cash back on orders for a limited time, which Rakuten will fund rather than passing that cost to restaurant owners.

"Our goal is to help (people) abide by the shelter in place (order) but also help support local businesses who are obviously feeling the worst of it at this time," Amit Patel, CEO at Rakuten Americas, said in an interview.

The company initially sought out smaller restaurants with little to no online presence but is including any restaurant that wants to sign up. Rakuten staff who live in and around San Mateo cold-called their local restaurants to let them know about the service and to help them set it up, Patel said.

Jeff Kim, who owns Totoro Ramen in San Mateo, said in a press release that Rakuten helped him set up the online ordering "quickly and easily – and the fact that it is free is so helpful in these hard times."

"COVID-19 really changed our business overnight, and it's getting harder to rely on word of mouth to drive orders and visits," Kim said.

The restaurants piloting Rakuten's platform include:

Rakuten hopes to expand the platform to restaurants throughout the Peninsula, Bay Area and eventually, nationally.

Restaurant owners who are interested in Rakuten's service can find more information here.

Posted by Random Internet Guy, a resident of Another Mountain View Neighborhood,
on Apr 13, 2020 at 7:56 pm

Rakuten is not well known here in the USA but this is not some sort of upstart dilettante B.S. startup.

They are basically the Amazon.com of Japan. There is serious money behind this.

Report Objectionable Content
Posted by chris, a resident of University South,
on Apr 13, 2020 at 8:46 pm


Dan Gordon announced to Palo Alto City Council tonight that he has shut his PA restaurant for good.