Thus opened the Facebook post announcing that Pioneer Seafoods, a popular San Francisco-based fishing boat, will now be selling fresh, local seafood out of the Port of Redwood City. 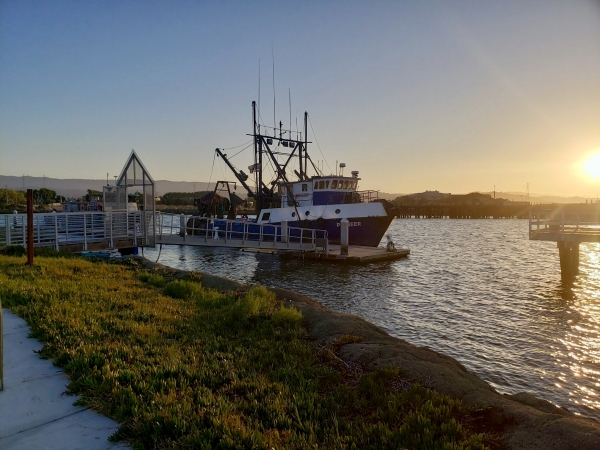 The Pioneer Seafoods boat docked in the Redwood City harbor, its new home. Photo via Facebook.

Owner Giuseppe Pennisi made the move to Redwood City after losing his boat's spot at Fisherman's Wharf in San Francisco, where his fresh fish, sold directly off the boat, drew a loyal following.

Pennisi said he was left scrambling to find a new home for his commercial fishing boat and striking out at port after port while not earning any income. He was elated to find the opening at the Redwood City harbor, where he said management was incredibly welcoming and eager to make a partnership work. It's also the only deep-water port in the South San Francisco Bay, meaning it can accommodate Pennisi's 76-foot boat.

Pennisi also took out a $200,000 loan to purchase a food truck, which he's calling a "rolling fish market and restaurant," to serve fish and chips, clam chowder and other cooked fare to-go at the dock. People can expect to see a variety of fresh, local seafood, from rock fish and black cod to petrale sole, halibut and crabs when they're in season. He joked the food truck should get a Michelin star distinction for the quality of the seafood, which will go straight from the boat into the truck to be served to customers.

He said he tries to keep prices affordable and family friendly: "I don't want my fish prices so high that they can't buy a bag of fish for their whole family."

Pioneer Seafoods docked this past weekend at 459 Seaport Court in Redwood City and sold fresh halibut and sea bass off the boat. A Facebook post promised over 40 varieties of fish coming soon. Pennisi regularly engages with customers on Facebook, posting lengthy updates and photos from fishing expeditions as well as seafood recipes. Today, he said on Facebook that the food truck will be open from noon to 6 p.m. this week slinging fresh halibut fillets, fish and chips and fish tacos.

Pennisi is a third-generation fisherman. His grandfather moved to California from Italy and started fishing in the Monterey Bay to support his family, according to the Pioneer Seafoods website. Today, Pennisi's operation is one of the last federal fish trawlers in California, he said.

Pennisi's ultimate goal is to educate people about the importance of buying local, sustainably caught seafood.

"People are starting to have access to fish in their own backyard," he said.

mary ann is a registered user.


I look forward to buying his fresh fish and food from the food truck!