Uploaded: Jan 20, 2021
Gurinder Singh, a native of north India who's worked in restaurants since he was a young adult, has opened a new Indian eatery in Mountain View called In d Go.

The restaurant at 2105 Old Middlefield Way, Suite C is modeled after dhabas, or small roadside eateries in India that don't have refrigeration so only serve a few dishes until they sell out for the day, Singh said.

"That's what I wanted to do: to make fresh food every day (with) a very limited menu," he said. 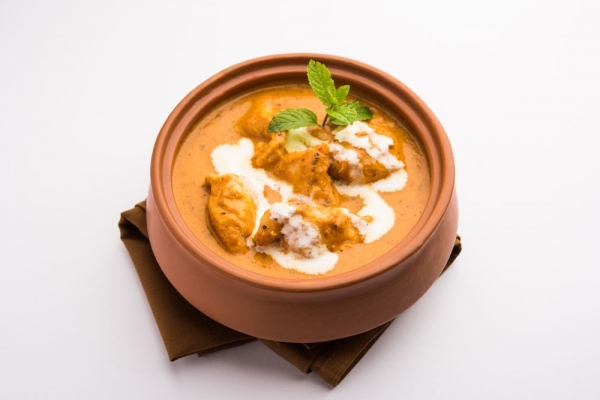 In d Go serves a few entrees, including the above butter chicken, goat curry and chana masala, plus rice, roti and dessert.

Singh said he grew up uninterested in studying the pursuits Indian society expected of him, such as becoming a doctor or engineer, so his parents sent him to Switzerland to study hotel management. He stayed in Switzerland for two years until a fateful call from his uncle, who asked if he wanted to come back to India to take a job in a restaurant.

Singh came to the United States in 1998 and worked as a server before opening a slew of his own restaurants over the next 15 years in Pennsylvania, California (including a stint in Mountain View) and Australia. In 2009, he moved back to India to learn more about Indian cooking and opened a restaurant there as well.

Several years later, he returned to California and started two new Indian restaurants, including a 9,000-square-foot banquet hall in Modesto that was fully booked with events for 2020. After the pandemic shutdown took effect last spring, Singh eventually saw the writing on the wall and shut it down.

"Covid has disrupted many people's lives and no one knows better than us how our life went from fully booked events to fully closed," Singh said. 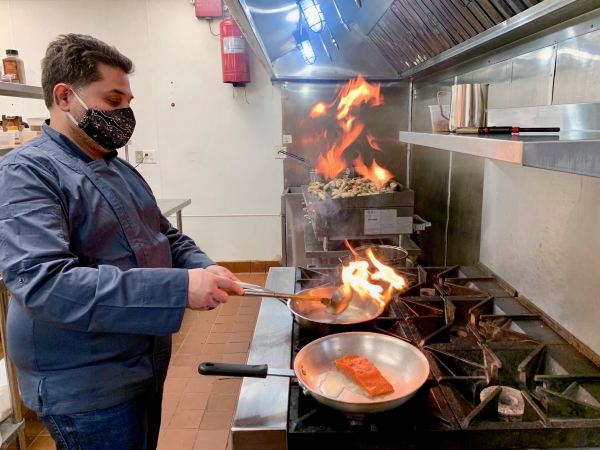 Gurinder Singh cooking in the kitchen at the newly opened In d Go in Mountain View. Photo courtesy Gurinder Singh.

At In d Go, he's keeping things simple and small for now. But he hopes to roll out a meal delivery program for local tech companies when their offices reopen and has a large production kitchen that can churn out a high volume of food.

The menu includes some vegan options, including a vegan paneer tikka masala with garlic fried tofu instead of paneer cheese, and lassi made from homemade cashew and almond milk, coconut cream and mango pulp. The kitchen cooks with cashew to reduce the amount of cream in savory dishes, Singh said.

You can also order sides of the restaurant's homemade ghee, mango chutney, hot sauce and raita.

With the challenges of opening a new restaurant during the coronavirus, Singh is offering a 20% discount on all orders through the end of January.

Me is a registered user.


*sigh* just another restaurant that uses factory farmed meat instead of free range/grass-fed. Would love to try it, but I won't be because I'm not a fan of eating animals that spent their entire life barely able to even move.

Report Objectionable Content
Posted by Observer, a resident of Greater Miranda,
on Jan 21, 2021 at 6:18 pm
Observer is a registered user.


"Me" might consider ordering the vegetarian or vegan items and skip the meat altogether.

Report Objectionable Content
Posted by ChrisC, a resident of College Terrace,
on Jan 21, 2021 at 7:30 pm
ChrisC is a registered user.


"ME" How do you know his source of meat? If its California chicken, their lives are not so bad. Beef and pork (the worst) will not be on menu.

Report Objectionable Content
Posted by Me, a resident of North Whisman,
on Jan 22, 2021 at 11:30 am
Me is a registered user.


Observer: You're missing a key point: I don't want to financially support a business that (directly or indirectly) causes animals to needlessly suffer.

Chris C.: Because it wasn't mentioned at all.

Factory farmed meat is the default today, whereas "grass-fed" and "free range" are legally significant special terms. When businesses go through the trouble of lining up free-range (chicken) or grass-fed (beef) suppliers, they make sure prospective customers know by using those terms; they don't hide it.

Everyone: We have really great local businesses that *do* go through the trouble of using more ethical supply chains, and they're not just expensive steak houses! Check out (for instance) Big Bites Pho in Mountain View (grass-fed), or Starbird Chicken in Sunnyvale (free range).

Both offer really great (non-vegetarian) food ... with a legal mandate that the animal behind it was able to at least move around during it's life. If we all pressure restaurant owners to adopt ethical suppliers, we can reduce animal suffering ... without all becoming vegetarians.

Report Objectionable Content
Posted by Victor Bishop, a resident of Another Mountain View Neighborhood,
on Jan 24, 2021 at 7:17 pm
Victor Bishop is a registered user.


I got takeout last night- goat curry and vegetable korma. Both very good, reasonable prices and 20% off this month!!!

Report Objectionable Content
Posted by Alvin, a resident of Professorville,
on Jan 25, 2021 at 9:33 am
Alvin is a registered user.


No offense Elena, but I feel like I'm reading PRAVDA news as you highlight the one or two new restaurants while ignoring the thousands of others that are either closing permanently or are on the brink of bankruptcy from the Covid lockdowns. I see empty stores with "for lease" signs popping up everywhere. Surely that is a bigger story than the handful of new shops that never imagined "15 days to flatten curve" would turn into a 10 month nightmare with no end in sight.

This barbecue business was kicked out of Belmont. Now it's a Sunday fixture in Redwood City.
By The Peninsula Foodist | 2 comments | 4,366 views