Stanford educators teach the ancient art of playing with your food

Last weekend families were encouraged to not only play with their food, but shape it into art. Dozens tuned in via Facebook livestream to create their own portraits with the Second Sundays program from the Cantor Arts Center and Anderson Collection at Stanford University. The medium of choice? Food. 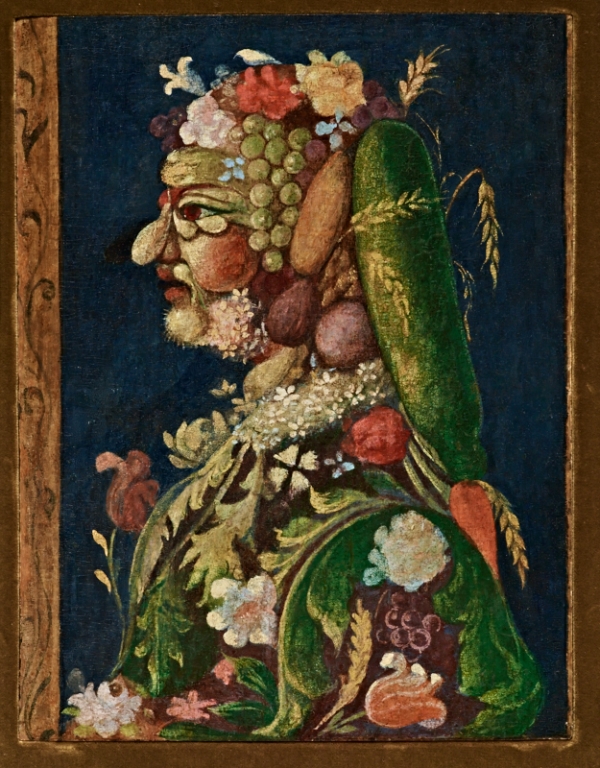 This stems from a long tradition, educational programs associate Diane Handy Holaday said. From the Stone Age to now, people have long used food not only for sustenance, but also to communicate something beyond what meets the eye through art.

"You can be an artist and you don't have to have a paint set or drawing tools," Holaday said. Nor do you need whole foods. "You can always use scraps. Leaves, cut up stems. Those make great materials."

The materials are practical, and also personal. By using what's on hand, "the portrait will be reflective of what's part of your family," Holaday said.

That was the case for public programs coordinator and art history major Aubrey Beam. She said the Fabulous Food Faces project made her feel closer to her parents.

"It's a big rule in my family not to play with your food, so this project felt a little weird," Beam said during the event.

So she and her parents agreed to team up: Beam and her dad would use the ingredients to make portraits of each other, and her mother would use them to make a meal. 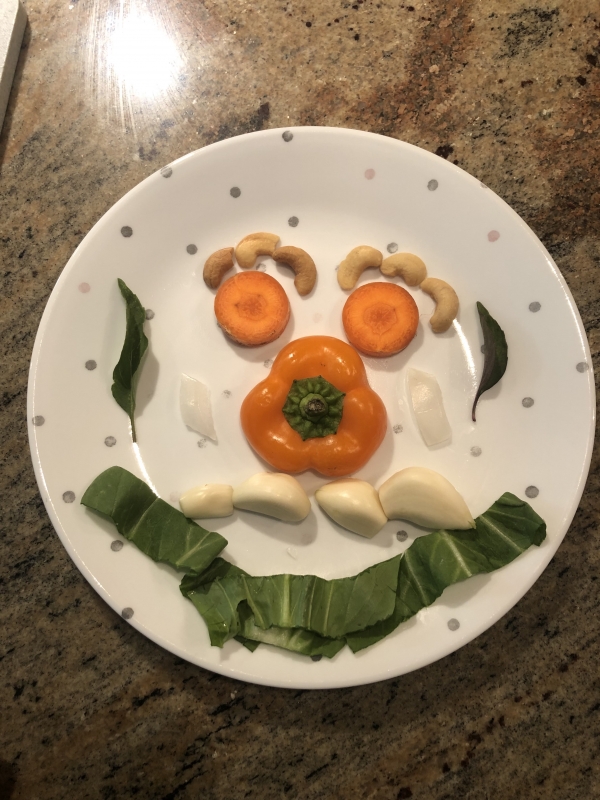 Aubrey Beam teamed up with her parents for the Fabulous Food Faces event from the Second Sundays program. She and her dad made portraits out of ingredients in their kitchen, and her mom cooked the food for dinner. Courtesy of Aubrey Beam.

Beam captured her dad's eyebrows with cashews and his mustache with garlic cloves. He captured her hair with greens and glasses with bell peppers. Then her mom cooked them up in a big pot, along with bok choy and basil, carrots, onions and vermicelli rice noodles.
Beam said the subsequent dinner her mom made "was absolutely delicious."

"…To me, food is one of the many ways that she shows her love for us," Beam said. "Food is also one of the few ways I get to learn about my mom. She immigrated here from Guyana (in) South America when she was just 11 years old. She tried hard to assimilate because she was still figuring herself out and she didn't want to get picked on."

That meant speaking with an American accent, and avoiding the British spelling system and certain words, for example. As a result, Beam and her sisters didn't learn too much about Guyana's history and culture.

"But she was always open when it came to food. We always ate all of her favorites," Beam said. Among them were West Indian curry, chow mein, Mettagee, bakes and saltfish, pine tarts and butter flaps. "Because she shared them with us, they became our favorites too."

Beam said that she usually focuses on what ingredients taste like and what their cooking time is, but the portrait process changed that.

"Slowing down to use them as art materials made me see them in a new way," Beam said. "I realized that food isn't just beautiful because it tastes good. It's really just beautiful."

Beam and the other program participants' use of food in portraits follows the likes of Renaissance painter Giuseppe Arcimboldo (1527–1593), and the Bay Area-born artist Martine Gutierrez who continues to make art today. Holaday included their works as examples during the Fabulous Food Faces event.

"It's really a question of what defines a portrait," Holaday said. "Is it for royalty? Is it for everyday people? It brings up lots of things we want people to wonder about. Instead of someone going by and saying, 'Oh, there's a portrait of a man' — this guy's made of flowers. Why's he made of flowers?"

Centuries apart, these artists both used food in their iconography, but to be consumed in very different ways.

Arcimboldo gained fame for his "composite head" works in which fish, produce, meat and other objects became the forms in his portraits, amusing members of the court. 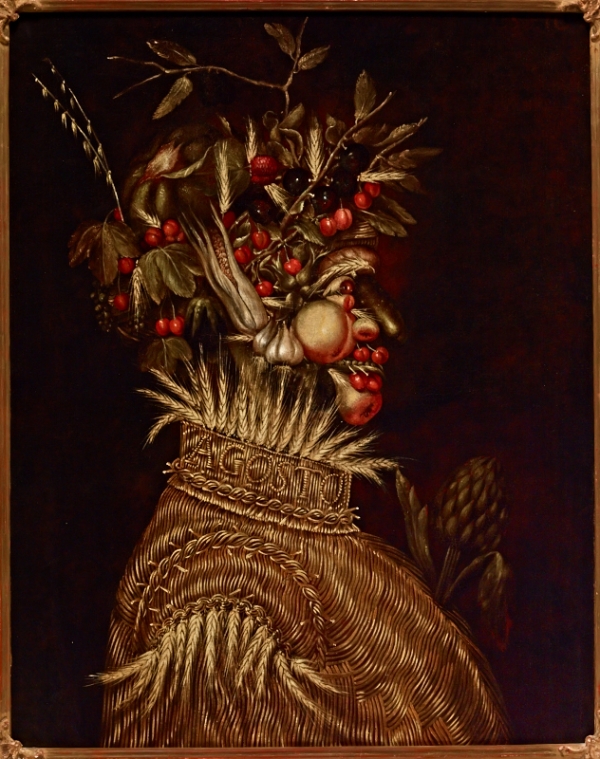 His "Summer" painting personifies a season and someone in their prime. The subject's rosy cheek is composed of a peach, its lips of cherries and its ruffled collar of wisps of golden wheat. "Agosto," it says below: "August." In this image, the viewer gets a sense of what's locally available and in season. It's also a nod to wealth with a visual pun: The subject's ear is an ear of corn — an import from the New World that wasn't grown in Europe until 1525, just two years before the artist's birth.

"This corn was brought over and grown in fields for royalty. It was a sense of showing how important you were," Holaday said.

Both glossy fashion magazine and critique, Gutierrez's 120-page "Indigenous Woman" uses sumptuous fruits in her "Masking" series. In "Masking, Green-Grape Mask," kiwis stand in for eyes and a dragon fruit for a mouth, the neck decorated in coils of green grapes. 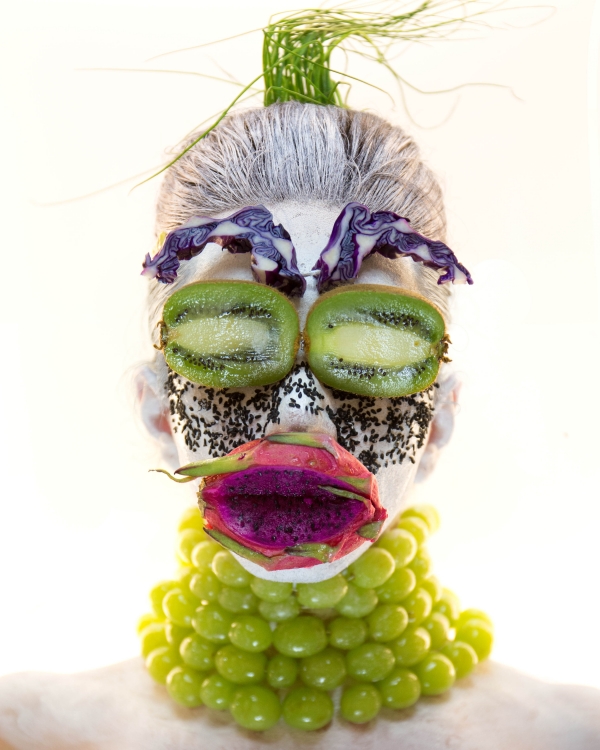 "This is a quest for identity," her artist statement said. "Of my own specifically, yes, but by digging my pretty, painted nails deeply into the dirt of my own image I am also probing the depths for some understanding of identity as a social construction."

In the works of both Arcimboldo and Gutierrez, food invites the viewer to peel away the different layers behind the portraits, probing into what's celebrated, hidden and revealed, commodified and consumed, by whom and for whom.

In the Second Sundays program, Holaday posed this question to participants: "What is important to you? What foods will you choose to make your portrait?"

Learn about Second Sundays at museum.stanford.edu/programs/family-programs.

Dehydrating for Backpacking and Camping
By Laura Stec | 2 comments | 1,610 views