During his birthday camping trip, Denzel Jackson woke up at 5 a.m. and spent the morning fishing with RiSean "Bookie" Tinsley. When they returned to shore and stepped off the boat, the craft beer connoisseurs brewed up an idea. 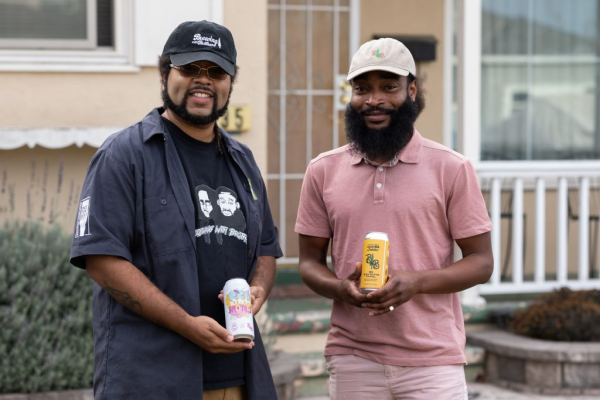 RiSean "Bookie" Tinsley, left, and Denzel Jackson, right, hold cans of their Sea Brothas and Black Belgian Tripel beers in East Palo Alto. The friends founded Brewing With Brothas in 2019, with a focus on craft beer. Photo by Magali Gauthier.

"We were having a beer, and talking about actually making our own," Jackson says. About a month later, the two purchased a homebrew kit at MoreBeer in Los Altos. They started with extract brewing, then went on to all-grain brewing. Jackson recalls, "It kicked off from there."

With that, the friends co-founded Brewing With Brothas. Their goal is to launch the first microbrewery in their East Palo Alto hometown, where they were born and raised.

"We want a place for our community to come and chill, have a good time and have a quality pint to drink," Tinsley says.

Since their founding almost two years ago, Brewing With Brothas has received local and national recognition.

Out of 18 brews, theirs took first prize at the Taplands homebrew competition out of Santa Clara in December 2020. It was canned and showcased at the taproom. Then, "It just never stopped." 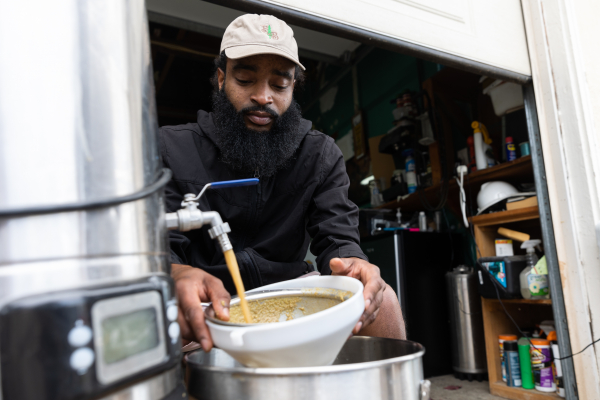 Denzel Jackson of Brewing With Brothas strains hops out of beer. Photo by Magali Gauthier.

This year, Brewing With Brothas was among the 80 Black-owned breweries on the books in the U.S. and Central America sought out by brewer Rodg Little of Oak Park Brewery in Sacramento to participate in this year's Brew Your Story project.

Since they started developing it, BB3 has become Brewing With Brothas' first flagship beer. With that one, "there's just something that clicked," Tinsley says. 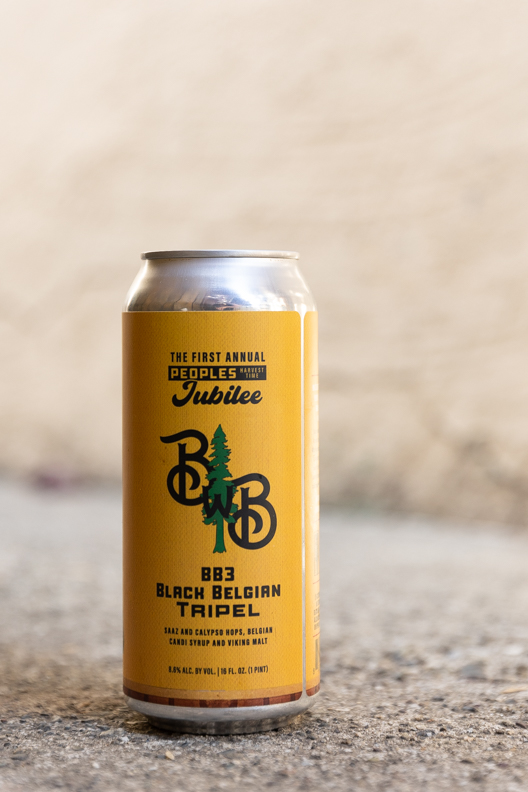 "There's so much more to dark beers." Brewing With Brothas' Black Belgian Tripel has notes of chocolate, toffee and clove. Photo by Magali Gauthier.

The Belgian-style beer is "phenomenal," says Little, who's been part of Sacramento's craft brewing scene since it began. "I think they probably created a new style."

To make BB3, Brewing With Brothas started with a yeast-driven Belgian base with clove and banana esters. They added dark malts, imparting caramel and roasty characteristics. At 8.6% ABV, BB3 has notes of chocolate, toffee and clove. The flavor is smooth and rich, light and savory, and it's got a dry finish.

"When you say 'dark beer,' a lot of people think of Guinness," Tinsley says. He enjoys the dry stout, he says, but, "There's so much more to dark beers. That's something we want to highlight. One of our mottos is, 'Make dark beer great again.'"

Developing BB3 and all their other brews is a result of love and countless hours brewing. Every weekend, Jackson and Tinsley can be found perfecting their recipes, experimenting with something new and different just about every month.

They've made mouthwatering Peach Cobbler Cream Ale ("just like Mom used to make"), Banana Milkshake IPA made with Mosaic, Sabro and Simcoe hops ("think about banana milkshake but not as thick") and a Blackberry Cheesecake Cream Ale.

They've created a Zel-Hefe series, sharing their version of Hefeweizen. They've paid tribute to other brews, with their Brotha Pliny giving a nod to Russian River's Pliny the Elder. They've also taken inspiration from Gordon Biersch — the brewery where Tinsley first tasted beer that he actually liked.

Tinsley was pursuing his master's degree in social work in Hawaii when he encountered it. "The dormitory was right below a Gordon Biersch brewery. That's where my love of craft beer started," Tinsley says. He chuckles. "Before then … I had no idea about how beer could actually taste good."

Meanwhile, Jackson's dad introduced him to beer. "When I had my first beer, I didn't really like beer." Jackson wanted to change perceptions around it. "The conversation about beer is maybe not as high esteemed as folks talking about wine. It's just a conversation that maybe hasn't been had. There's complexities if you look for them." 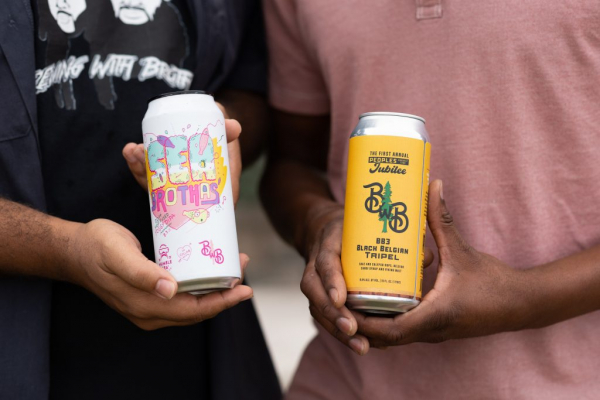 "We were having a beer, and talking about actually making our own." RiSean "Bookie" Tinsley and Denzel Jackson started homebrewing in the fall of 2019 and have since gone on to participate in competitions and collaborations. Photo by Magali Gauthier.


Jackson and Tinsley set out to find those nuances. When Tinsley finished his studies and returned home to California, he reached out to Jackson, who had a penchant for quality food and drink.

"I asked him, 'Where's the best place to get a good beer around here?'" Tinsley says. "He started to name off some restaurants, and I was like, 'Those are cool and all, but where are the craft breweries at, the places where people make their own beer?'"

They ventured out to different breweries, like Barebottle Brewing Company in Santa Clara and Freewheel Brewing Company in Redwood City. "But I quickly realized there were no breweries around my area — East Palo Alto, Palo Alto," Tinsley says. There was the Tap Room on University Avenue, but that closed. 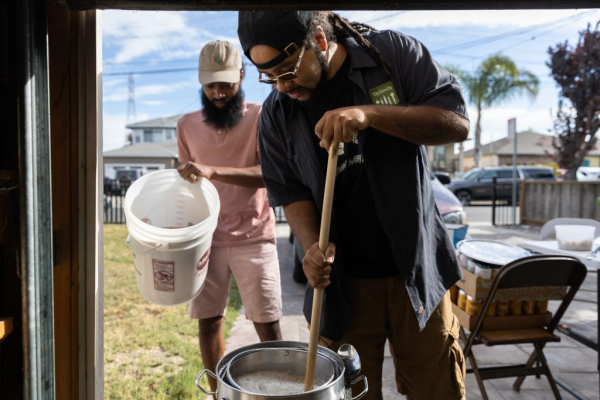 RiSean "Bookie" Tinsley and Denzel Jackson have a goal of opening a microbrewery and taproom in East Palo Alto. "This is my hometown," Jackson says. "Understanding craft beer and sharing craft beer with our community, it's a new frontier for us." Photo by Magali Gauthier.

Around that time, Tinsley had seen a social media post about Celeste Beatty, who's breaking barriers as the founder, owner and brewer of Harlem Brewing Company at a time when less than 1% of breweries are Black-owned.

Starting a business was something that Tinsley had long had in mind. "I come from a lineage of entrepreneurs. My grandfather and his brother started a car dealership some years back called Tinsley Buick. Just from then on, my grandfather and my family have always strived to make sure we have some kind of equity just to keep the family afloat, and keep the next generation going, and have something to stand on."

Creating a craft beer taproom where they grew up presents a special opportunity.

"We want to bring that here," Jackson says. "This is my hometown. Doing something here for my home, with all the changes that are being made, it would be nice to make a positive change for our folks … Understanding craft beer and sharing craft beer with our community, it's a new frontier for us."

Along the way, they've found a supportive community. Oakland's Hella Coastal is one of the teams that Brewing With Brothas has been learning with.

"They'd been through a lot of things that we were going to encounter. They started showing us the ways for how they went through things," Jackson says. "It's been a crazy learning curve. The people we've met have helped us substantially … They've been so inviting. They've been open books in terms of what they've been through, how they got through it, what ideas and ways to move forward … It's just a really collaborative industry. You'd be surprised the people you meet. It's a good place to be." 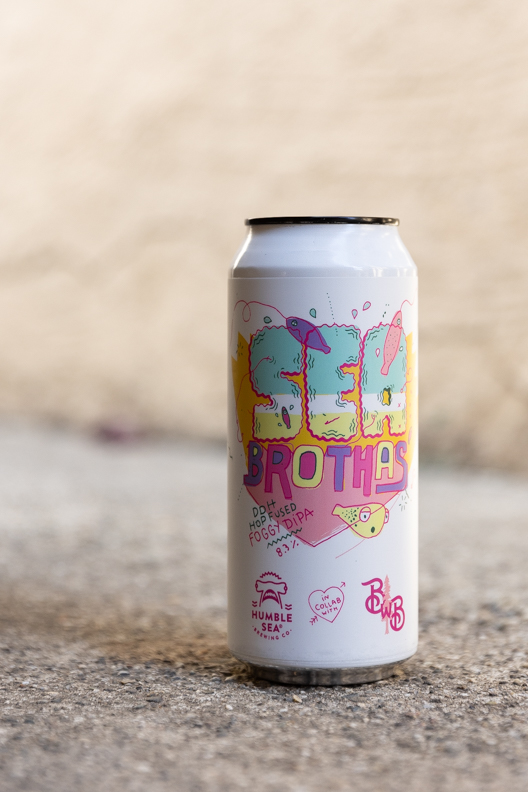 Sea Brothas is a double dry-hopped foggy IPA, made in collaboration between Brewing With Brothas and Humble Sea Brewing Company. Photo by Magali Gauthier.

"In our opinion, they're one of our top three breweries in California — the nation really," Tinsley says. "It was definitely a dream."

On Oct. 2, Brewing With Brothas and Humble Sea released Sea Brothas, a double dry-hopped foggy IPA. It's their take on a hazy IPA, the "foggy" inspiration suitable for the coastal area where it was born. 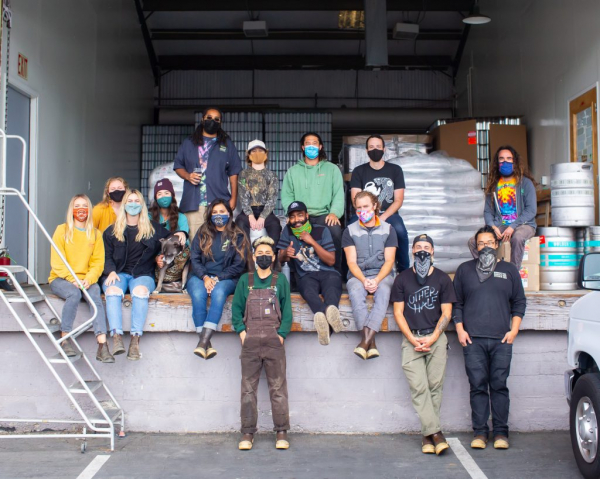 "It's just a really collaborative industry. You'd be surprised the people you meet. It's a good place to be." In October of 2021, Brewing With Brothas and Humble Sea Brewing Co. released Sea Brothas, a double dry-hopped foggy IPA. Photo courtesy of Amber Gaeta.

Sea Brothas reflects both breweries in name, art and style. It was brewed with a touch of honey malt, hopped with Citra and Motueka and a bit of Sabroe sprinkled in at the end. The result is a beer with a creamy mouth feel, full body and a rounded finish with notes of strawberry, piña colada and pineapple.

"The beer in particular turned out awesome," says Lee DeGraw, Humble Sea's head of marketing. "We feel really lucky to know those guys and work with them and share knowledge." 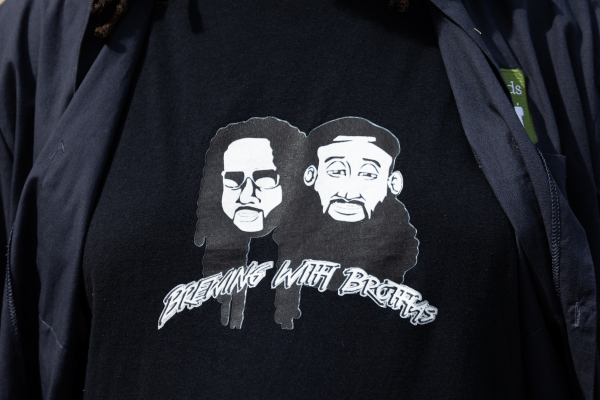 RiSean "Bookie" Tinsley wears a Brewing With Brothas shirt. He and Denzel Jackson are the craft beer company's founders. Photo by Magali Gauthier.

As their beers take flight across Northern California, their vision remains the same: creating a space to connect over quality pints in East Palo Alto. They envision a taproom where people can relax and do yoga, and that showcases local artists' work in music and spoken word.

"We love the craft beer atmosphere as it is. Whenever you go to a brewery, it's completely different from a bar or a club or anything like that. It's so much more relaxed, so much more open, so much more intimate," Tinsley says. "It's a place where people can actually converse with each other."

Once they find a brick-and-mortar location in East Palo Alto, they want to capture some of the magic of their family homes that they experienced growing up.

"Both of our homes over the years have been like home base for everybody in the neighborhood" Tinsley says. "That's what we want to do with our brewery. We want to have a place where good people can come and meet, break down barriers and have a good time to chill and hang out."

DianaDiamond is a registered user.


Î did not see he EPA address


Diana, as explained at the end of the article: "Once they find a brick-and-mortar location in East Palo Alto, they want to capture some of the magic of their family homes that they experienced growing up."