"With what has transpired over the course of the pandemic, it was really an opportunity to say thank you to those who have gone above and beyond in their civic duties and volunteerism," Manalo said in an interview.

The Bread Basket Bakery has served Daly City since 1977. During the pandemic, the team contributed to a community food drive.

"They stepped up and provided bread for those in need," Manalo said. "They provided extra bags of bread for families and individuals that were in need at that time." 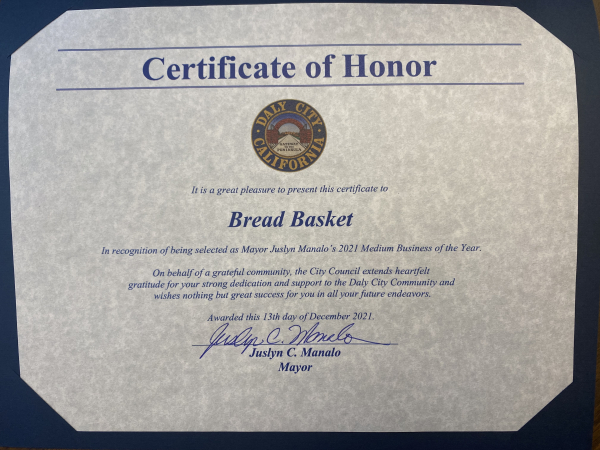 "It's nice to hear we have made a difference, and people see we're trying to help, and we've given back to the community," The Bread Basket Bakery manager Liza Cavan says. Photo courtesy of Juslyn Manalo.

"This whole few years, we've just been sticking to what we've been doing and surviving every day, and feeling good that we still have the support around knowing that we have the capability to make and share what we have with others," said manager Liza Cavan, who grew up watching her parents in action at the bakery alongside her sisters.

Now with her husband on board with the bakery team, Cavan said, "We're trying to keep up the big thing my parents started and put so much heart into. They broke through a lot of barriers in getting Filipino foods to bakeries all across the Bay Area and making a big foundation here, and that's what we want to keep going.

"It's nice to hear we have made a difference, and people see we're trying to help, and we've given back to the community. It's been nice (for the award) to come out of the blue for us and share with all of our folks." 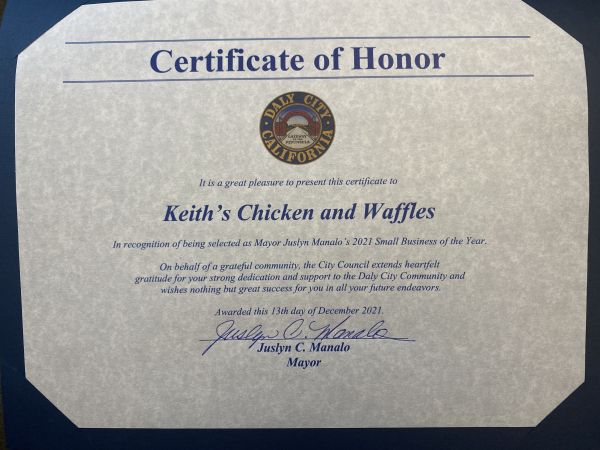 "I think it's their hospitality and their welcoming atmosphere," former Daly City mayor Juslyn Manalo says. On Monday, Deven Richardson, responsible for Keith's Chicken-N-Waffles front-of-house operations, accepted the 2021 Small Business of the Year award on behalf of the restaurant founded by his brother Keith Richardson. Photo courtesy of Juslyn Manalo.

"We know that's the standard time frame when you see businesses overcome the five-year mark, and (that) they'll be here for the long haul," Manalo said.

Manalo enjoys the food at Keith's Chicken-N-Waffles — she says that she started to crave the restaurant's fried chicken and collard greens when she was pregnant with her second child — and says the hospitality is what makes the business special.

"I think it's their hospitality and their welcoming atmosphere. You just feel this good energy when you go in there," Manalo said.

Everybody's connected, he said. "You're helping the business, the employees and the customers … The best thing I can say to other businesses is to nurture healthy relationships with everyone as much as possible. In the end we all need each other and we should all help each other."

At the end of a mayor's tenure, the outgoing mayor has an opportunity to recognize citizens and organizations that have made an impact on the community and that are central to the city. Awarding these three organizations was one of Manalo's last duties as mayor.

"That was my last meeting in paying homage (as mayor) to those that truly deserve it," Manalo said. "Sometimes we're under the radar, but there's definitely a lot of things in our community, and a diversity that exhibits the different food and culinary traditions."

Sutter and PAMF — protect your patients from coronavirus — not just your employees
By Diana Diamond | 42 comments | 3,758 views

'This is just the beginning': Boichik Bagels opening Peninsula outpost
By The Peninsula Foodist | 3 comments | 2,778 views