'This is just the beginning': Boichik Bagels opening Peninsula outpost 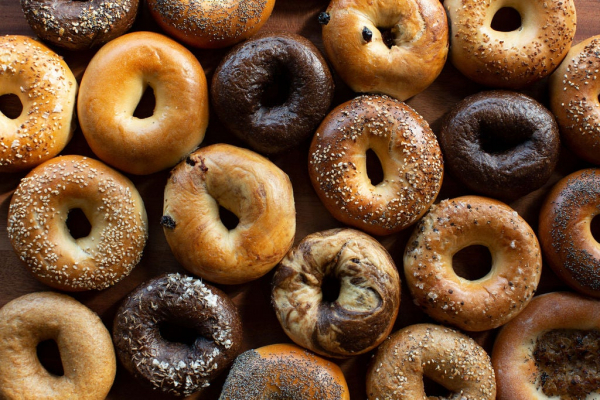 Boichik Bagels, a popular Berkeley eatery recognized by the New York Times as being part of a "West Coast bagel boom," is opening in Palo Alto this summer. Photo courtesy Boichik Bagels.

After a glowing writeup in the New York Times and the announcement of plans for a bagel factory and second retail location in 2021, Boichik Bagels owner Emily Winston is starting 2022 off with more big news: She's opening a new shop in Palo Alto's Town & Country Village this summer.

Housed in between CVS and Wildseed, the planned second location for the vegan San Francisco eatery, Boichik joins Manresa Bread as another new addition to the shopping center this year.

"My operations guy is awesome and chomping at the bit to have more operations to run," Winston says. "It's definitely going to be a challenge and we're going to learn a lot of stuff, but it's theoretically very doable so we're going to do it."

The Palo Alto location will have the same chocolate malted iced coffee, bagel and sandwich offerings as the original Berkeley eatery, with tables and chairs outside for dining. The dough will be made at the Berkeley store and delivered to the Peninsula, where the bagels will be boiled and baked as customers wait.

Once the West Berkeley bagel plant is up and running this fall, all of Boichik's dough will be made there, supplying Winston's stores as well as supermarkets, Winston says.

"This is just the beginning," she says. "We've got big plans, that's why we're building a big plant."

Winston grew up in suburban New Jersey with fond memories of eating H&H bagels as a treat when her father had business that would take him to New York City's Upper West Side. In 2011, H&H was shut down for tax fraud, news that hit Winston "like the death of a loved one I just hadn't been in contact with in a long time," she says on her website.

"And so I embarked on what became my five year quest, through trial and error, to create a bagel I longed to eat."

Winston says a big population of native New Yorkers, along with an existing fan base built up through delivery orders and hourlong drives to Berkeley, is part of what drew her to signing a lease in Palo Alto.

"People want a good bagel down here, that's for sure, and they prefer not to drive an hour."

Joel O is a registered user.


As someone who has made the hour drive to Berkeley, as well as buying from the local markets who sell the frozen version, this is welcome news! Can't wait!


As someone who has made the hour drive to Berkeley, as well as buying from the local markets who sell the frozen version, this is welcome news! Can't wait!

Report Objectionable Content
Posted by HerbF, a resident of Palo Verde,
on Jan 26, 2022 at 11:38 am
HerbF is a registered user.


Don't need to drive to Berkeley to get a good bagel. Palo Alto's own Izzy's Brooklyn Bagels fills that bill. Boiled for that authentic bite.

How we eat away at our open space, even in Palo Alto
By Sherry Listgarten | 5 comments | 7,420 views

Three new restaurants from former Manresa chef David Kinch and his team are coming to Los Gatos
By The Peninsula Foodist | 2 comments | 4,549 views