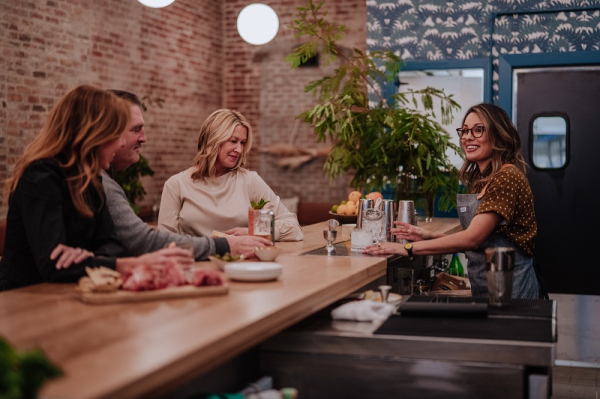 Operations manager and lead bartender Nikki Molinari draws inspiration from some of the central figures in the craft cocktail movement, including Dave Arnold, whose book "Liquid Intelligence" informed many of Fogbird's techniques. Photo courtesy Fogbird.

When the owners of 31st Union, an American restaurant in downtown San Mateo, were faced with an expiring lease in the middle of the pandemic, they decided it was time for a change. Susan Hunsaker, who ran the restaurant with her husband David, said that impacts to their business from the pandemic, rising labor costs, and a lack of available parklet seating for the restaurant were among the factors that led them to decide to permanently close 31st Union.

Turning their attention to a nearby vacancy at the shuttered bar The Downtown Tiki Lounge, the Hunsakers decided to start fresh with a new concept for a cocktail lounge.

"We wanted to keep the pieces of the business (31st Union) that were working for us, and we had built a pretty solid bar program," said Susan Hunsaker. With the lead bartender from 31st Union, Nikki Molinari, in tow, the Hunsakers set about building a cocktail lounge that puts a premium on well-executed craft cocktails with a focus on hospitality and service.

"We think we can make a thoughtfully balanced, creative cocktail that you can enjoy in a really beautiful place, with really warm and friendly service," said Susan Hunsaker. The result of their labor, Fogbird, opened on Jan. 6 at 144 S B St. in San Mateo.

Fogbird, whose name and avian logo are a nod to the Northern California coast, was intended to be designed completely differently than 31st Union, according to Susan Hunsaker.

"We wanted to completely take a 180 against that aesthetic," she said, adding that Fogbird was designed for a "post-COVID" world. "I think we're going to have a generation of people that don't want a space that's cramped or dark," she said.

And so, gone are the thatched roofs, booths, and dim lighting of the previous space to open up room for a bright, airy interior space with exposed brick walls and lush arrangements of plants that feels more like a cafe or bistro than a cocktail bar.

While the space belies the establishment's focus on cocktails, the menu certainly does not, with both classic cocktails like the daiquiri, Moscow mule, and Tommy's Margarita joining a selection of signature cocktails (priced at $16 each) made with housemade syrups and cordials. The Hunsakers gave Molinari free rein, allowing her to lean into a passion for modern craft cocktails and a penchant for molecular gastronomy. 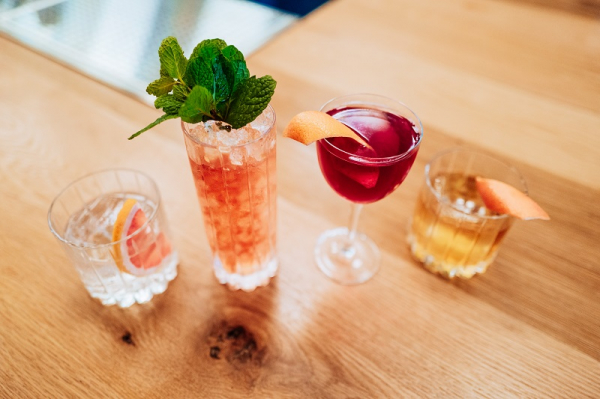 The Mr. Potato Head cocktail model
Drawing inspiration from famed New York City bar Death & Co, Mollinari has adopted a "Mr. Potato Head" model in coming up with Fogbird's cocktail menu — a method that uses classic cocktail recipes with key ingredient substitutions, much like the replaceable limbs of the toy of the same name. Fogbird's paloma, for instance, forgoes the traditional grapefruit soda in favor of a housemade grapefruit cordial, with the tartness of the drink manipulated by the addition of malic, citric, and champagne acids in place of lime juice.

This kind of thoughtful manipulation of standard ingredients is scattered throughout Fogbird's menu. In the Follow the White Rabbit, a shrub — a tart syrup of fruit juice and vinegar — is prepared by first clarifying carrot juice. To do this, juiced carrots are treated with pectinase, an enzyme that breaks down carbohydrates found in fruits and vegetables, before the juice is spun in a centrifuge to separate out its solids, yielding a clear liquid that tastes entirely like carrots. The clarified carrot juice is mixed with vodka, apple cider vinegar and a housemade ginger soda for a tall, refreshing drink packed with flavor — something many vodka-based drinks often lack. In another drink, the Dutch Windmill Cider, Mollinari blends gingerbread cookies to create a cocktail with the flavor profile of Speculoos cookie butter, adding lactic acid to lend creaminess to the drink.

Fogbird's cocktail menu also features a collaboration with a bartender from Death & Co after the Fogbird team participated in a cocktail class with the New York City bar as a team-building event. The Oaxacan After Midnight is made with a split base of añejo tequila, calvados and rum, along with vanilla and cardamom for a drink that's reminiscent of an Old-Fashioned— spirituous, with a hint of sweetness.

Besides the cocktails, the bar has sourced beers from across California, pouring selections from brewers like Laughing Monk from San Francisco and HenHouse Brewing in Santa Rosa alongside wines from France, California, Washington and Oregon. A small menu of bar bites is also available, with charcuterie and cheese boards, as well as smaller snacks like olives, almonds, and spicy fried chickpeas.

Approachable cocktails, unpretentious vibe
Though the cocktails may be complex, the Hunsakers hope to keep the bar an unpretentious space with a focus on service. Reflecting on her experience at 31st Union, Susan Hunsaker says she wants the bar to be a place where guests want to return because they feel comfortable.

"I think we did a really good job particularly with our regular crowd of making them feel always welcomed, always taken care of. And so for us, that's the brand of hospitality that we're absolutely continuing," she said.

Hunsaker contrasts this to some bars that may prefer to cater to drinkers with an established knowledge of craft cocktails. "I don't want anybody making things unapproachable," she said, a decision reflected in both the service as well as Fogbird's menu, which is simple and absent of many of the technical details of Molinari's creations.

Fogbird will also offer private and virtual cocktail classes, a practice that began at 31st Union when a planned in-person cocktail class was forced to move online due to the pandemic. At Fogbird, the virtual class experience has been upgraded, with students receiving a Fogbird-branded box containing the ingredients they need to make three cocktails and recipe cards, with additional instruction coming from a member of the bar's staff in a virtual meeting.

The bar is even planning on converting part of its basement space into a studio of sorts, where the virtual classes can be broadcast from. The Hunsakers say the classes are well received by corporate clients who offer them as employee appreciation gifts, but are also popular with groups of friends or family members who are unable to get together in person for a cocktail. Cocktail classes are available at a rate of $150 per person, with a 12-person or $1,800 minimum required for each class, which can be booked by contacting Fogbird.

Fogbird also plans to create a series of canned drinks, including its signature paloma, for customers who may want to take a bit of the Fogbird experience home. (Though recent state legislation, Senate Bill 389, places certain restrictions on takeaway cocktails that the bar will need to navigate.) Until then, you can get settled in one of the bar's 60 seats and enjoy your cocktails in downtown San Mateo.

This barbecue business was kicked out of Belmont. Now it's a Sunday fixture in Redwood City.
By The Peninsula Foodist | 2 comments | 4,750 views

Doing more with the natural spaces we have
By Sherry Listgarten | 8 comments | 3,391 views

Can the Memphis police behavior ever happen here?
By Diana Diamond | 29 comments | 1,653 views