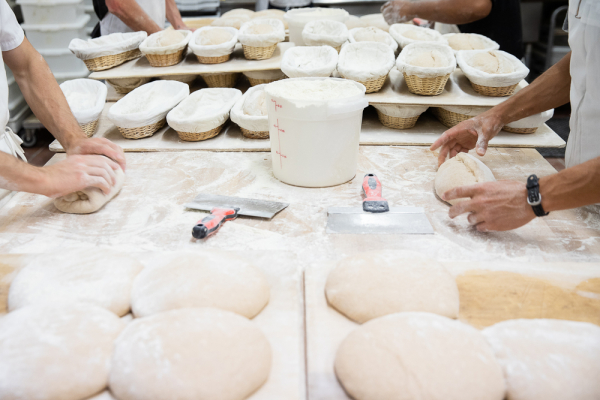 The Midwife and the Baker bakes the sandwich bread for Rozmary Kitchen's pop-up and hosts it. The pop-up returns weekly Feb. 4.

One year after launching their sandwich pop-up Rozmary Kitchen in collaboration with The Midwife and the Baker in Mountain View, Nick Rappoport and his wife Melissa Johnson are planning a weekly Peninsula pop-up after closing in November for the birth of their first child.

Rozmary Kitchen will be back at The Midwife and the Baker every Friday starting Feb. 4, serving up seasonal sandwiches made on the bakery's bread. The sesame Dutch Crunch, hoagie-style rolls that the bakery began making especially for the pop-up will return, along with sandwiches made on sesame rolls and ciabatta. They're also offering a salad option again, with the current Big Ol'Market Salad ($10) featuring pickled veggies, lettuces, cucumbers, citrus, chickpeas, crispy shallots and seeds and creamy red wine tahini vinaigrette.

"Every sandwich is unique," Rappoport says. "Most of our product is housemade: the pickles, all the sauces, aiolis — just keeping it fresh and simple."

Rappoport, a chef who's cooked at The French Laundry, Outerlands and other Bay Area restaurants, was working as Pinterest's chef de cuisine at the start of the pandemic when he was furloughed and eventually laid off. He began working on baking rolls and creating sandwich recipes, and when Johnson, a catering manager at Stanford University, brought home bread from The Midwife and the Baker, it inspired an idea for collaboration. Rappoport already knew bakery owner Mac McConnell, and the two formed a partnership to develop the hoagie-style Dutch Crunch roll.

The Fanucchi sandwich, served on a sesame roll with pistachio mortadella, soppressata, capicola, sharp provolone, "shredduce," cherry pepper relish, onion and aioli, is back and will be a menu mainstay, while other sandwiches will switch out roughly every three months. It's partly seasonal, partly strategic, according to Rappoport.

"Down the road, we plan to open a brick and mortar," he says. "We're not sure where or when, but this gives us a chance to test out the sandwiches and see which ones people gravitate toward so we can get a collection of big-hitters for a menu when the time comes to open up."

Rappoport says he takes inspiration from a collection of different recipes he's developed over time, which leads to "mix and matching all these things I'm working on over time."

"I have all these different ingredients I make homemade and put in different sandwiches as I go," he says.

Johnson says she and Rappoport learned a lot during the first year of their pop-up, between tasks like operating in farmers markers and running online ordering, and are eager to return to Mountain View.

"It was really sweet: When people found out we were having a baby, people were congratulating us, giving us gifts, checking in with us as we've been on leave," she says. "We're really appreciative of all of our customers and really excited to see what's going to happen this next year."

Sandwich lover is a registered user.


Honestly, these sandwiches are so good that I put a reminder on my calendar to preorder my sandwich(es) on Wednesdays for a Friday pickup at the bakery. Try it. You won't regret it.

How we eat away at our open space, even in Palo Alto
By Sherry Listgarten | 5 comments | 7,407 views

Three new restaurants from former Manresa chef David Kinch and his team are coming to Los Gatos
By The Peninsula Foodist | 2 comments | 4,543 views