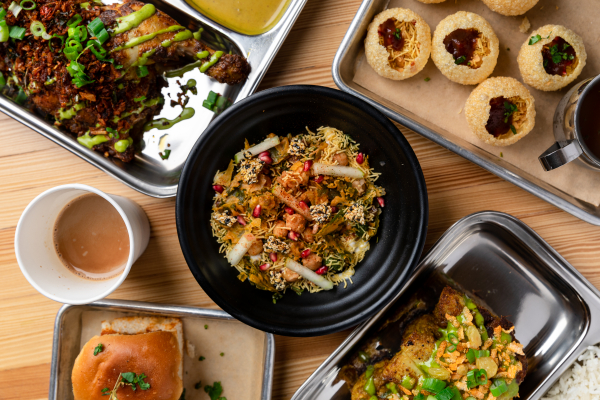 Little Blue Door’s cuisine is inspired by Gopinathan’s native state of Kerala but presents dishes that draw from street foods throughout the country of India. These chaat-inspired starters include interpretations of Kerala’s egg puffs, which envelop hard-boiled eggs and seasoned onions in flaky pastry, and vada pav, fried vegetable patties made here with fava beans sandwiched in buttery bread. Gopinathan is especially enthusiastic about recreating Kerala fried chicken, traditionally fried in wide cast iron pans filled with bubbling oil, which will be served with an aioli flavored with garlic, ginger and fresh herbs.

As a main course, diners can enjoy roasted chicken marinated in kashundi, the fermented paste of mustard seeds and green mango, and cauliflower coated in a crunchy layer of puffed rice, both slowly cooked on the rotisserie. While Little Blue Door at State Street Market is the first casual restaurant from the team of Gopinathan and Thapar, they are looking to open more locations of this more informal concept.

Little Blue Door is now open with limited hours and will eventually match the opening hours of State Street Market, which are 11 a.m. to 8 p.m. Sundays and Wednesdays and 11 a.m. to 9 p.m. Thursday through Saturday.

Jennifer is a registered user.


Can't wait to try the food but hoping State Street Market as a whole improves. Wait times for food to arrive are long, it takes forever to get served at the bar with only one bartender taking care of all orders, the metal chairs on concrete floor make the hall incredibly loud and ordering via phone menu needs to be improved. It has tons of potential but the experience doesn't live up to the hype...yet


Personally I have only had great experiences at the market. f On each visit, the food was fantastic, service very personable and efficient. The setting is very nice and offers many seating options. I would rather dine there than in Palo Alto.

How Much Time do You Spend Outdoors?
By Chandrama Anderson | 0 comments | 1,397 views