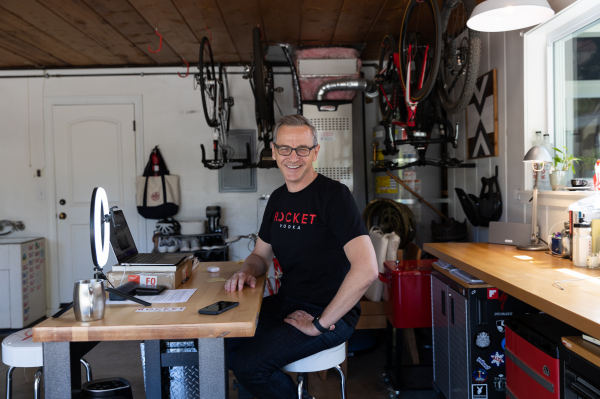 
Like so many tales of Silicon Valley entrepreneurship, Rocket Vodka’s origin story takes place in a garage. But it wasn’t a technological revolution that founder and Menlo Park resident Dariusz Paczuski was chasing — it was the memory of apples from his childhood, and a desire to make a premium vodka.

Though Paczuski’s first distillation was in a Menlo Park garage, he says his connection to the spirit runs deep, and far back in time. “The first time I drank, it was vodka,” he says, adding that “vodka was always my go-to spirit.” Born in Poland but raised in the United Kingdom and Norway, Paczuski’s early memories of vodka at the dining table are a throughline to his Polish heritage, with shots of vodka serving as the de facto beverage pairing and perfect foil for the salty, rich and meat-laden cuisine he grew up around.

When Paczuski’s parents had saved up enough money to buy the family’s first house in the Norwegian town of Drammen, they found themselves on a property that was also home to apple trees in its backyard. As a child, Paczuski was often dispatched to harvest fallen fruit from the ground. “They were the sweetest and the ripest,” he recalls, describing the apples his mother would juice for his father to ferment into alcohol. 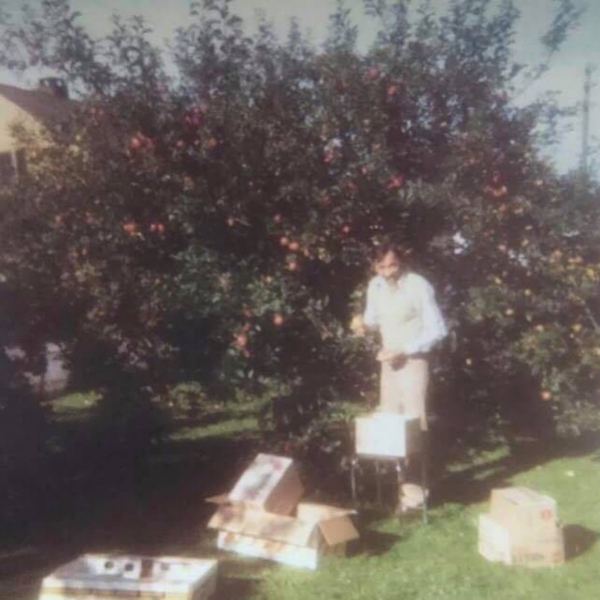 Dariusz Paczuski's father picks apples in their backyard in Norway, where Paczuski grew up, in this photograph taken in the late 1970s. Photo courtesy Dariusz Paczuski.

The son of a glassblower and a hobbyist distiller himself, Paczuski’s father had used some old tools to piece together a makeshift still out of copper pipes in the family’s root cellar. There, he would distill the fermented apple cider into a spirit before aging it in casks to make an apple brandy. “During the distillation phase, when it (the spirit) was starting to drip out, he’d let me put my pinky into it and taste it,” Paczuski says. It’s the memory of that apple brandy that later inspired Paczuski to produce his vodka from a base of apples.

The Nordic backdrop of Paczuski’s childhood did more than just set the stage for a future in craft spirits: It also inspired in him a love of skiing. Many years later, after moving to the United States, Paczuski would earn the nickname “The Polish Rocket” from a buddy, a reference to his penchant for speed on the slopes. Paczuski filed it away in his mind as the perfect name for a vodka brand — an idea that he had already started toying with.

In 2015, Paczuski was introduced to a local home distiller via a mutual friend. The distiller, who worked at Google by day, had made batches of his own vodka and was happy to be a resource. With some guidance, Paczuski decided to give it a shot.

“I went to the Menlo Park farmers market. I bought some Granny Smith, Red Delicious, and Fuji apples,” Paczuski says, intending to find the perfect varietal for vodka production. After coring and mashing the apples, he mixed them with warm water and yeast and left them to ferment for three weeks.

That first batch was mostly unsuccessful. As Paczuski was learning, not all ferments are created equal, and making vodka from apples would prove to be a bit more challenging than making it from grain, potatoes, or corn (some of the typical base ingredients for vodka).

The Granny Smith juice had grown mold, even giving Paczuski a rash after he tasted the ferment. The Red Delicious juice didn’t appear to be dangerous, but hadn’t fared much better, with the apple’s flesh being too fibrous and absent of fermentable sugars to produce enough alcohol. But with the juice of the Fuji apples, Paczuski had found success. He’d eventually settle on a blend of Fuji and Golden Delicious apples, with apple juice and concentrate added to boost the natural sugar levels and aid in fermentation. 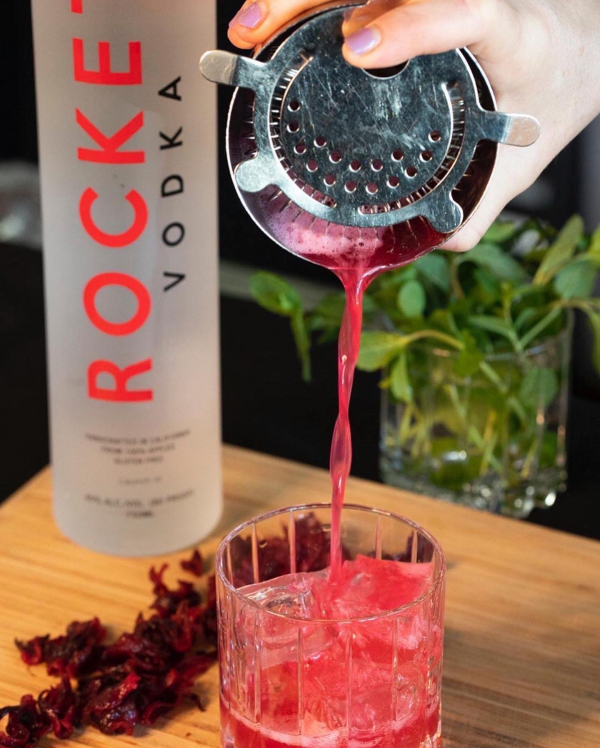 Rocket Vodka is made from apples harvested near Sacramento that are fermented and distilled in small batches. Photo courtesy Rocket Vodka.

Today, Rocket Vodka has scaled its operations out of a garage to Dry Diggings Distillery in El Dorado Hills, northeast of Sacramento. There, apples harvested from nearby Apple Hill, are fermented and distilled in small batches to a boozy 190 proof spirit (that’s 95% ABV) before being cut to a more palatable 80 proof vodka (40% ABV), with mountain water sourced from the Sierra Nevada foothills.

The brand has grown steadily, and retailers like The Willows Market (Rocket Vodka’s first retail distribution account), Draeger’s Market and K&L Wine Merchants, along with bars and restaurants like Ettan, Terún, and Flea Street Cafe, all stock Rocket vodka on shelves or behind the bar.

Though Paczuski, who also has a job in marketing, runs Rocket Vodka with the care and attention of a full-time business, it ultimately sits somewhere between a passion project and side hustle for him. “I’m not in a rush to turn this into a multibillion-dollar brand,” Paczuski says, noting that this approach affords the business some flexibility to do good.

At the end of February, as images from the Russian invasion of Ukraine dominated the news cycle and refugees began arriving in Paczuski’s native Poland, he thought of his own parents, who fled the country to escape Soviet oppression. Paczuski wasn’t alone – his business partner, Dmitry Lipkin, was born in Ukraine, in the now besieged city of Kharkiv. “The hospital I was born in, the school I went to, the building I grew up in … everything’s been demolished,” Lipkin says.

Given vodka’s popularity in Eastern Europe, Paczuski’s two worlds began to collide. Stories began appearing of bars and liquor stores removing Russian vodka from their shelves. “A bunch of people were suggesting to me like, ‘Oh, you should take advantage of this,’” Paczuski says. “That just didn’t feel right to me … I don’t want to be a war profiteer.”

Less than a week after the invasion, Paczuski, his wife and Lipkin put their heads together to figure out how Rocket Vodka could help. Lipkin went as far as considering flying to Ukraine to try to help in some way, an idea his wife would later talk him out of. But after seeing that World Central Kitchen — the aid organization founded by celebrity chef José Andrés — had taken up the cause of feeding those displaced by the war on the Polish border, Paczuski and Lipkin’s minds were made up. 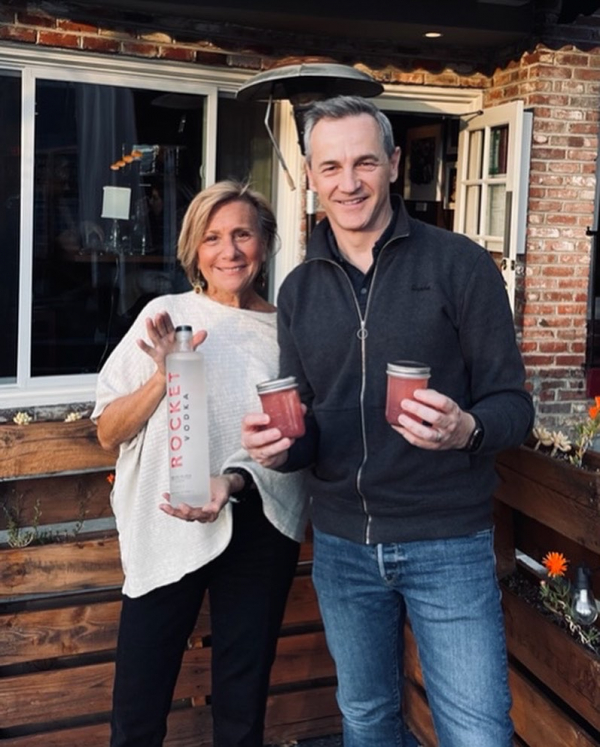 “It was the most obvious choice for us,” Paczuski says when describing their decision to support World Central Kitchen. In a video statement posted to Rocket Vodka’s social media accounts, Paczuski and Lipkin announced that they would be donating 100% of Rocket Vodka’s profits for the month of March to World Central Kitchen, an effort that would raise close to $4,000 for the organization. Rocket Vodka also partnered up with Flea Street Cafe in Menlo Park to place a special cocktail on the menu: The Peace Rocket, made with Rocket vodka, Cointreau orange liqueur, cranberry, and lime juice. Flea Street donated profits from sales of the cocktail and a Ukrainian borscht to World Central Kitchen and Nova Ukraine, a Ukrainian aid organization.

In the weeks since those fundraising efforts began, the war in Ukraine has continued to escalate. Lipkin’s home city of Kharkiv has come under sustained attack, with one Russian missile strike reportedly destroying a local restaurant that World Central Kitchen was using to prepare food. The evolving situation has led Rocket Vodka to extend its fundraising efforts into the month of April, for as long as the business can sustain it.

As Paczuski looks toward Rocket Vodka’s future, he says he wants it to be recognized widely as “a great vodka brand.” He may well get his wish — Rocket Vodka has racked up numerous awards at spirits competitions, including being named best vodka at the 2017 SIP Awards International Spirits Competition.

Paczuski is keen to credit the universe for playing a part in Rocket’s success, noting the random presence of chance that led him from tasting his father’s apple brandy to finding a home distillation expert, and ultimately, to being able to aid humanitarian efforts on the ground in his homeland. “In life, but especially with Rocket, serendipity is key.”