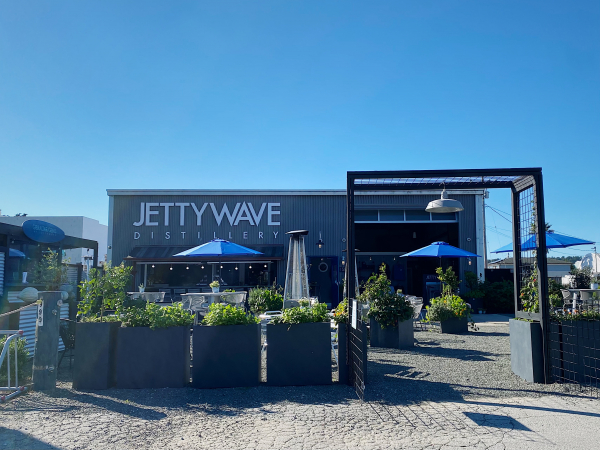 As a local business ourselves, we at Embarcadero Media understand the hardships restaurants have faced over the last two years through the pandemic. To support our local dining scene, Peninsula Restaurant Week is back for its second year May 13-21 featuring special dishes from your favorite eateries.

For more information about Peninsula Restaurant Week, go to peninsularestaurantweek.com.

Jettywave Distillery in Half Moon Bay serves up cocktails made with the house spirit, Half Moon Shine, and a Mediterranean-inspired menu. Award-winning distiller Anthony Marinese oversees the spirits, and chef Jose Luis, known for his time at the now-closed Cafe Gibraltar, prepares internationally influenced dishes including chicken and beef skewers served with lemongrass and coconut rice and grilled local salmon in a tamarind and Half Moon Shine glaze.

I spoke with CEO Mishelle Westendorf about why readers should make a trip out to Jettywave during Peninsula Restaurant Week.

This conversation has been edited for clarity and brevity.

Peninsula Foodist: How did you start this distillery, going from an idea to opening in five months, and while doing at least two other jobs, if not three? (Westendorf also runs a real estate company and teaches spin classes.)

Mishelle Westendorf: It's funny, it was during COVID. And when they basically said that all the restaurants were closing down, everything was to go, this building became available. And as the best friends that we are, all three of us partners, we wanted to find a place where we could commute by bike, paddle and pedal there. We want to be able to bicycle, upcycle and recycle.

The reason us partners got together was: What can we do in Half Moon Bay to bring locals and tourists together that doesn't have to be inside, and how can we make it work? What can we do to be environmentally conscious, yet have a lot of fun?

The distillation part was something that just came because this was already approved to be a distillery and we thought, “Hey, let's do it.” At the distillery we recycle the water, we give all of our grains to the local farmers for feed, so nothing goes down the drain and the water is recycled. Truly, it's just been a lot of fun.

Peninsula Foodist: How did you decide to start with moonshine as a spirit?

Mishelle Westendorf: So we are a bourbon distillery. We're going to be known hopefully for a bourbon. Anthony had over 20 awards for his bourbon in New York. And we have 53 gallons aging right now. But in the meantime, we needed to make money so that we can keep this business open. And so we decided on moonshine, because it was like Half Moon Shine. So we actually trademarked the Half Moon Shine. So it's now a brand new alcohol in the spirits industry.

Moonshine is right before it goes into the barrels to become bourbon. So it's basically before it's aged, so it's really angry. Moonshine is a little angry, and it's got a little bite to it.

And so now we got our vodka bottled, and we've got our gin, our labels come in about three weeks, and then we'll be ready to open up for our tasting room.

Peninsula Foodist: And I was wondering if you could tell me a little bit about the branding. There's a focus on sustainability but also there's a cultural idea that's expressed. This is a Coastside brand, a Coastside place. Can you tell me what that means?

My husband is a marketing guru and used to work for TBWA\CHIAT\DAY. He's helped create Budweiser commercials and created brands. And so the marketing part is kind of his baby. Kimberlee (Weaver) has really been a part of the marketing staff as well.

When we came up with the name, we were like, “We’ve got to have something that's local and that's a part of us.”The jetty is such a big part of our community. It's so funny because now that we're here on the corner, trucks and cars, they'll just honk and wave. It's so cool to feel and see that. 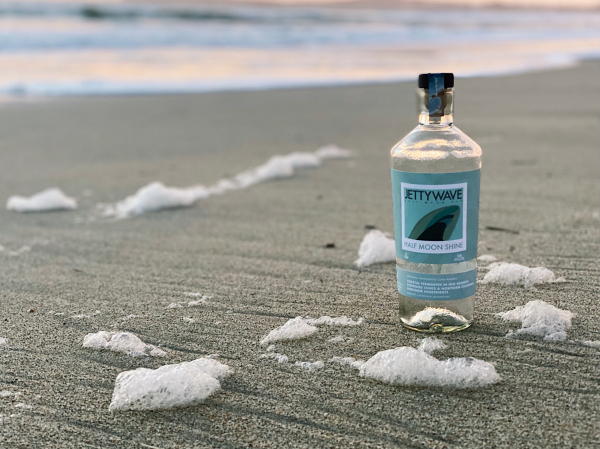 Peninsula Foodist: If people come out for Restaurant Week, what should they expect?

Mishelle Westendorf: Chef Jose Luis is doing all of his Mediterranean delights, and he's doing a bobotie, which is a South African rice and meat dish. Ground beef, curry, apples and raisins served over coconut rice. And then we're giving a 20% discount on cocktails.

The Half Moon Bay Band will be playing that week. And if anybody wants to sign up for tastings, even though it's not all of our alcohol, we will hopefully have our gin, vodka and Half Moon Shine for tasting. So if they want to set up a distillery tour that week, or a tasting or a mixology class, they can make their own drinks.

It's a lot of fun, watching people make their own drinks. It's hilarious. They think it's easy being a bartender.

Peninsula Foodist: What else should people do if they're coming out to the coast for the day?

Mishelle Westendorf: They definitely should go to Mavericks, a beautiful beach. You can park here and walk from Jettywave to Mavericks. It's got all the sea urchins out there. And, when the tide is low, you've got all the tide pools. I would definitely recommend Fitzgerald Marine (Reserve), it's unbelievable.

Three new restaurants from former Manresa chef David Kinch and his team are coming to Los Gatos
By The Peninsula Foodist | 2 comments | 4,659 views