4 years in, Bevri's quest to spread Georgian cuisine is only beginning 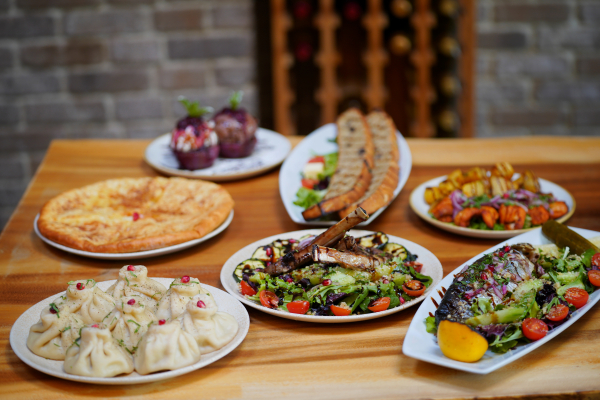 In order to preview Peninsula Restaurant Week, which is back for its second year May 13-21, we're speaking to the restaurateurs behind your favorite local eateries.

For more information about Peninsula Restaurant Week, go to peninsularestaurantweek.com.

In 2018, we covered the opening of owner Pavel Sirotin's Bevri in Palo Alto, which claimed to be the Bay Area's only Georgian restaurant at the time (Tamari has opened in San Carlos since then). After a positive review from the San Francisco Chronicle and an appearance on KQED's "Check, Please!," guests are showing up seeking Bevri's signature khachapuri, bread filled with gooey cheese and topped with a runny egg yolk, and juicy khinkali, dumplings holding beef and pork or lamb.

But even with the press, Sirotin says there's still plenty of work to do in spreading Georgian cuisine across the Bay Area, an effort he’s personally undertaking as Bevri plans to open a second location on Los Altos' Main Street soon.

This conversation has been edited for clarity and brevity.

Peninsula Foodist: How did you decide to open Bevri?

Pavel Sirotin: My wife and I like having guests. Both of us worked in a hotel. That's where we met actually. So we were always passionate about hospitality, restaurants and food. We're huge foodies.

When this opportunity came up, we just jumped on it. And the reason we chose Georgian cuisine came from my wife's side. My wife's family had a lot of Georgian friends. So she was very familiar with the culture.

When we moved to California, we noticed that there were no Georgian restaurants. And that was a huge opportunity for us to introduce the culture and cuisine here in the Bay Area.

Peninsula Foodist: So you and your wife are both Russian, not Georgian. It's a big undertaking to open one of the only restaurants serving a cuisine that's not even your own heritage.

Pavel Sirotin: We're familiar with the country and culture. Georgians have this concept of supra, a large table full of food and wine and celebration. So all of that, so we just wanted to bring it here. Actually, the name Bevri means "a lot." As in a lot of food, a lot of friends, a lot of drinks, a lot of songs. Everything is in abundance.

It took a while to educate locals, and it still does. Our team has to explain a lot about what Georgia is. Georgia has the same name as a U.S. state. So we have to explain the difference.

All the dishes are very foreign (to most diners). It's not a burger, you don't need to explain that.

It's a really interesting journey, and it's fulfilling to see how curious people are, especially with the wine. People here like drinking wine, but they’re used to very specific grapes and tastes. It’s interesting to see people learn something new about not only Georgian culture, but also tastes and textures.

Peninsula Foodist: Can you tell me a little bit more about Georgian wine?

Pavel Sirotin: Georgia is the birthplace of wine. UNESCO found that Georgia produced wine 8,000 years ago. They found evidence of the clay pots. They bury the clay pots underground and ferment the wine there for a few months. And the grapes that they grow, they're very unique to that area.

The color and the texture of the wine is so different. They even call (one variety) amber wine because it's very dark and rich. And it's particularly interesting because the country is so small, yet they managed to cultivate many different grapes.

Peninsula Foodist: And I saw you put a fundraiser link for Nova Ukraine at the top of your website – has your business been affected in any way by the war in Ukraine?

Pavel Sirotin: Definitely, we saw our guests were very concerned. When the war started, we were also very concerned because we have friends and family who are affected. We are very sad, so we're doing everything we can to show support. We're friends.

WilliamR is a registered user.


When I see a headline about "Georgian cuisine" my first thought is pecans, peaches and grits. Oops...wrong Georgia.