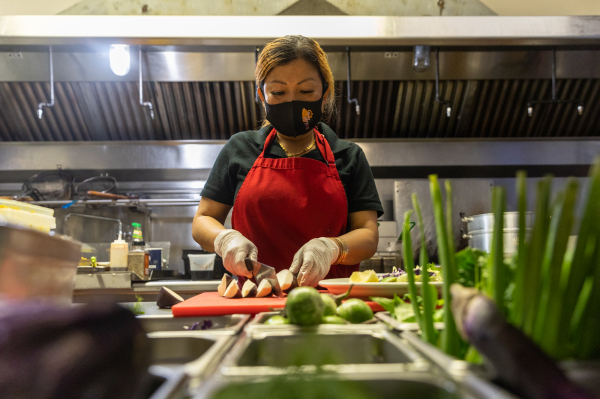 A pop-up born out of necessity
On weekends, a banner unfurls from the awning at San Bruno’s Pho de Nguyen and advertises Sitha Yim’s “authentic Khmer food.” In a time when pop-ups attract tens of thousands of social media followers and boxes of poppy seed bagels and black sesame egg tarts sell out months in advance, temporary restaurants seem trendy and glamorous, opportunities for chefs to cook with unrestrained creativity and without the headaches of managing payrolls and increasing rents.

But Yim, owner of Sitha’s Khmerkitchen, is neither a pastry chef exchanging the chef whites of an acclaimed restaurant for a chance to craft her own menu nor a tech employee pursuing a passion while living off of a stable salary. Instead, she learned how to cook most of her Khmer recipes from watching her mother and YouTube videos. A single mom who derives most of her income from the pop-up but also works three other jobs, Yim sources infant formula and diapers for Cambodian community members and carefully sculpts the brows of microblading clients in between dropping off orders of her twa ko, sausages stuffed with beef, rice and galangal (often described as a more citrusy relative to ginger).

Yim is part of a movement of entrepreneurs selling dishes that are hard to find locally and sourcing customers from immigrant communities on social media. With the lack of Cambodian restaurants on the Peninsula and just a handful of eateries in Oakland and San Jose, Sitha’s Khmerkitchen, which pops up at Pho de Nguyen on weekends and also offers catering, is one of the few places to enjoy the cuisine’s signature dishes in the Bay Area. Oakland’s Nyum Bai was named one of Bon Appetit’s 10 best new restaurants in 2018 with a menu that resembles Yim’s, but the honor hasn’t resulted in widespread openings of Cambodian restaurants locally.

Inside Sitha’s Khmerktichen, however, diners find comfort in prahok ktiss, minced pork simmered in coconut milk with fermented fish. Served as a dip, it infuses the cabbage and eggplant dunked into it with a forceful punch of umami and heat. Orders also pour in for the dancing shrimp salad containing seafood that is raw and translucent, barely visible underneath vibrant red chili flakes and bright green herbs. However, just three years ago, Yim had never even prepared many of these items. 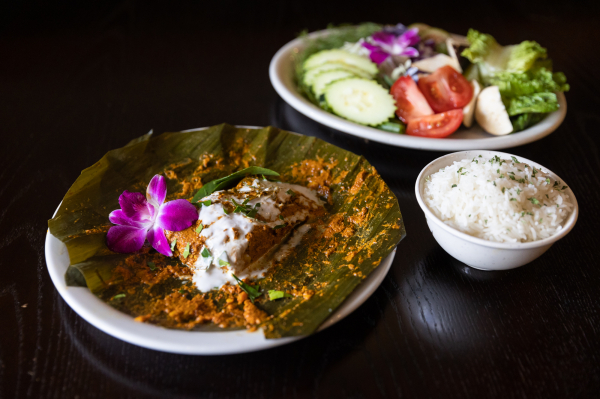 The amok trei at Sitha’s Khmerkitchen is prepared by steaming salmon with kroeung, a paste of aromatics including turmeric, garlic and galangal, inside of a banana leaf. Photo by Magali Gauthier.

Connecting with Cambodian communities
Arriving in San Francisco at 7 years old after leaving Cambodia for “too cold” Chicago in 1984, Yim’s childhood centered around Nagara Dhamma Temple, a Buddhist temple started by her parents. Prohibited from participating in extracurriculars, Yim washed dishes, cleaned and helped out seniors at the temple after school. Service to others, especially the elderly, became a paramount value in her life. “I help others before myself, and sometimes I shouldn’t be doing that,” she says.

In 2019, just before the pandemic, Yim moved back in with her mother under the fog-filled skies of the Sunset District. Her younger brother had just died at the age of 33, and she had finalized her divorce after a six-year process and found herself as the sole caretaker for her two children. “I didn’t know what to do,” she says.

Yim, who had previously owned a donut shop and ran a Houston location of a Southeast Asian-Cajun seafood restaurant, took a suggestion from a friend and started selling the sweet and spicy Cambodian beef jerky that’s often served warm and fried to a point where it shatters in the mouth. However, drying meat in San Francisco meant that Yim scurried around the home placing trays of beef strips in the living room, on the balcony and even on the stairs depending on where the sun was shining. Rainfall or dense fog forced Yim to burst through the doors to her mother’s balcony in order to rescue her product from the falling water.

Meanwhile, Yim found herself returning to the communities she grew up in as a child. In between delivering bags of beef jerky, Yim started working as a case manager for Cambodian Chinatown residents struggling with mental illness and continued interpreting for Khmer speakers and assisting seniors with paperwork at her parents’ temple. She made sure to instill an appreciation for Cambodian culture in her children, 9 and 15, giving them chores in Khmer and refusing to default to English even when they responded with a puzzled stare. 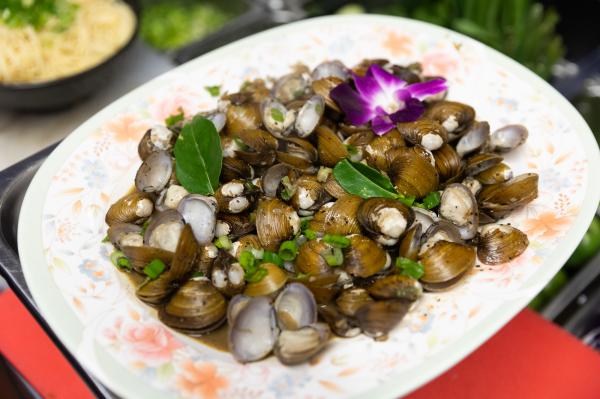 The freshwater clams at Sitha’s Khmerkitchen are cooked in garlic, topped with green onions and basil, and served with a tamarind dipping sauce. Photo by Magali Gauthier.

Building a business through social media
Eventually, Yim upgraded to a small dehydrator purchased on Amazon, but it couldn’t keep up with mounting demand as she finely tuned the sweetness and heat of her recipe. “At first, I didn’t know how to make (beef jerky). So I went to YouTube, and I’d be watching 10, 15, 20 (videos) all night,” she says. Thanks to social media groups populated by Cambodian Americans missing the taste of home, jerky orders ballooned from 10 to 400 pounds a week, a sum that could no longer be tucked away in the corner of her mother’s home.

Selling primarily through Facebook and Instagram also meant that Yim’s business was a two-way conversation, with customers reaching out whenever they craved chicken wings meticulously deboned and stuffed with spices and glass noodles or papaya salad prepared with the essential element of raw pickled crabs known as salted crab. Yim spent more time in the glow of cooking videos on her phone and continued seeking her mother’s guidance, never wanting to turn down students craving their family’s cooking or working professionals without the time to slowly simmer soups. “I just wanted to make every dish that they ordered … all of a sudden, I had a full menu,” Yim says.

Among Yim’s social media customers was the owner of San Bruno’s Pho de Nguyen, Phong Nguyen, and the two of them started chatting about how business at the restaurant had slowed since the start of the pandemic. Eventually, Nguyen and his fiancé proposed that Yim host a three day pop-up in December 2021, and the space filled up with customers seeking the opportunity to taste Yim’s cooking in a restaurant setting. Nguyen then asked if Yim would be interested in taking over the space on weekends. 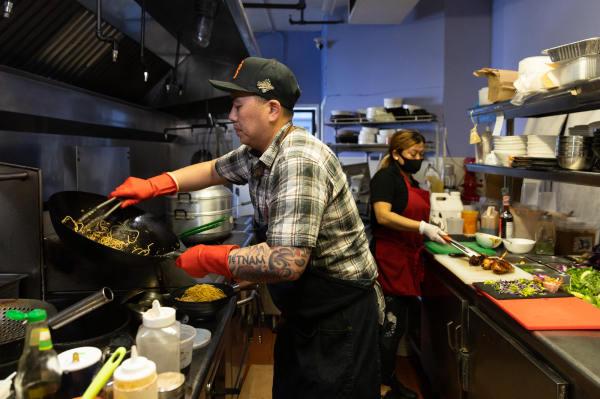 Creating a home for Khmer cuisine
At this point, Yim’s frequent YouTube searches, piles of tasting spoons and attentive measurements of fish sauce and sugar had started to fade away. While immigrant parents and grandparents usually cook with intuition and struggle to notate their recipes, Yim says her mother is the one now panicking in her daughter’s kitchen. She expresses shock when she sees Yim confidently tossing handfuls of lemongrass into pots instead of carefully measuring out each cup.

And when it came to the question of staffing, Yim knew that she could turn to her family for help. “(My daughter) says she’s seen how I’ve always struggled. To survive, to have income, to put a roof over our head,” Yim says about her daughter, Ping. She works as a server at the pop-up and busses tables in a similar fashion to how her mother once spent her evenings scrubbing floors at the family’s temple. Yim’s boyfriend and mother also help out in the kitchen. 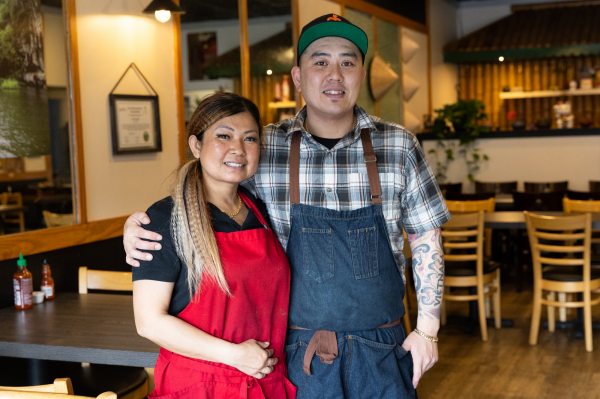 Shortly after accepting Nguyen’s offer to operate Sitha’s Khmerkitchen on weekends, Yim started seeing her dining room crowded with customers, including Cambodian Americans traveling from across the United States. While the menu’s pictures are slightly blurry and still bear the bold white font that adorned them when Yim first shared them on Instagram Stories, her cooking now reflects hours of repetition and her obstinate dedication to Cambodian cuisine (while still conveying an understated, homemade presentation). The platter of raw vegetables that surrounds the prahok ktiss is organized by color, with a row of verdant green bell peppers, lettuce and cabbage fading into translucent slices of white onion. She’s figured out how to fit time into her schedule to pick up crawfish shipped from Louisiana at the airport, as her menu also includes an entire Cajun section that draws from her Houston days and includes gumbo, étouffée and po’boys.

Yim is eyeing a full restaurant as she continues to grow her customer base, but high food, rent and staffing costs still present substantial obstacles. In the meantime, Yim will continue her hectic weeks of home deliveries and shipping out sausages and jerky amid her many other jobs.

Regardless, she’ll always prioritize her family, who are the motivation behind her restaurant. “I’m not just thinking about myself. I’m thinking about (my childrens’) future too. That’s why when I work, I work. I don’t complain, even though I’m tired: I still keep going,” she says.