Hold my stein: Here’s your guide to Oktoberfest 2022 around the Peninsula 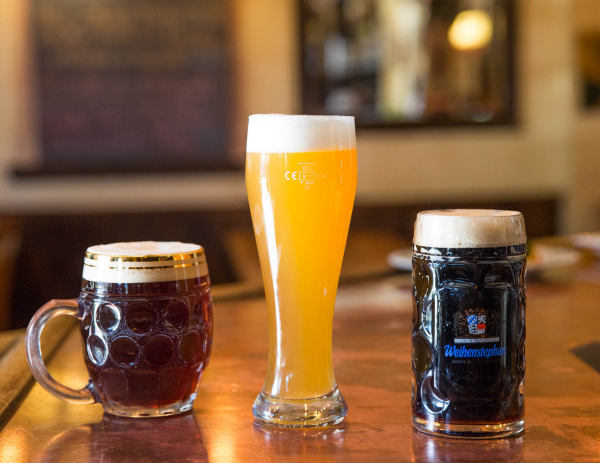 Gourmet Haus Staudt is among the local restaurants and bars hosting Oktoberfest events this year. (Photo by Michelle Le)

For the first time since the onset of the COVID-19 pandemic, Oktoberfest, the fabled beer festival held in Munich, Germany, has returned. What began in 1810 as a royal wedding celebration has morphed and expanded over the years to an annual festival that now welcomes over 6 million guests from all over the world, according to the city of Munich’s official website.

The event, widely known for its massive tents filled with rows of benches, carnival rides, German attire, food and of course beer, traditionally runs for 16 days at the end of September, ending on either the first Sunday of October or Oct. 3 (German Unity Day) — whichever comes later.

Over the years, the spirit of Oktoberfest has spread throughout the world, with many major U.S. cities hosting their own festivals, and the term is now used colloquially to refer to any number of raucous, lederhosen-clad, beer-soaked celebrations. Oktoberfest beers in the style of the Munich lagers poured at the festival are also widely available from German and domestic producers alike. If you haven’t booked your flights to Munich for the real thing, you can always indulge in some of the local Oktoberfest festivities taking place right here on the Peninsula. As they would say at Oktoberfest, “Prost!”

The food menu will include schweinebraten, a rich and hearty roast pork stew, as well as a selection of German sausages, potato salad, sauerkraut and red cabbage.

The restaurant, which always has a stellar selection of 11 traditional German beers on tap poured alongside domestic craft offerings, will have special Oktoberfest beers in addition to wine and cider, with pretzels, bratwurst and more available to eat.

Stop by the German market in front of the beer garden before then to pick up some accessories to complement your Oktoberfest attire.

Admission costs $20 at the event, and those under 21 years old can get in for free.

Steins Beer Garden food and drink specials
Although Steins in Mountain View has yet to resume its paused pre-pandemic Oktoberfest party, the restaurant has added a number of Oktoberfest specials available Sept. 17 to Oct. 3.

In addition to its standard menu, Steins will be serving a pork schnitzel with gravy, a platter of Bavarian sausages and a pork stew. Their beer list, which rotates often, always includes a few German mainstays to wash down your food, and Steins says they’ll also be adding special Oktoberfest brews.


Oktoberfest in downtown Redwood City
From Sept. 21-25, Redwood City will play host to its eighth annual Oktoberfest celebration. The celebration will center around a large tent in downtown’s Courthouse Square. The event’s main stage will be host to a number of bands performing traditional German folk music, and vendors will be on hand to supply seasonal Oktoberfest beers, pretzels and bratwurst. The organizers have also planned a stein-holding competition, a traditional German drinking game where players see who can hold a full liter stein of beer in their outstretched arm the longest. The event will also feature dance and yodeling contests.

The festival, which is a ticketed event, runs from 5-9 p.m. on Wednesday, Thursday and Saturday, 5-10 p.m. on Friday, and from 4-8 p.m. on Sunday. On Saturday from noon to 4 p.m. and on Sunday from 11 a.m. to 3 p.m., the festival will offer a more family-friendly afternoon seating. Be warned, although the festival is outdoors and all ages are welcome, there are no dedicated children’s activities, and pets are not allowed inside the festival tent.

Tickets for the festival cost $16-$27 depending on the day and time, with options between $10 and $17 for those who are underage or aren’t drinking, and are available for purchase online, or at the festival. Each ticket includes a commemorative beer stein and a complimentary drink ticket.

The festival’s organizers boast over 1,100 square feet in the event tent, with “family style” bench seating mirroring the traditional beer tents of Munich’s Oktoberfest. If you’re attending as part of a large group, a VIP package is available for $225, including admission and reserved seating for six, a dedicated event entrance and 12 drink tickets.

For groups, Ludwig’s offers table reservations for the duration of each day’s celebration for $145.

If you’re looking to host your own Oktoberfest event, Ludwig’s is also offering catering packages for groups of 30 or more, featuring either finger foods or a full buffet of German classics like schnitzel and spaetzle.

The centerpiece of the festival is its Biersch Garten tent, featuring brews from San Jose-based, German-inspired Gordon Biersch Brewing Company. German-style bratwurst and other sausages are available from San Joaquin County purveyor Lockeford Sausage, alongside other traditional German drinking food like pretzels and German potato salad. The festival will also have a number of other non-German food offerings like jerk chicken from Spicy Roy’s Grill in San Jose.

In addition to the food, concerts and craft vendors, Campbell Oktoberfest will hold three contests: a best-dressed costume contest for those donning traditional German garb, a stein-holding contest and a Braumeister competition open to ambitious homebrewers who think their Oktoberfest-style lagers could hold up to the discerning tastes of judges, including Gordon Biersch Brewing Company owner Dan Gordon.

Admission to the event is free, though drink tickets are available for advance purchase.

(We’d be remiss to talk about German beer gardens in the Bay Area without mentioning Wursthall in San Mateo. Though the restaurant isn’t holding an Oktoberfest event, their manager did mention they plan to make plenty of Oktoberfest beers available on tap during the festival season.)

Greta sacchi is a registered user.


Thank you for providing these details.

What Do You Get Out of Being Stubborn?
By Chandrama Anderson | 0 comments | 1,793 views