A reader’s question answered: What happened to the in-house breads at Esther’s German Bakery? 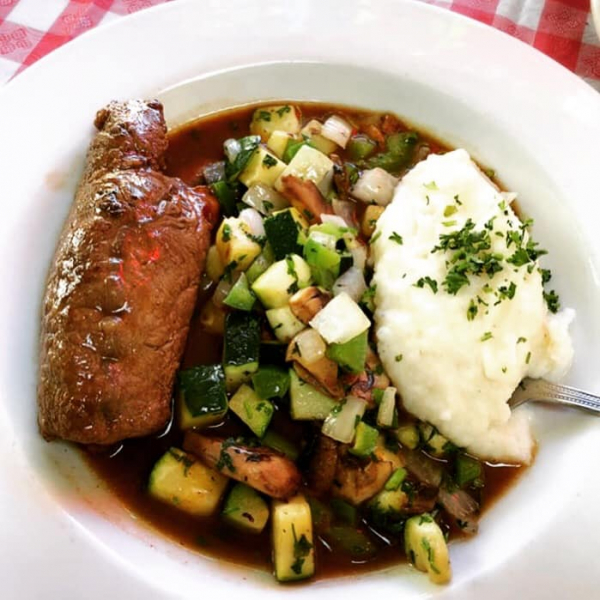 This story was prompted by a question from reader Larry Chow. In an email, he asked the Peninsula Foodist, "Do you know what happened to the bakery part of Esther’s? Yesterday I went to the Los Altos restaurant and the clerk said the bakery is no more. Breads on the counter were from a different bakery. I miss her cheese pretzel and seeded sticks."

According to the restaurant's owner, Alex Otero, the original owner, Esther Nio, sold the business in 2016. The person who bought it from her ended up selling the bakery to someone who just wanted the equipment, Otero says.

A longtime cook at Esther's, he says he stayed because he felt a responsibility to keep things running as usual in the kitchen, making food the way he was used to.

He says he found an outside supplier to provide bread, pretzels and some pastries and cakes, but other menu items remain the same.

“Part of the business is no longer what it used to be," he says. "I'm proud to say we were able to save the restaurant. (We're) still serving the German community."

They continue to offer music the third Thursday of each month, a time when the community comes together over beer and sausage.

"I think a lot of the good stuff we were able to keep going," he says. "We're happy to keep it going as long as we can."

Do you have a Peninsula food or dining question for us to look into? Email associate editor Kate Bradshaw at [email protected]

MyOpinion is a registered user.


The Steiner Bread is no longer available? we used to buy it at Felipe's market Sunnyvale. Or is someone else making it under Esther's label?

Report Objectionable Content
Posted by harvardmom, a resident of Monta Loma,
on Jan 2, 2023 at 10:15 am
harvardmom is a registered user.


A reader's Q and A is an interesting and fun addition to the Voice.

State Street Market plans overhaul of its eateries as it cuts ties with Bon Appétit, triggering layoffs
By The Peninsula Foodist | 11 comments | 4,202 views

Doing more with the natural spaces we have
By Sherry Listgarten | 8 comments | 2,954 views

Can the Memphis police behavior ever happen here?
By Diana Diamond | 14 comments | 997 views