Off the Grid, an incredibly popular Bay Area food truck gathering, might set up shop in Menlo Park this year.

The organization has applied for a use permit to operate in the Caltrain parking lot at the corner of Merrill Street and Ravenswood Avenue.

If the permit's approved, about 10 food trucks would convene on Wednesday nights from 5 to 9 p.m. by the Caltrain station, with live music from 6 to 8 p.m. Food vendors rotate every week, bringing new faces and eats to the market, but no alcohol. 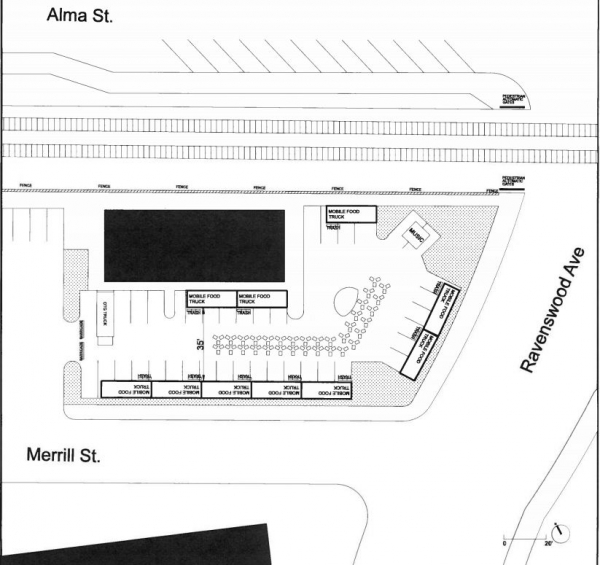 Off the Grid currently coordinates 25 weekly markets, from San Francisco and Berkeley to Hayward and San Mateo. Many operate in parking lots or city gathering places, but Off the Grid also has a partnership with Caltrain and runs markets at the Belmont and Burlingame stations.

"We were looking at other opportunities and Menlo Park became tangible because the location is highly under-utilized," said Ben Himlan, Off the Grid's director for business development, about the organization's decision to expand. "And we were interested in going further down the Peninsula."

Food trucks became a contentious topic in Menlo Park in 2012 when the City Council floated a proposal to bring them to the city's downtown area. The idea met strong opposition from local business owners and residents.

"As a restaurant owner on Santa Cruz Ave. for over 12 years, I have to voice my displeasure on the plan for food trucks to occupy an area near my restaurant," Ali Elsafy, owner of Bistro Vida, wrote in a letter to the Almanac in June 2012. "Has anyone looked into the mess that these trucks will create? Are there going to be public toilets available? Is there going to be someone cleaning up the overflowing garbage cans at the end of the evening? Will someone be cleaning the mess off the stained sidewalks, or is it just going to look disgraceful until the morning? Who is paying for this clean up?" he asked.

"Also think of the businesses, homes and apartments in the immediate area that have to suffer from hearing engines running for hours and general disturbance of their standard of living."

Another letter, written by resident Cherie Zaslawsky and titled "The horrors of paseos and food trucks," bemoaned that food trucks would spoil downtown, the "jewel" of the Menlo Park community.

Off the Grid mailed two notifications in late November and early December to those living in the area near the Caltrain station. The first was a letter of intent from the city and notification of a public hearing to take place at the Planning Commission's next meeting on Monday, Jan. 13.

"There was some opposition from that," Himlan said. "People (were) highly concerned about the music and noise from that."

He added that some residents also expressed concern about drug use and drinking, though the market will not serve alcohol.

"It really is about those food tucks," he said. "They are the star of the show. It's not about partying. It's activating a space that otherwise wouldn't be activated on Wednesday nights and actually might deter any drug use that might be going on there."

Himlan said that after receiving critical response from the first mail notification, Off the Grid sent out a second postcard with further details to clarify what the market and music would be like.

"People are assuming we are having a concert out there," he said. "That's really not what it's about."

Off the Grid's application, submitted in October, states that live music will be performed by typically one to two musicians playing mainly acoustic instruments for only a portion of the evening; the music will play via speakers facing the center of the market and with limited amplification. Any noise from food truck generators will be a "minimum." However, the application acknowledges that the noise may exceed ordinance limits.

The application also promises that Off the Grid staff will leave the market space "cleaner than (they) found it" and that vendors are required to provide garbage, recycling and compost cans in front of their vehicles. Setup would begin at 3:30 p.m. and cleanup would conclude around 10 p.m.

Off the Grid would also provide necessary lighting, and 200 chairs for customers.

The event would initially be approved for only one year "so that its operations can be evaluated prior to any long-term approval," according to the application.

"What we've learned from every location that we go to and every permit we go after is that the outreach portion is really important and the notification process is really important," Himlan
said. "We don't ever try to sneak these things in ? We're not looking to upset people; we're looking to build relationships."

This would be Off the Grid's first foray south of Belmont, joining a scattered few other food truck events in the area.

The Willows Market in Menlo Park hosts a smaller-scale food truck night every Monday; many of those vendors also participate in Off the Grid.

Popular food-truck event Edgewood Eats in Palo Alto was shut down in April after it was forced to leave Edgewood Plaza and unable to find a new home. Moveable Feast and Mobile Wednesday, two roaming food truck markets similar to Off the Grid, continue to operate in Palo Alto for weekday lunches.

In May Mountain View revamped its 57-year-old municipal code to allow food trucks in parts of downtown, but also added various permits and requirements.

The Menlo Park Planning Commission is scheduled to review Off the Grid's permit request at its Jan. 13 meeting, which starts at 7 p.m. in council chambers at the Civic Center at 701 Laurel St.