Los Altos standby The Boardwalk to close after 38 years

After 38 years of serving classic burgers, pizza and cold beers in a comfortably unpretentious setting, The Boardwalk in Los Altos is closing its doors.

Michele LaBarbera, daughter of original owners Bernie and Doris Tougas, said Monday that months-long negotiations with a new building owner over a lease extension failed, resulting in the decision to close.

"(The owner is) going to be pushing out and up and it just became prohibitive for us to try to stay," she said.

RKT Group LLC, with Vish Agarwal listed as the property owner, purchased the 4940 El Camino Real building in 2013 and in April of this year, won approval from the Los Altos City Council move forward with plans to redevelop the space, which The Boardwalk has occupied since 1975. According to the Los Altos Town Crier, the project includes plans to add 3,679 square feet and various updates for the decades-old mixed-use building. The additional space includes approximately 2,700 square feet of first- and second-floor office space and a 915-square-foot addition to the front of the building, which faces El Camino, according to the Crier.

Agarwal said Monday he is "not supposed to comment" on the project.

LaBarbera has been negotiating with the new ownership since December 2013 to extend her family's lease, which is up at the end of this month.

"We've been trying to work this through the last six to nine months and just weren't able to get it done," she said.

She doesn't want to cast a negative light on the new owner, who she acknowledged has full right to the building, and would not say how much rent she was being asked to pay to extend the lease. But, she said, times are changing in Los Altos.

"You know, Los Altos is a changing town and we're just so sorry that we're not able to be a part of it.

A post on The Boardwalk's Facebook page announcing the closure had garnered just under 100 comments by late Monday afternoon (it was posted Sunday, June 1). Comments range from "You will be missed," to "so many great memories there" (including somebody's first beer at age 21 30 years ago) to "Find a new location ? For many of us The Boardwalk was the last man standing?"

The Boardwalk's last day of business will be this Wednesday, June 4. LaBarbera said her mother will be there. Her father died nine years ago.

"There will be pizza and we'll open up the taps and say goodbye to The Boardwalk," LaBarbera said.

The family still owns and operates six Bay Area restaurants, including The Oasis in Menlo Park. LaBarbera said she'll be on the lookout for a new Los Altos location.

"We will greatly miss that community as well I think as they miss us," she said.

Check out the Mountain View Voice's review of The Boardwalk from August 2009, "We'll be havin' some fun." 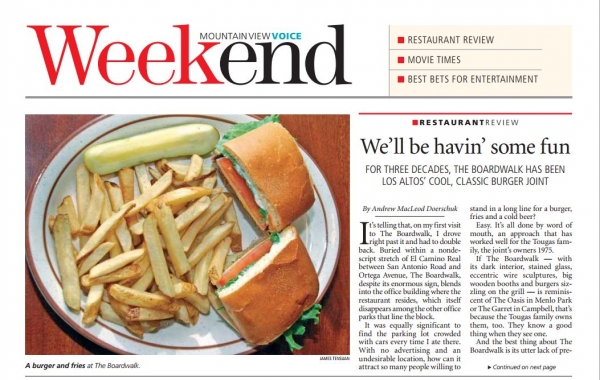