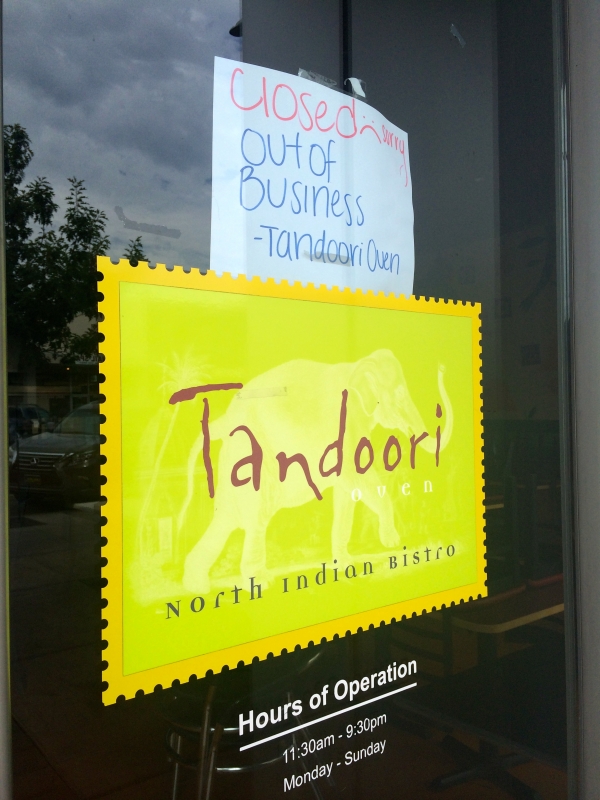 An employee from another Tandoori location ? there are six total, including Palo Alto ? who wants to remain anonymous said Wednesday that co-owner Mani Kabir sold his share of the business to his partner and began shutting the South Bay chain down. The employee also said that the Palo Alto lease ended and "the owner doesn't want to do a new lease."

Tandoori's location in Campbell has also closed and Los Gatos will shutter by November, the employee said. Remaining outposts in San Jose, Daly City and Santa Clara remain for now, but "the rest are also on the way, I guess," the employee said. He added that ownership told employees the restaurants were not doing well, but he said he hasn't seen a drop in business.

Kabir, who did not return requests for comment, opened at 365 California Ave. (between The Counter and Starbucks) in December 2008.

And the space has already been spoken for, with Pizza Studio, a fast-casual chain where you can create your own pizza (think Chipotle model), laying claim to the lease.

"We're hoping as soon as we're issued that building permit, we're going to be off and running and five or six weeks later we'll be open," he said. The chain opened this month a new location in the Village at San Antonio Center in Mountain View.

There's also a "starving artists" menu with five pre-built pizzas, all at $5.99 a pop.

Pizza Studio ovens bake from both the top and the bottom very quickly at 600 degrees, meaning the personal pizzas are ready within two minutes, Burrill said.

"They're much easier for us to install," he added (hence the fix-to-six-week timeline). "We think that these provide us not only speed but consistency in baking. It'll come out equally baked, top to bottom, and just perfect every time."

And because Pizza Studio does, in fact, emulate an art studio, every outpost provides wall space for local artists to display and sell their work, commission-free.