Have you ever bought fish off Pillar Point Harbor in Half Moon Bay? I wanted to learn more about it after hearing marine biologist Nicole David discuss how to improve the process. David is on the ballot for Harbor Commissioner, Nov 4th.

Established in 1933, the Harbor District of San Mateo County operates two facilities, Pillar Point Harbor at Half Moon Bay in Princeton, and Oyster Point Marina/Park in the City of South San Francisco. Pillar Point is a 369 berth working fishing harbor; Oyster Point is a 600 berth recreational boating marina. The District is governed by a five member Board of Harbor Commissioners, who are elected county-wide for staggered four-year terms.

I knew we could buy off the docks, but not much else, including that San Mateo county property taxes fund half of the $10 million used to run both harbors, and the District seems to not handle our money very well, running a chronic budget deficit. It's time to start paying more attention I guess.

"I'm committed to a fiscally well managed harbor, and want to take better care of this amazing local resource," says David. "There are so many health advantages to buying fish straight from the ocean. Since it's not farmed, there are no antibiotics or artificial colorings added to the flesh."

David says 90% of the seafood eaten in the US is imported, and that we ship most of what U.S. fisherman catch to other countries. "There is a big disconnect. Let's build the local market. Pillar Point fisherman pay the highest fees for offloading fish on the west coast, causing boats to go to San Francisco or Monterey. San Mateo County is losing revenue and a terrific local business."

John Draper, Assistant Harbormaster at Pillar Point says depending on the season and where the fish are, 50-200 commercial vessels operate out of the harbor, and on average, fish are caught 1-20 miles off the coast.

"Sales continue to grow," says Draper. "On the day they sell, fisherman mark the harbor notice board with name and location of their vessel, and what fish they have, then we update the Fish Phone. For the most up to date info, call that number or check the new Fish App."

No better time to head out to the coast than right now. The weather has been primo, everyone is decorated for Halloween, the waves have been great, and the water is the warmest all year. You don't even need a wetsuit (Half Moon Bay water has been around 66.7° for the last two weeks.) So pick up your pumpkins, hit the beach just past Sam's Chowder house, then drive a ½ mile to Pillar Point and pick up your fish. Consider Happy Hour then at Old Princeton Landing - the 5PM sun comes right onto the patio this time of year!

You have to buy a whole fish off the boats, but you can't beat the price. So on pick up day, plan to host a big Food Party! (don't forget to invite me), or just freeze what you don't eat. Two weeks ago a gutted 13# salmon sold for $10.99 a pound (compared to Whole Foods wild caught for $21). After you buy, walk a few feet to Princeton Seafood Company and pay just $6 to get your delicious fishy sliced into steaks or filets. 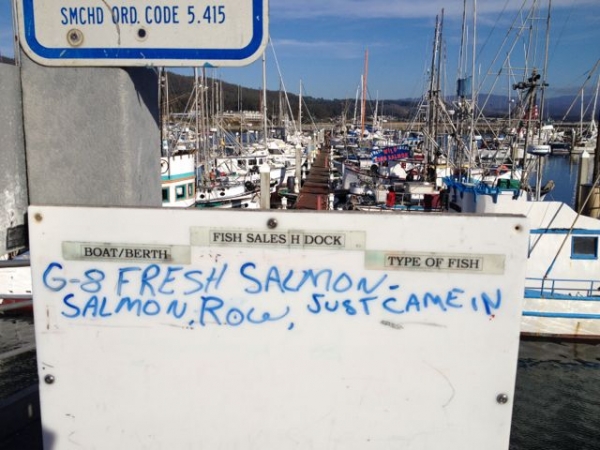 And don't forget - all comments entered to win a trip to the Fancy Food Show. Eat your way thru this culinary extravaganza and get interviewed on your favorite new trends. Winner announced Nov 27th.