﻿ Where DO The Elite Meet? | The Food Party! | Laura Stec | Almanac Online |
Include Photos | Include Comments | Print this page | Close Window

Where DO The Elite Meet?

Have you ever been there?

You might have driven by for years and never noticed. Or you could be like a guy Chris Gillman describes during his 37 years as owner. "He peered in the front door at least four times before finding the guts to walk in." It's understandable ? the windows are small out front, and there's not a ton of light, well, that is except for the Saddle Room sign which proudly beems out to Woodside and Belmont roads. 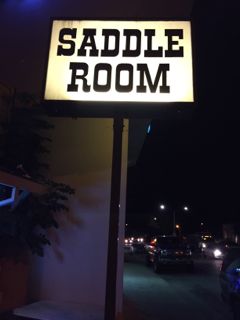 "That sign has history," Gillman says as he recounts a certain Oct 17. It's Giants v. A's, game #3 of the 1989 World Series, when the first pitch got derailed by an even bigger event - the Loma Prieta earthquake. "I was one of the few people who got out right after it hit. I was standing near an entrance to Candlestick, so I could race out before they locked it down. When I got back, Woodside Road was in complete blackout, except the Saddle Room sign. It was a beacon in the night," Chris reminisces and smiles. "Roddy Terwilliger (from Portola Valley) brought by his generator. Everything was closed, but the bar was packed. People came by all night for light, radio updates (TV wasn't available), a drink and some community."

But that's the way it always rides at the Saddle Room, a place where clichés run true. When you're there ? you are family. And yes, everybody knows your name. Yeh, it's a dive bar, whatever that means, but we chatted about this before - some of the friendliest, coziest places to hang out are dive bars.

"I'm really proud of Friends of Kids, our annual golf tournament that raises funds for local children's projects since 1998. We sponsored the Special Ed Ball for years. It was great watching kids dance in tuxedos, gowns, and their wheelchairs."

1607 Woodside Rd has had a bar in it since the 1950's (then The Green Frog). What it was before that remains a deep mystery Chris hopes to solve one day. "The State Board of Equalization wasn't founded until 1951, so I have no idea what this building was before that. If I could only find an old phone book or something. Even the Redwood City Library doesn't have any records. I've been searching for the answer for years."

If you happen to know the answer, and even if you don't, I hope you stop by soon. Maybe for Monday Night Football when regulars volunteer cook a great meal for patrons. The night I was there, Redwood City's double trouble residents Jim Meisenbach and Jose Olvera (with behind scene support by Diane Olvera) made Perfectly Grilled Pork Loin with Diane's Secret Rub, Pasta Rustica, Caesar Salad and Ciabatta Garlic Bread. Price? $5 ? delicious and the best deal in town. 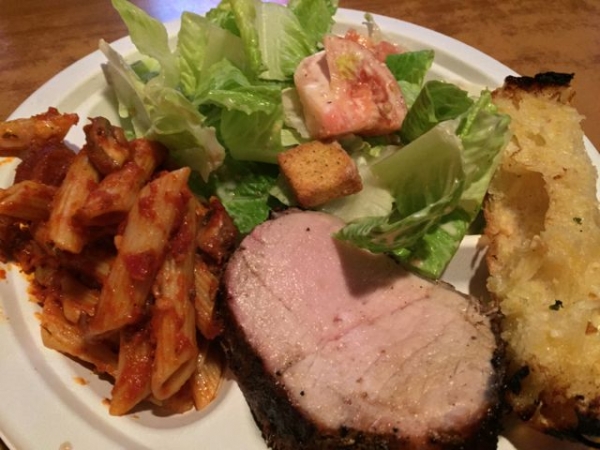 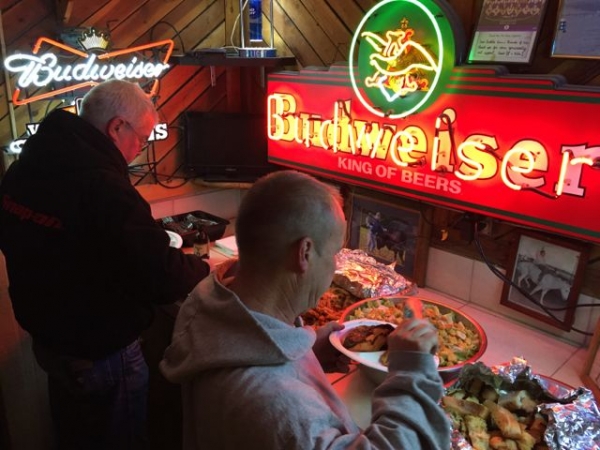 Dinner is open to all and you'll be surrounded by an interesting mix of folks, including an all women's fantasy football league; Fifty Shades of Fantasy, gals from Woodside and surrounding towns.

"We've been coming on Mondays for 2 years," says Heidi Schley, one of the players. "They always save us the table near the big screen. It's hard to find this anymore, a place where everyone is super friendly and knows you. It?s been a gift to be a part of the culture of the Saddle Room. It?s a special place."

So stop by, the next time you drive by, the Room, as the Elite call it. Chris just put up the ornaments, festive creations loving patrons have handmade over the last 16 years. Each ornament has a story, and Chris can recount most of them. New ornaments compete during the annual Holiday Party, on Saturday, December 20 from 3 PM ? 7 PM. 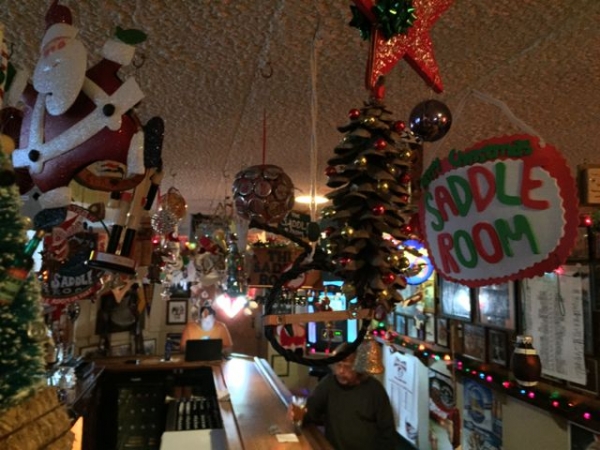 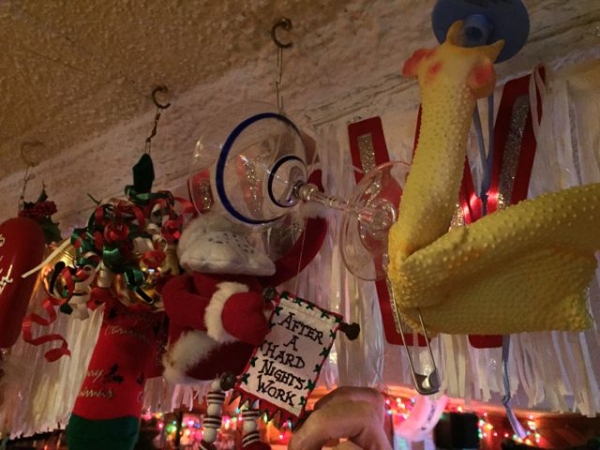 If we don't know your name when you get here, we will by the time you leave. ☺ 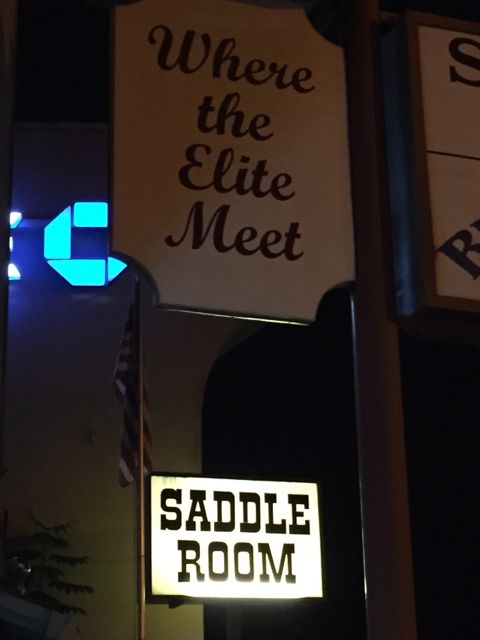 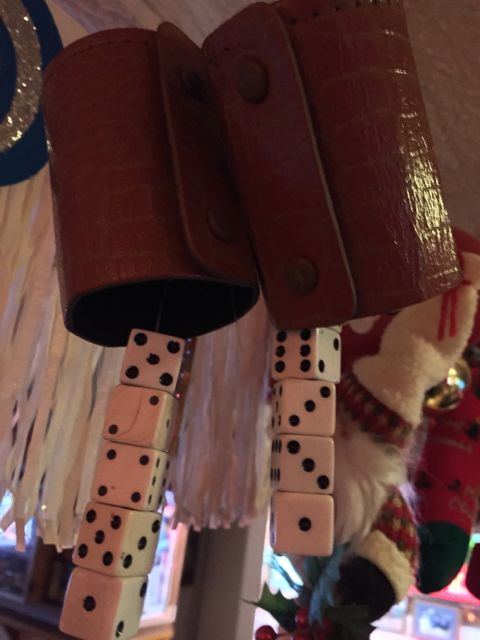 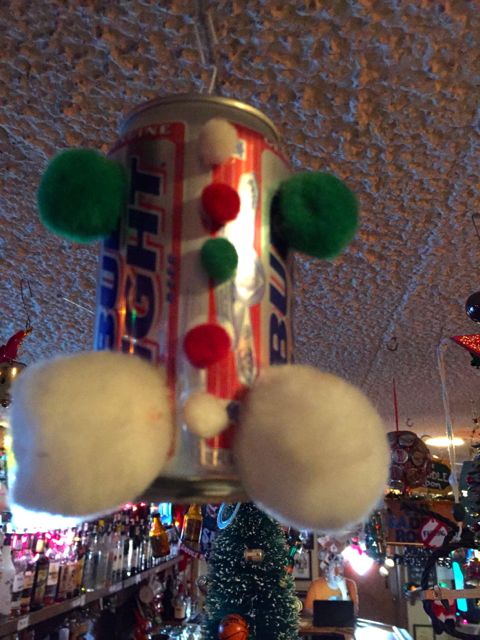 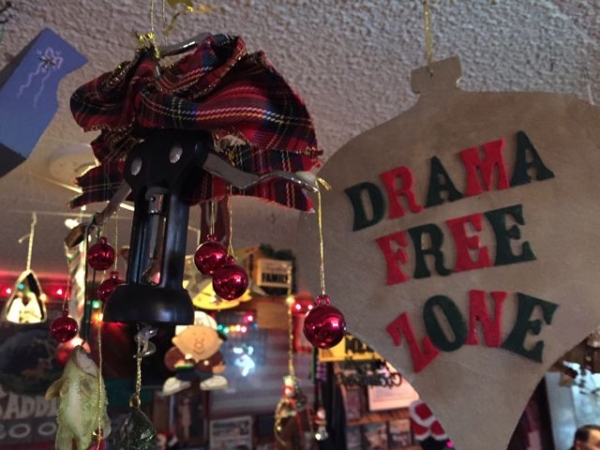 Trivia question for extra points: What alcohol is the #1 seller at the Room?