"I was working a lot of long hours and (the cafe) probably wasn't as busy as I was hoping it would be," Adams said Monday. "But we had good business; we had great employees and all the customers. I think I was just spending too much time here.

"It appears to be time to move on," he said. 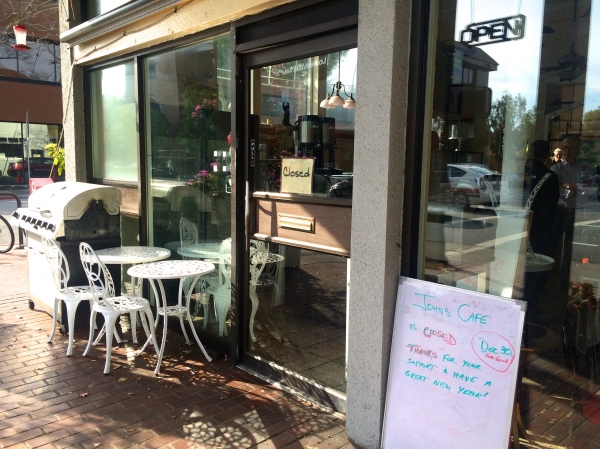 A sign outside John's Cafe reads, "John's Cafe is closed (Dec. 30 for good). Thanks for your support and have a great new year!"

Adams opened the cafe at 401 Lytton Ave. in 2011 after a career in high-tech. Adams ran his own market-research company for more than 20 years, worked for Yahoo and Nielsen and was consulting when he decided to open a café.

"I was walking across the street from Mollie Stone's and there was a 'for lease' sign on a restaurant that was there and a little light bulb turned on," Adams remembered. He said to himself, "'Hey, maybe I'll do that.'"

He said he wanted it to be an "all-around cafe," though they specialized in freshly made paninis. All meats were made in house ? the ham baked, the turkey slow-roasted for hours and the chicken and tri-tip made on a grill that sat outside the front of the cafe. The café also served coffee, soups, salads, breakfast items and baked goods. Adams also added "John's Cafe At Night" with wine tastings, games and specialty dinner items.

Adams said one of the most surprising yet gratifying things about opening the café was that it became a place that customers were attached to.

"You think you're opening up your cafe and what you realize quickly is that the people who come in take it over and it's their cafe. If you change something on the menu, it's like, 'You changed my menu!'" he laughed. "That's probably one of the gratifying or just really interesting things that happens. You think you own it and it turns out that it becomes, without you knowing it, community property."

Adams said he's "pretty sure" the person who took over his lease will be opening a restaurant, though he doesn't know what kind.

Short term, he said he'll probably get back into market research or consulting, though he's not ruling out another cafe.

"If I have another cafe I will probably try to have it on a beach somewhere," he laughed.