HSR or BART? The Survey Results

My previous post discussed the possibility of extending BART down the Peninsula and, how I thought that would have a more dramatic, positive impact on Peninsula businesses and residents that the High Speed Rail (HSR) non-project. It gives a path to ameliorate impacts of new offices and the consequent housing inflation. I included a brief survey to try out SurveyMonkey to add this type of feedback to my post -- as an experiment.

The results suggest that, indeed, a BART option is much more popular than HSR. The survey provides two forms of feedback: the numeric tally in graph form, and free form comments from respondents. The latter comments critique the questions (acknowledged). Just to flagellate myself: The â€˜either/orâ€™ questions should not have been â€˜either/or/but what ifâ€™? I also assumed knowledge of the history and options by the reader. Iâ€™ll try better next time.

Question 1: What Rail Model would be most effective for the Bay Area? 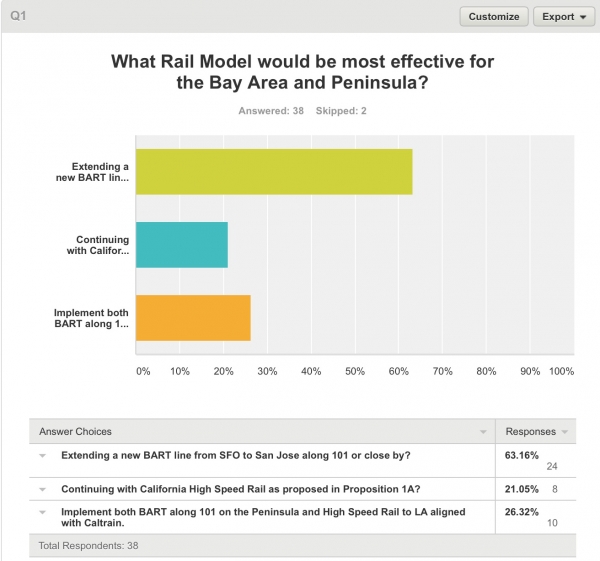 Question 2: Should Proposition 1A Funds be directed to a BART solution instead of HSR? 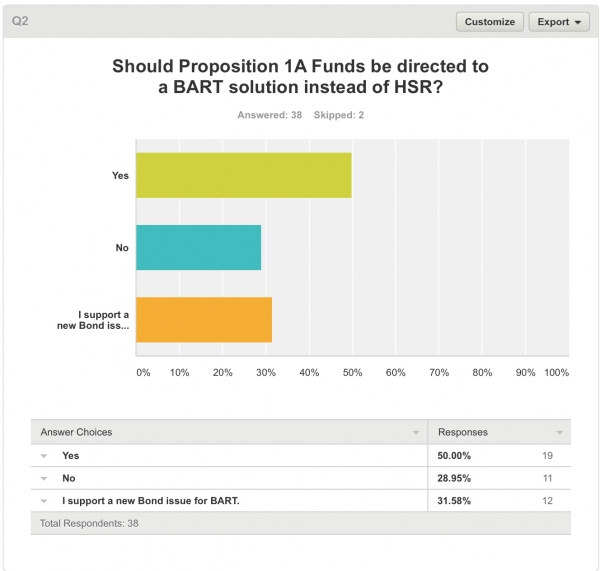 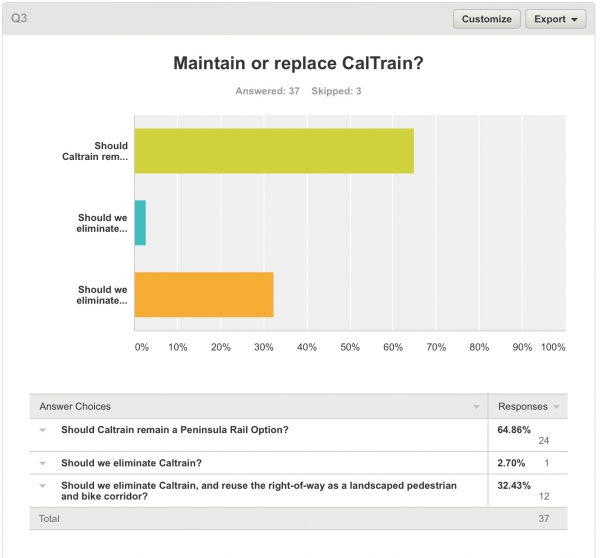 Here are the individual comments from respondents:

'HSR is going to be remembered in the history books as one of the greatest boondoggles ever concocted. What a waste.'

'The first priority should be a regional (Bay Area) - BART and Caltrain. Investing in HSR is a waste of money. As so many have already said, it would solve a problem that already has viable cost-effective solutions AND it would create a single point-of-failure (SPOF) that could be easily crippled by natural disasters or a terrorist.'

'HSR will provide no commuter benefit to peninsula residents and is not economically viable. If built, however, it would be a disaster to run it through the densely populated peninsula cities. Think the old elevated SF Embarcadero Freeway - that's essentially what the HSR Authority proposes.'

'With the upgrades that will come with HSR, Caltrain can provide BART-level service at a fraction of the cost of building entirely new rails. It will be extended to downtown SF and have faster and more frequent service. Caltrain has the legal option to kick freight service off the rails if necessary. There is no reason to spend billions on new rails when BART-type service can be provided on the existing ones.'

'Cal Train is a subsidy for spoiled techies who work in Silicon Valley but choose to live in SF because they find the Valley too boring.'

'BART makes sense along El Camino, especially where it diverges from the Caltrain line.'

'HSR is a boondoggle! All money should be directed AWAY from HSR and to local transportation options'

'I think you ned redundancy in public transit - sounds crazy, but reliance on a single system seems fraught with the possibilities of monopolistic business practices, plus leaves no options for the inevitable breakdowns, slowdowns and shutdowns that occur with public transit regularly. Hence, I'm all for BART and Caltrain!'

'High Speed Rail is a taxpayer boondoggle. Better to implement an automated car or limo service down the median of I-5. Technology has passed high speed rail by the way side.'

'Caltrain should be a 4-track grade-separated system. BART is a non-standard nightmare and should only be extended if it's converted to standard gauge rail that can use off-the-shelf equipment.'

'Thanks for putting this survey out. We need to use and maintain the systems we have now instead of dreaming in future prefect tense, or as some have said, it is hard to drain the swamp when you are up to your a**s in alligators.'

'We had an opportunity for BART in the '70s. That time has now passed. If you think HSR is expensive using existing ROW, check the price of BART extensions.'

'These false choices are both odd and sad. Are you seriously proposing removal of one of our few existing mass transit options?'

'Get people out of cars. They're dangerous to everyone, cause great stress, and rob us of useful time. Look to Europe and Japan for better models: Multiple rail options.'

'The train should go to San Jose for High Speed but not beyond there up the Peninsula.'

'NO HSR. BART circles the Bay. BART under the Caltrain corridor.'