﻿ To Rome with Love | The Food Party! | Laura Stec | Almanac Online |
Include Photos | Include Comments | Print this page | Close Window

To Rome with Love

I returned to Rome to find out if there was something more to this relationship, or if it was all just a passing fancy.

"Why, my relationship with Rome of course. My Rome-mance!"

Ahhh Roma, artists and poets have drawn to you for millennia. Si, you are crowded. Si, you are dirty. You look your age. But with age comes depth and inner beauty. And I have more patience now with imperfection. I too have put on some years.

Alora, I've tasted Rome before, but had to see her again. Like an unexpected love that gets under your skin, I couldn’t stop thinking about her, and had to know why. Nestled among the congestion, litter, selfie sticks, and plastic face blobs that flatten and squeak, was a real love there for me to embrace?

Day One
We reunited at the Vatican for the Wednesday, 10 AM general audience with the Pope. Get there early (8AM) for the best seats, and try to grab one near the barriers because the Pope still runs around St. Peter’s Square in that fun, little Pope mobile. The website says something about free tickets, but I forgot to get one. Didn't need it - just wait in line and walk in with the other 100,000 people in attendance. Fabulous! 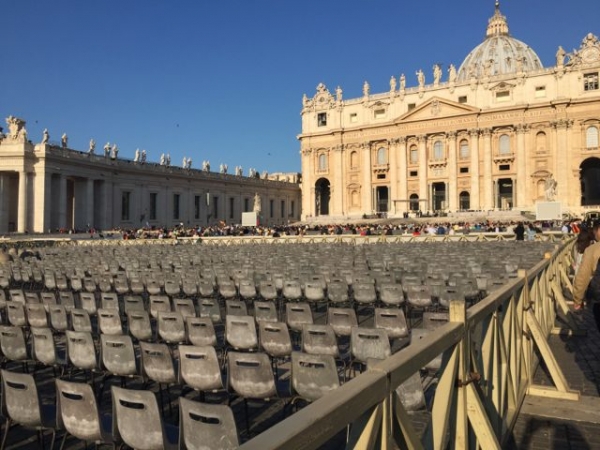 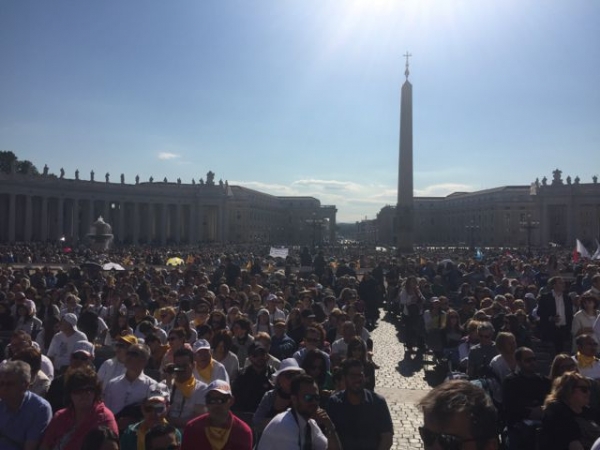 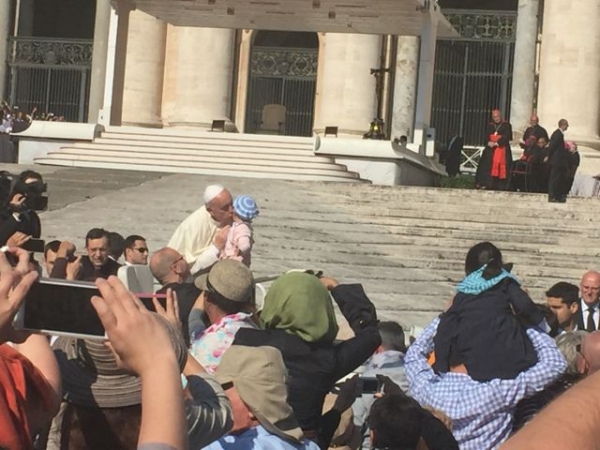 Then off to Centro Storico (old town) with The Red Bicycle, to pedal an easy, three hour route along cobble stone streets past Spanish Steps, the Colosseo, Parthenon, Jewish Ghetto, and secret alleyways with Glenn, our guide ($35 E). Bicycling is a perfect way to explore Rome; I'm surprised more visitors don't take to two wheels. If more bikes were about though, gotta do something about traffic flow. Glenn had guts, let's just put it that way, and we were just a party of three. Imagine the posse of twelve that biked past us and hundreds of pedestrians? Too many wheels, legs, and ruins on medieval streets without some guidance. 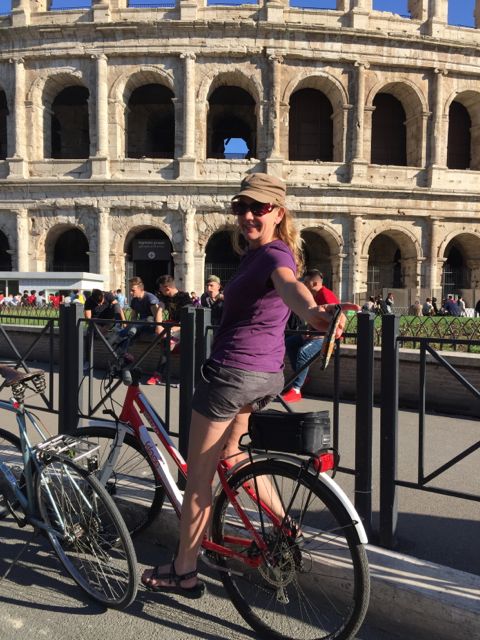 "Rome is a story of water," Glenn shared, speaking with the confidence of elder and sage. “From the aqueducts of ancient Rome to today’s drinking fountains, the need for fresh water has always been met. Well, almost. After the fall of the western Roman empire and degrade of the city (4th century) the aqueducts fell into disrepair. By the end of the 1st millennium only a few thousand inhabitants were left along the riverbanks. It was the Renaissance (14th century) that brought new life and a new aqueduct to Rome, the Aqueduct Felice or ‘happy waters,’ (1586). Combined with the Virgin aqueduct (the only one to survive centuries of decay) they brought life back to Rome and her piazzas. Then, the Trevi fountain was built in the same place (1762), where the Virgin Aqueduct gave water for over 17 centuries. Commissioned by Pope Clement XII, it was sculpted by Nicola Salvi, from an existing design by Gian Lorenzo Bernini, 100 years before. Finally Rome had her fountain praising water for bringing life back!” 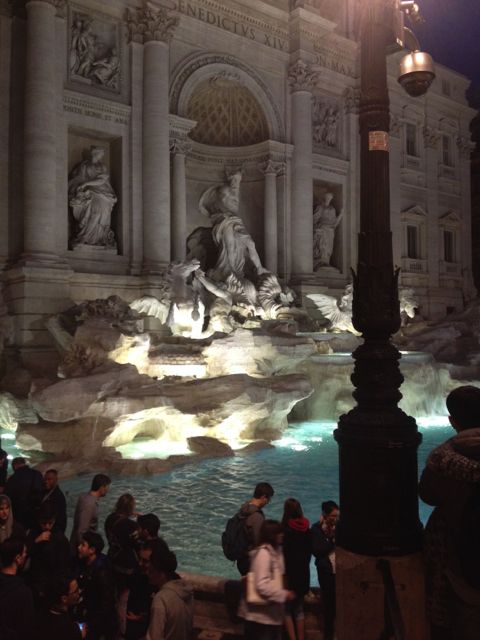 On Day Two, we doubled-dated with Food Tours of Rome, and walked hand-in-hand through the Jewish Ghetto, feasting for three and a half hours with host and cute Italian guy, Cosimo. I didn't spent much time in the area last time, and glad I did this time. A lot of locals never left, so it seems more authentic Rome, right in the middle of the action. We enjoyed seven classic eateries including: 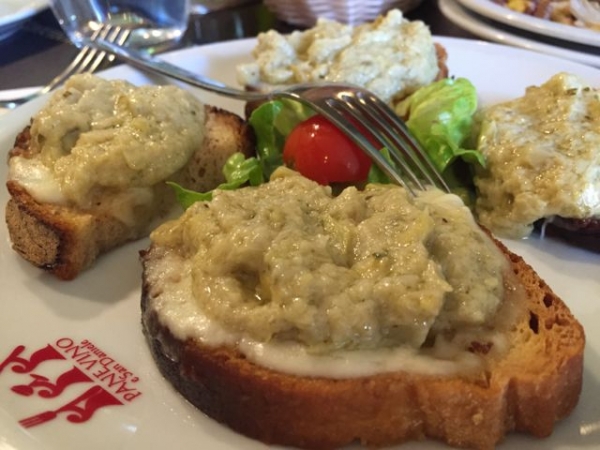 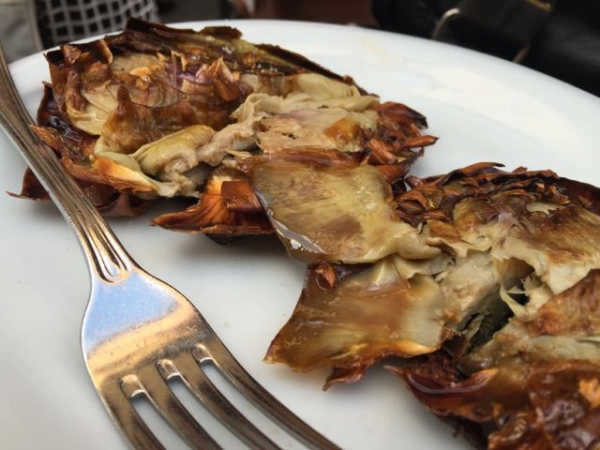 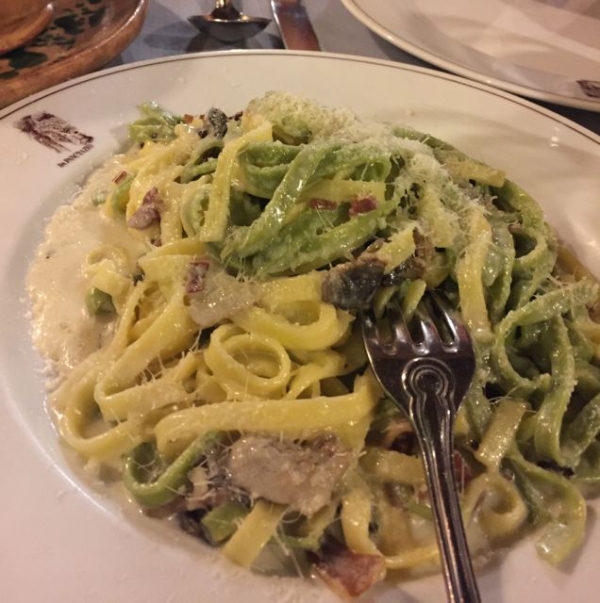 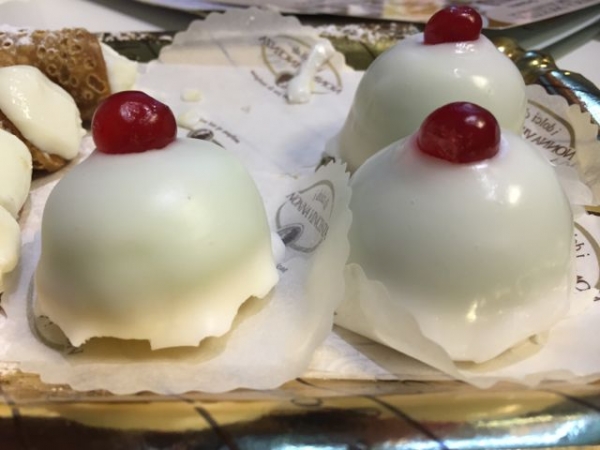 and Sant’ Eustachio for a caffé selection I had never seen before. 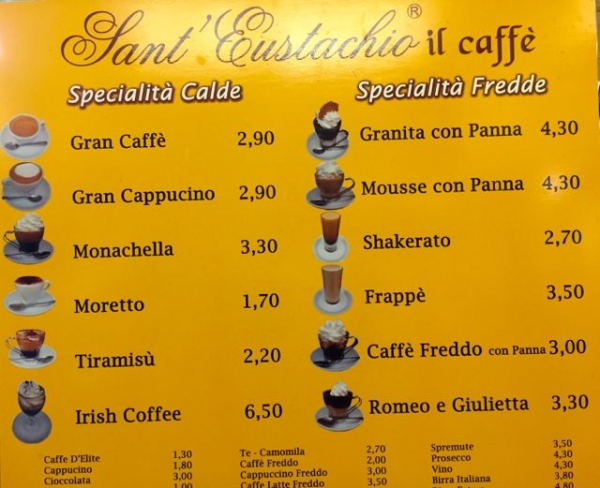 Plus a stop where Julius Caesar was killed, now a home for stray cats. 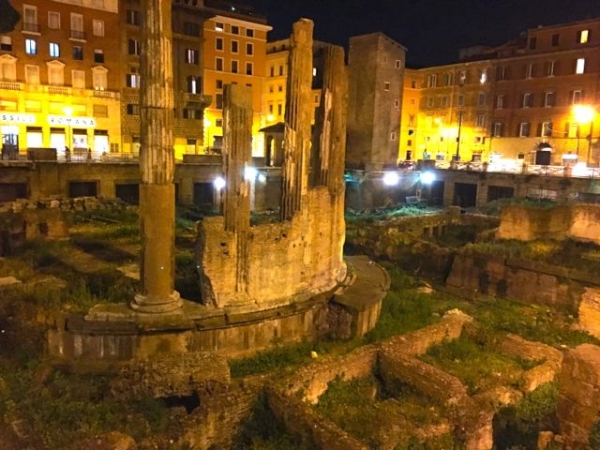 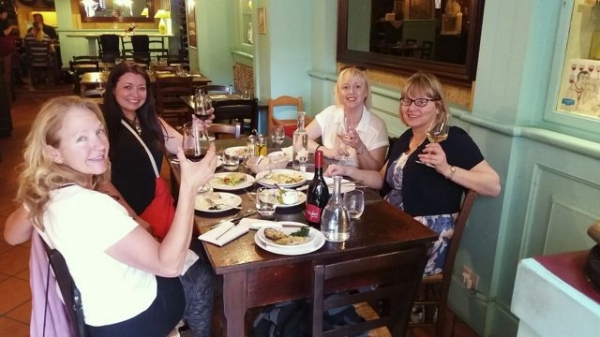 Day Three
San Lorenzo was the destination, an edgy, seedy part of Rome. I love Rome’s wild, creative side, and went in search of a favorite leather shop which was gone. But tattooed streets and the smell of marijuana,? Still there - on the walls, in the air. La Terverna di S. Lorenzo bartender sang St. Peppers Lonely Heart Club Band while we reminisced old times over a vino bianco de la casa. It's an interesting area to visit because few tourists do. More places are open at night, but if you go then, remember it's San Lorenzo. Walk with purpose. 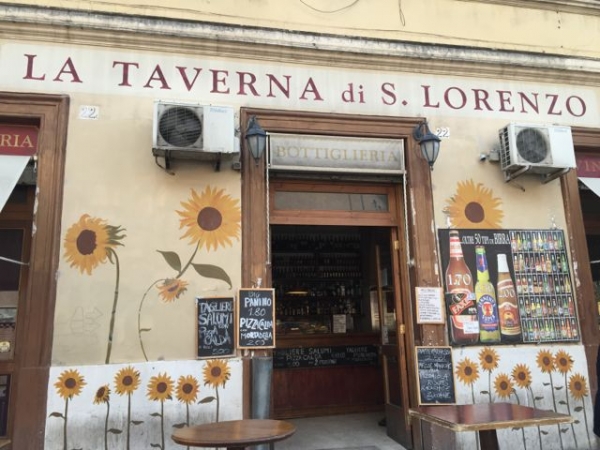 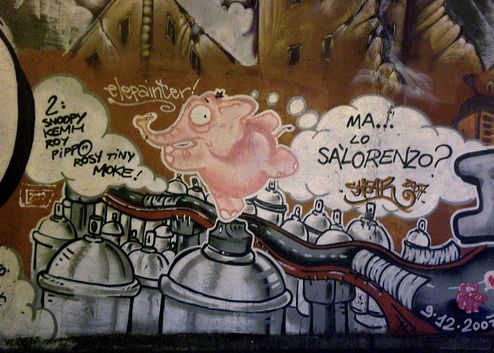 In the evening, we shared happy hour at the Vatican (yes, they served wine, but only one glass because "it is a holy place"), followed by a night tour of the museum. If you visit from May-September when Friday evening tours are offered, check it out. The courtyard venue perfetto, buffet well worth $15 E, crowds smaller, and viewing the collection in the light of night is magico. 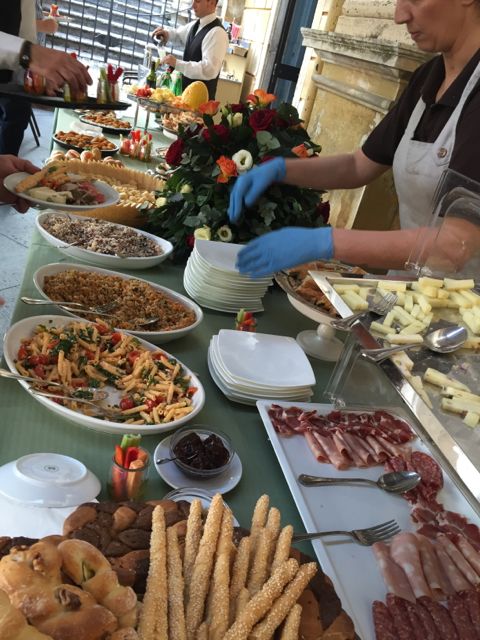 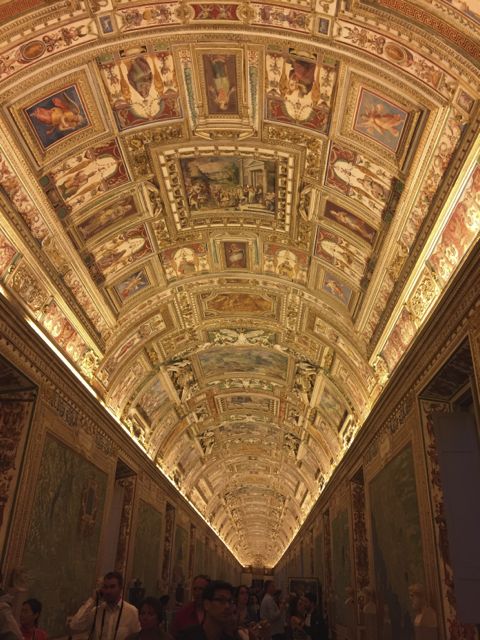 On Day Four, I best kept the words of Venetian novelist, Tiiziano Scarpa, in my back pocket, along with my cell phone. Getting lost is the only place worth going. This trip, like last year in China, really depended on, and was enhanced by, the map app (and Google Translate). I hate giving more money to Verizon, so limit data by downloading directions over free wifi, and follow the highlighted route in free airplane mode with GPS. Another option is buy a SIM card from a local phone store, but I heard this only be done with a "broken phone," so Apple products don't work? Can anyone clarify this?

Getting back to lost, frustrated by my competition...Roma has many suitors....and also my inability to find any Made in Italy special things, I traveled as far away as I could to the last Metro stop and Europa2, where the "Italians shop." Feeling all confident and local because I'd been there a couple days, I hop the 705 off the Metro, instead of recommended 709, because a sign said 705 stopped at Europa2 too. HAH! Traveler Rule #1 - listen to ticket seller.

Hey, Mr Bus Driver, there's Europa2, coming up on the right, and, and, hey there it is, and, no no, wait, there it goessss. And oh god, you're getting on the freeway out of town? Dios mio!

Lucky me, a couple exits later we get stopped by an accident, Dios vi benedica, and I jump bus to start the three-mile walk back through, well, I didn't really know. Hungry, tired and frustrated because I'd rather be buying all those special Italian things than walking along roads with no sidewalk, I take refuge part way in the only Osteria around, McDonald's. I order a Caesar Salad that comes with what I thought was a digestive, but was actually an itsy-bitsy bottle of olive oil as the only dressing. 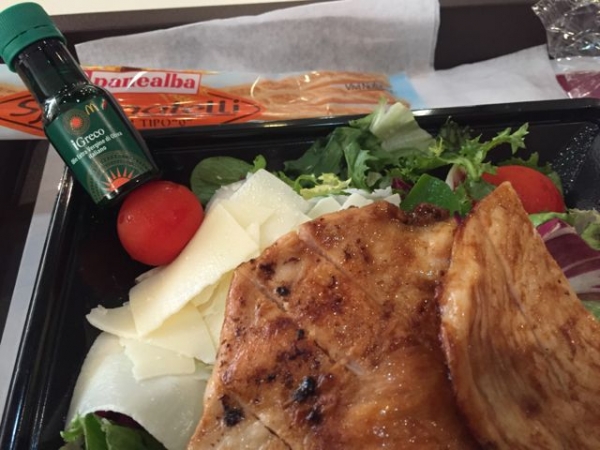 I eek out a couple tablespoons at most, and think to myself, now this is one of your imperfections Roma - your salads, and actually, now that I'm being honest, your vegetables in general are not what I expect out of a relationship as intimate as ours. I need more from you than eggplant, zucchini, roasted peppers and plain romaine. Interesting stop though, just to see the recycling system - better than ours. 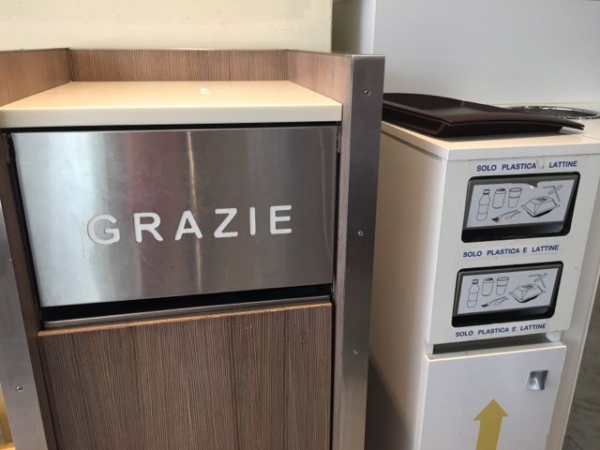 While leaving my love that afternoon, I also realized language skills might keep our tête-à-tête from progressing. Italians not only want you to try and speak Italian, they want you to be good at it. The order-taker at McDonald's kept asking me something and getting increasingly frustrated when my response remained "Caesar solamente, gratzie, Caesar." It was probably only "Fries or a drink?," but too noisy to ask her to speak into Google Translate, so I never understood exactly. With a huff, she tosses me the Caesar. I sit quietly chewing naked lettuce, feeling alone, and wondering, maybe it is time to break up?

But wanderlust taught me on Day Five to not give up so easily on love. I returned to Centro Storico to bask in angels, gods, marble and domes that tower above and fill me with awe and inspiration. I realized that last day that I, too, still had a lot of Eternal City left inside. Hanging around the Colosseo for hours doesn’t make me just a tourist. Everyone parties in the center of Rome, even the Romans, and the international festival that happens day and night around some of the oldest remnants of humankind is not easily forgotten. 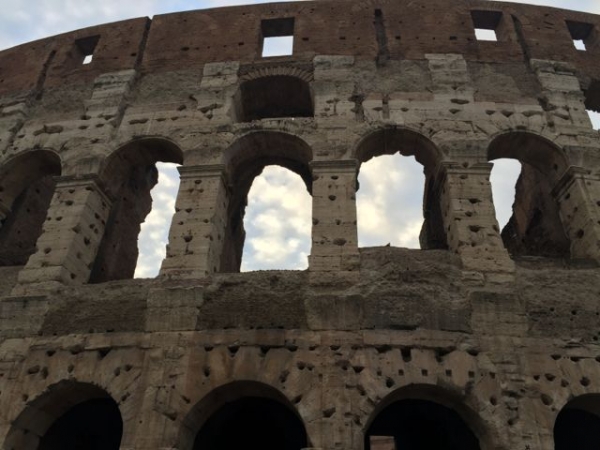 Yes Rome, I still love you - cracks, crowds, and all.

Parting is such sweet sorrow, so mi amore, might we stay in touch? I tossed a coin in Trevi. Maybe we will meet again?

Until then, I dream of you. 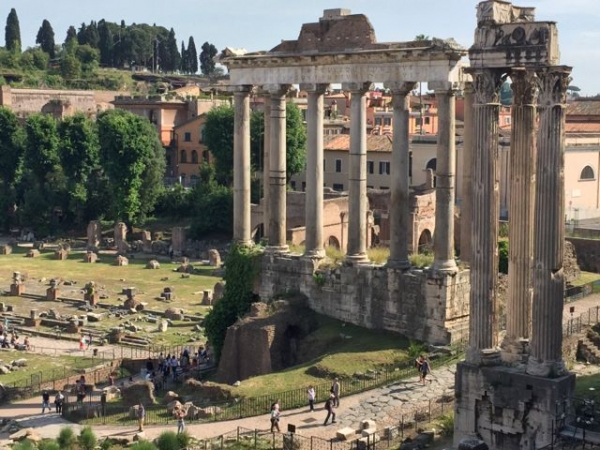