Paris Baguette has taken over the space at 317 Castro St., the former longtime home of used bookstore BookBuyers.

The Mountain View bakery will be similar to most others in the area, including downtown Palo Alto and a new location San Jose, though the company plans to incorporate "minor nuances that would tie us a little bit closer to the community," Sidoti said.

"It'll be a showstopper because we want to make a big impression in Mountain View," he said. "It's a very important area." 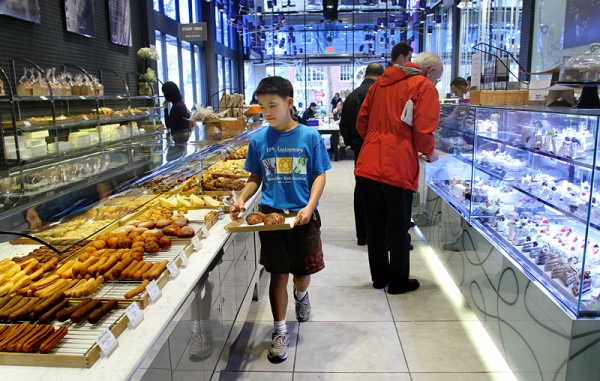 Paris Baguette opened a bakery, above, in downtown Palo Alto in 2011. Photo by Veronica Weber.

Paris Baguette, which was started in the late 1980s by a Korean pastry chef trained in France, is in the middle of a massive expansion effort. The company is aiming to open 350 stores by the end of 2020, Sidoti said. There are currently 50 locations across the U.S. as well as thousands worldwide, including franchises.

The company hasn't yet set an opening date for Mountain View, but Sidoti said they're aiming for sometime in the spring.

When asked if the chain is planning to open more local outposts, Sidoti wouldn't divulge details, but said they're in the works. "Target expansion markets" identified in a press release from the company in March include Los Altos, Menlo Park and Redwood City, among others.

"We've got some things on the books that we're in negotiations for that I can't disclose until they’re signed but yes, we do have additional plans for the South Bay," Sidoti said. "They've been very good to us. It's a great market."

Read this review of the Palo Alto Paris Baguette, which opened on University Avenue in 2011: Baking buzz