The metal bones of a restaurant are emerging inside 250 California Ave. in Palo Alto.

"Nearly a year after filing for our building permits, Protégé is officially under construction!" the co-owners wrote in an update to email subscribers on Thursday. "It’s been a long and bumpy road, but we are eager to put our delays behind us and focus on the future as we build our restaurant."

The project secured City Council approval earlier this summer after the restaurateurs nearly pulled out due to increasing frustration with a delayed permitting process, the building owner said in June. Kelly and Secviar had originally hoped to open in late 2016.

With that process in the rearview, a team of Bay Area design, construction and branding companies "have been working hard to mold our vision into a unique, neighborhood-friendly space," Kelly and Secviar wrote. 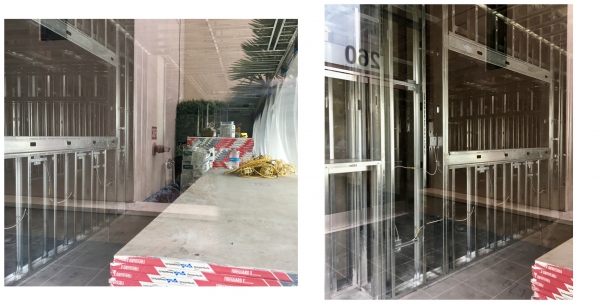 A peek inside the 250 California Ave. space (excuse the reflections). Photo by Elena Kadvany.

Protégé will also feature several Bay Area artists, the co-owners wrote in their email, including knot-driven art by Windy Chien of San Francisco and dinnerware made with California clay by Jered Nelson. (Nelson's resume includes work with Bay Area restaurants like Chez Panisse and Coi and chefs like Daniel Patterson and Michael Mina.)

The restaurant comes with strong credentials. Kelly is a master sommelier who worked at the renowned French Laundry in Yountville for a decade and in 2012, was one of only four people to be granted a master sommelier diploma from the Court of Master Sommeliers.

Secviar was sous chef at The French Laundry from 2005 to 2011, when he left to become chef de cuisine at Addison, a San Diego fine-dining restaurant. Secviar's resume also includes stages at several Michelin-starred restaurants in Spain, including El Bulli, Akelarre and Kokotxa.

At an Architectural Review Board meeting in June, Secviar said that "it is our dream to have a world-class restaurant here in the heart of Silicon Valley, to train employees in the culinary arts, to employ people and to serve our community."

On Thursday, Kelly and Secviar wrote that they have "learned from our mistake(s) of trying to forecast an opening date" and are now "crossing our fingers for a late 2017 opening."