Why we are Warming

We ended the last blog post with about half the Sun’s energy hitting the Earth. The question for this post is: what happens to it? 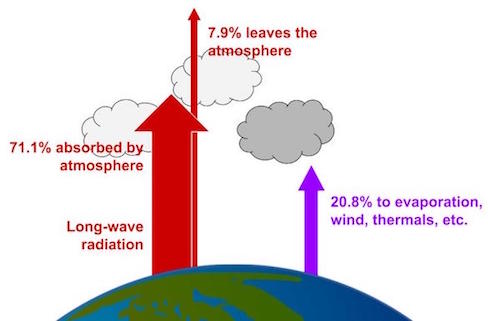 Not surprisingly, the Earth warms up and radiates heat and energy. But little of the Earth’s energy goes straight to outer space. Instead, it gets tangled up in the atmosphere. That is different from the Sun’s energy, all of which passes through except for the highest energy UV rays. (1) What is going on? Why does radiation from the Sun get through the atmosphere, while radiation from the Earth gets trapped? Since this is the basis for the greenhouse effect, it’s good to understand this. 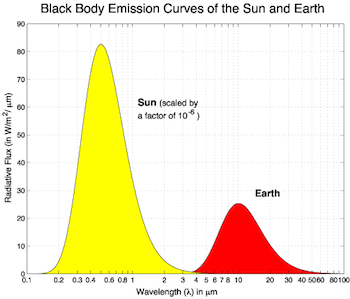 From a Columbia University course on climate

The atmosphere absorbs only the high-energy UVC and UVB rays from the Sun. The other solar radiation goes right through. In contrast, many molecules in the atmosphere interact with the lower-energy infrared radiation from Earth. These are called “greenhouse gas” molecules because they effectively trap the Earth’s heat, much like a greenhouse would do. Shown on the right below, they have some asymmetry or electric polarity that the radiation can interact with, causing the molecule to vibrate between two or more states. 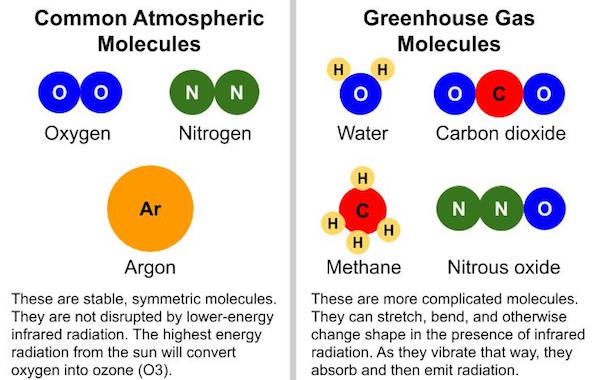 Here is what that vibration can look like for carbon dioxide (top) and water (below). 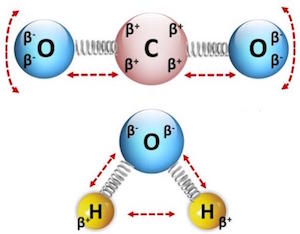 With most greenhouse gas molecules able to absorb several different infrared wavelengths, you get a pretty “opaque” atmosphere when it comes to Earth’s radiation -- little passes through. Only energy emitted in a small range of wavelengths, between about 8-12 micrometers, makes it through easily. That is called the “atmospheric window”, and it is the main way that heat from Earth bypasses our atmosphere.

In the diagram below, in the bottom rows, you can see which gases absorb at which wavelengths. Oxygen and ozone absorb the shortest, high-energy UV rays, while water vapor traps much of the lower energy radiation. Carbon dioxide is effective because it blocks where water vapor does not, and in particular at a wavelength that the Earth emits a lot of (around 15 micrometers). (3) The net impact of all of this is shown in the top row. The sun’s radiation, shown in red, largely comes through the atmosphere except for the higher wavelengths (on the left). But most of the Earth’s radiation is absorbed, with a small window around 10 micrometers. 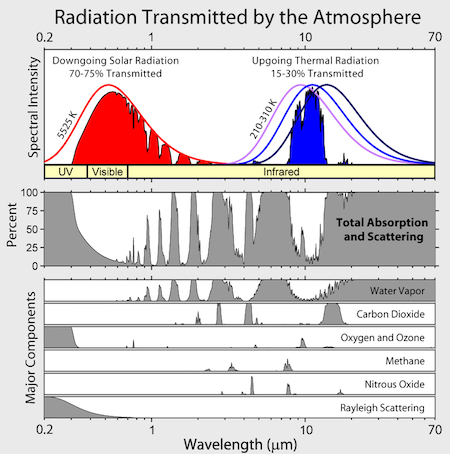 With much of the Earth’s radiation, and some of the Sun’s, getting absorbed by the atmosphere, you may wonder where it ultimately goes… 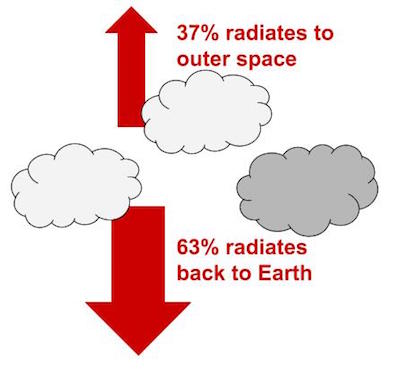 Some of it escapes, but more of it goes back down to Earth, to be recycled yet again. This energy blanket has kept the Earth a stable, moderate temperature -- if there were no greenhouse effect, our average temperature would be about 0F instead of 60F. But in the last 100 years or so, and especially in the last 40, we have altered the atmosphere and our environment is warming.

You have seen three “Where does the energy go?” pictures in these two blog posts, one for the Sun, one for the Earth, and the last for the atmosphere:

They show energy moving between the three environments. When you put them all together, you get what is called the “Energy Budget” for our ecosystem. This helps assess whether our energy system is in a steady state. 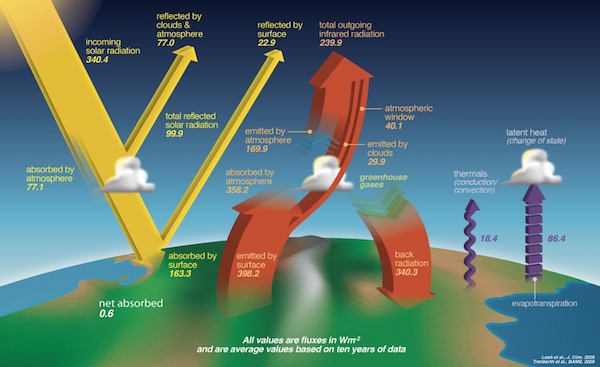 If you look at the numbers (4) in the energy budget diagram above, you see that the system is in near equilibrium. But the Earth is accumulating energy, shown as “net absorbed 0.6” in this diagram. We are not balancing our energy budget. The Earth is warming up as it seeks a new equilibrium temperature while greenhouse gas levels increase. 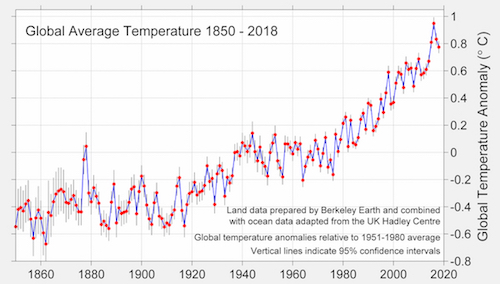 Well, that was a lot to digest. I hope it helps to make some of the science behind global warming and the greenhouse effect a little bit clearer, and show some of the ways things can get better or worse. We need to get our systems back into equilibrium so the Earth’s temperature can stabilize. Or better yet, flip the imbalance so the Earth will begin to cool off.

0. Thank you to Yoichi Shiga, a climate researcher at the Carnegie Institute for Science, for his helpful comments on an earlier version of this blog post.

1. See the third image in the previous blog post, which shows what happens to the Sun’s energy.

3. You may wonder what makes methane and nitrous oxide such powerful greenhouse gases. In general it is because they absorb wavelengths emitted by Earth that aren’t otherwise well absorbed. And because they are still so rare, each new increment of gas makes a relatively big impact.

5. If you remember from the first blog post, aerosols in the atmosphere (e.g., from pollution) can reduce the amount of solar radiation reaching Earth. This is one of the reasons why global warming flattened between 1950 and 1980 or so. Even today, scientists say that heat in India (for example) would be much worse were it not for all the air pollution in that region.

6. A nice writeup from the University of Wisconsin puts much of this material (and more) in a broader context. There is a somewhat more technical overview of this topic in a writeup for a climate course at Columbia University.