Hey Palo Altans, how is that plastics ban going?

As of January 1, plastic straws, utensils, and stirrers are no longer allowed in Palo Alto’s food-service establishments. Plastic produce bags are also banned from grocery stores. Do you miss them? Or does it seem like nothing has changed? I thought I’d take a look around the city and report back on what I saw.

It’s fair to say it’s a mixed bag so far (no pun intended). In some places there isn’t much difference. You can still find plastic straws: 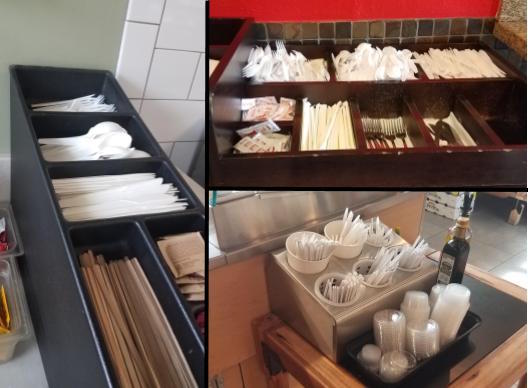 Plastic utensils can be found in many places 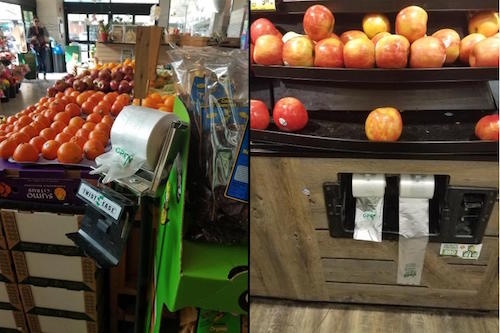 Plastic bags are still offered in a few grocery stores

One of the store managers was apologetic (“We haven’t received the order codes for the new items yet.”), and one was defiant (“We have inventory we need to use up. The city can close us if they want to.”). In other cases I didn’t ask, but you can see there is some confusion and/or difficulty in complying. As a few proprietors mentioned, the compostable items are 2-3 times the cost of plastic, and opaque paper bags used for produce and other items can slow down the checkout process.

On the other hand, there are some bright spots. Izzy’s Brooklyn Bagels, for example, has quietly switched over to compostable utensils: 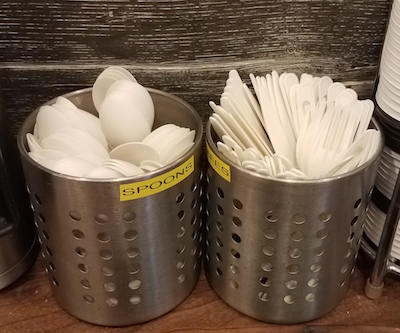 Piazza’s Fine Foods has incorporated compostables throughout its store: 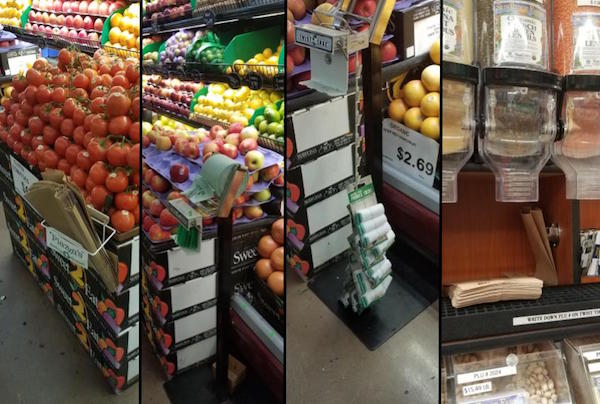 Piazza’s uses a mix of paper and compostable plastic bags, and sells reusable ones

Rick’s Ice Cream is trying a number of things, including wooden tasting spoons, an optional edible ice cream spoon, and a small discount for those who bring their own spoon. I like how they are embracing the City’s challenge and asking their customers to help out. 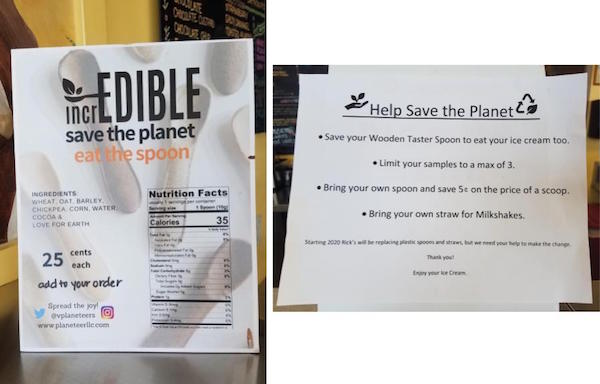 Signs at Rick’s encouraging use of compostables and reusable items

A worker at Trader Joe’s who is pretty passionate about this topic stressed how important it is that customers help out. Their store has been fined because the trash is not properly sorted, but “About 99% of that comes from the customers. If they aren’t sorting the trash properly, none of this makes a difference.” The small team at Trader Joe’s doesn’t love having to sort everyone else’s trash. “We are just a few people, and we are being asked to do a lot.” 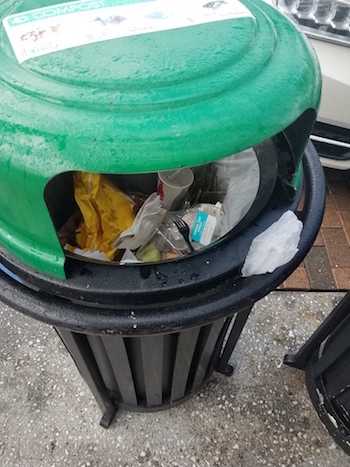 Despite good signage, there are many non-compostables in Trader Joe’s compost bin.

He reflected that people do seem to care -- they worry if they haven’t brought in their reusable grocery bags -- but then he sees people using one bag for each produce item, or throwing waste in the wrong bins (or leaving it in the carts), and it doesn’t really hang together. Perhaps people need to care more. Or maybe the problem is just too complex. Looking around the store at the pervasive plastic packaging, he added that vendors need to step up. I asked if Trader Joe’s was applying pressure, and he said he thought so, but on a one-off basis. (1) He continued: “If the state did something, that would help. Even a standard set of rules would be nice.” With most of the workers living in other cities, he said they aren’t even familiar with the local disposal rules. “We’re in a transition,” he summarized. The sooner the bigger players can help out (the state, the vendors, the federal government), the faster we will make real progress. (2)

The ultimate goal of Palo Alto’s multi-phase foodware ordinance, which will roll out over the next five years or so, is to eliminate single-use foodware and switch over to reusables. With that in mind, I tried taking my own cup or food container to a few places. Starbucks didn’t blink when I handed them a travel mug for tea (“One bag or two?”). Peet’s made a show of washing out my (clean) mug when I ordered some cocoa, but otherwise seemed okay with it. Rojo’s has no problem filling a cup from home with boba tea. On the food side, Piazza’s didn’t mind when I used a container from home with their self-serve food. Whole Food’s was also okay with it and asked at the checkout what the container weighed, so they could subtract the weight. So don’t be shy about trying this if it’s something you are interested in.

Will this make a difference? According to one estimate, plastic bag use in California has dropped from about 30 billion per year in 2005 to about 1-2 billion per year after the statewide 2016 ban, and fewer bags are found on beaches. So it can help, particularly as similar bans take hold. The effort to pass a state-wide packaging bill seems to have faltered, but a new ballot initiative is underway. In Palo Alto there is much left to do. The city will start auditing food service establishments in the spring, helping them with outreach, education, and technical assistance to bring them into compliance with the new requirements. Then the next step, tentatively slated for 2021, is to (a) ban all remaining plastic disposable foodware (e.g., cups, lids); (b) require establishments to charge for all remaining disposables (to encourage reusables); and (c) require reusable foodware in restaurants. What are your thoughts on that? What would you like to see happen? And what do you make of the changes to date?

Notes and References
1. Trader Joe’s is making some real progress on improved packaging, as they outline here.

2. Plastics bans are taking hold in countries around the world, particularly bag bans, but increasingly single-use items more generally. And it’s not just western countries like France, the rest of Europe, and Canada, but also China, Bangladesh, and many parts of southeast Asia. Enforcement (or lack thereof) is a problem, but we are starting to see some progress.

3. The first phase of Palo Alto’s foodware ordinance is described here. The full proposal can be found in this staff report, with a useful table on page 184. 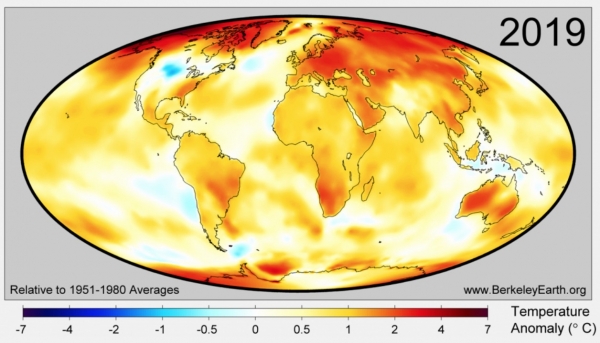 The average temperature in the US was largely unaffected last year, with the exception of Alaska and the southeast.