Downtown Los Altos is getting a massive food hall

And soon, the Peninsula will have its own food hall.

State Street Market, a two-story, 33,000-square-foot building, is currently under construction at 160 and 170 State St. in downtown Los Altos. Local developer Los Altos Community Investments, which was founded by Anne Wojcicki (the co-founder and CEO of 23andMe), is behind the project. The company declined to comment on the record at this time. 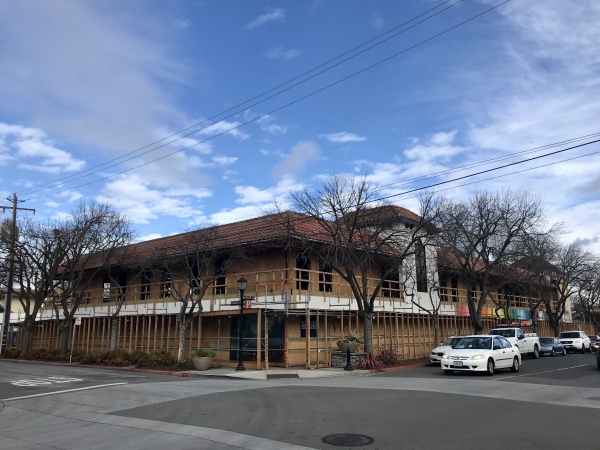 The two-story Spanish-style building at the corner of State and Third streets in downtown Los Altos is being rebuilt into a food hall. Photo by Elena Kadvany.

Plans submitted to the city show an interior and exterior remodel for a mixed-use food hall and market. The 16,505-square-foot ground floor will include a coffee bar, ice cream shop, ramen bar, raw bar, teaching kitchen, a bar, restaurant and something called "healthy bowl," according to the project plans. On the second floor, which is office space, there will also be a fitness area, lounge and meeting rooms, according to the plans.

In 2018, Wojcicki told the Los Altos Town Crier that she envisioned the project as a gathering place with "food and fun" for the Los Altos community.

"I really think of this as being a very open, multigenerational spot where there’s a lot of variety and fun," she said. "You want people just hanging out in town, you can get food, you have stuff you can do, you can meet your friends – it's a hub with social activity."

The company owns numerous downtown Los Altos properties, with food tenants including Bumble, Tin Pot Creamery, Manresa Bread and Asa Restaurant. Since starting Los Altos Community Investments in 2010, Wojcicki has invested in the city of Los Altos with "strategic long-term investments that ignite growth and vitality in the downtown," the company's website reads.

This story was updated to correct the total square footage of the State Street building.