The Weird Thing about Population Growth

There are a lot of people on the planet, with more added every day. It took 200,000 years to get to one billion people, then only 200 years to get to 7 billion. We added one billion people in just the last twelve years. Earth is home to 7.8 billion people today, and is predicted to host 8.5 billion by 2030 and nearly 10 billion by 2050. It makes you wonder — can we just slow it down? Fewer people would consume fewer resources, making it easier to manage climate change. Isn’t reducing our population easier than transforming all of our energy, transportation, and building systems? 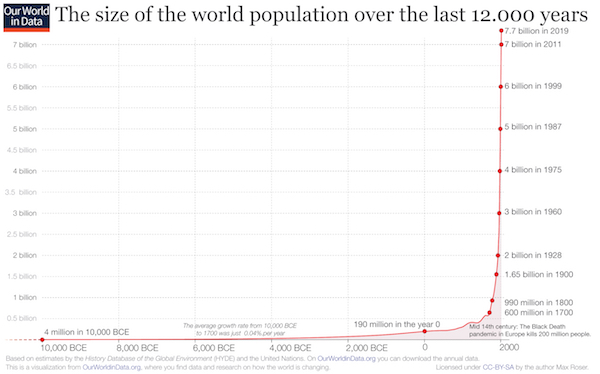 Source: Our World in Data

The high-income economies already have low birth rates, and in fact they have been well below the “replacement-level fertility” of 2.1 children for many years. (1) 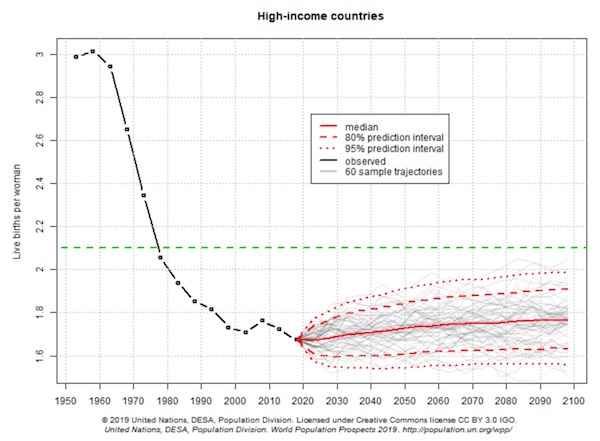 The fertility rate (2) for high-income countries has been below replacement level since 1980. Source: United Nation’s population data

And that is a good thing for our climate, because the high-income economies are responsible for many more emissions than other regions.

High-income countries, in blue, are home to 16% of the population but produce 36% of global emissions. (These are reported as “territorial emissions,” which ignore international travel and goods consumed from other countries.) Source: Our World in Data

So what is causing all of this population growth? It must be China and India, right? But China has had low fertility for decades, and India is nearly there. 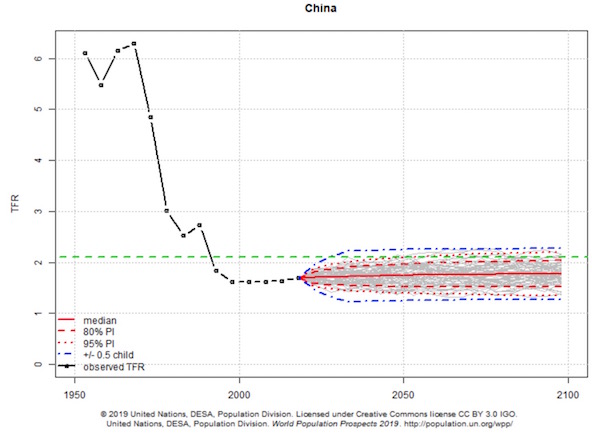 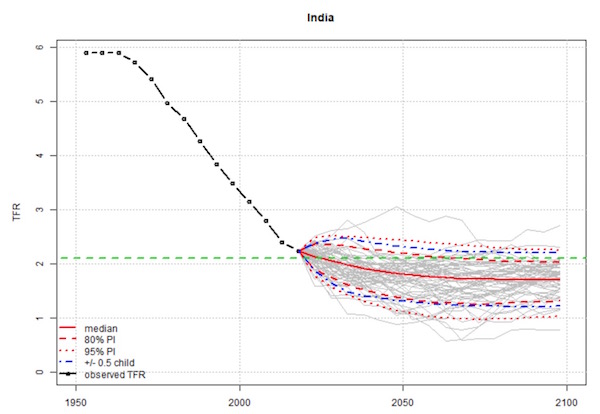 So why is our population still growing so much? Parts of Africa, especially sub-Saharan Africa, still have large families. 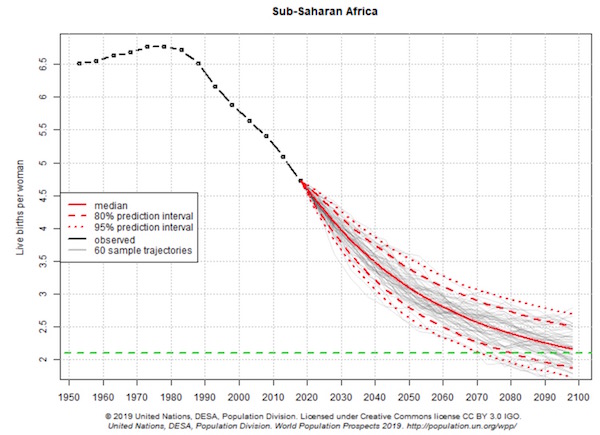 But it’s not a particularly dense area, and fertility rates are declining, so by 2050 it is projected to add “just” one billion people. Where are the other billion people coming from?

That is where the weirdness comes in. Population growth has inertia, or what is called “population momentum”. According to this overview of the concept, even if we were to instantly switch the planet’s fertility rate from today’s 2.5 to the replacement level of 2.1, and there were no change in mortality, we would still add more than a billion people by 2050. In other words, much of the projected population growth is “baked in”. How can that be?

As you know, a few things contribute to population growth. One of those is the fertility rate. More kids generally means more people. Another one is mortality rate. More deaths generally means fewer people. (3) One reason that China’s population increased despite a sharp drop in birth rate is that mortality went down at the same time due to improvements in health care.

But there is one other factor that affects global population growth, and that is the age structure of the existing population. If there are more young people than old people, then even with fertility rates at the replacement level of 2.1, births will exceed deaths for decades before the population stabilizes. And that is where Earth stands today. As the UN projects, “given the current youthful global age distribution, a substantial growth in human numbers over the remainder of the twenty-first century is nearly inevitable.”

You can see this most clearly by looking at “population pyramids”. (4) Here is what the world’s distribution looks like today. Age is on the vertical axis, with younger ages at the bottom. Each horizontal slice shows how many people are at that age, with males on the left in blue and females on the right in gold. 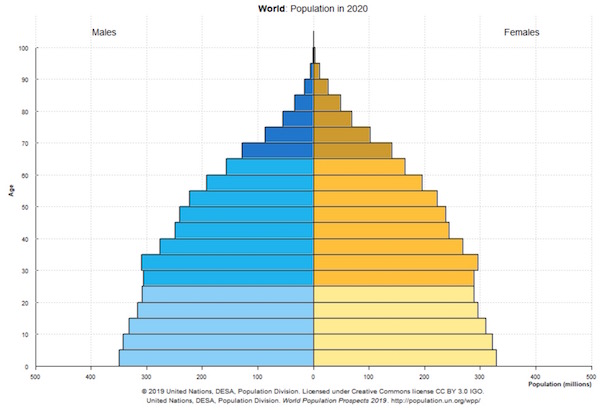 Over time, the pyramid should get narrower at the bottom as families have fewer children. But for now, the shape of the pyramid means that births will outpace deaths for many years.

You can see this playing out in the country of India. The population was growing rapidly in the second half of last century, with a clear triangular shape to the population (more younger people) that grew in width (more people at each age). But growth has been slowing and the shape is gradually losing its taper. 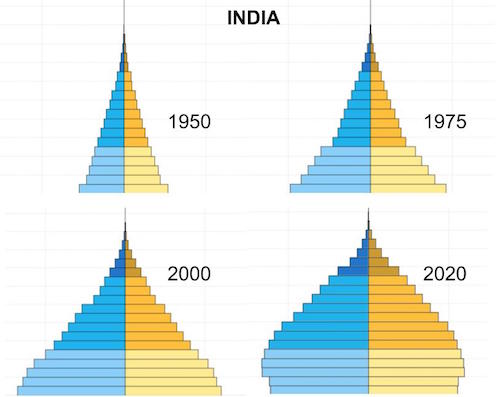 Taken to an extreme, you can imagine an inverted pyramid in a country with a much older population. Such countries have negative population momentum — their population is decreasing and it will take a while for them to turn that around if they decide to. Japan is the canonical example of that, but you can see this happening in other places, like Italy. 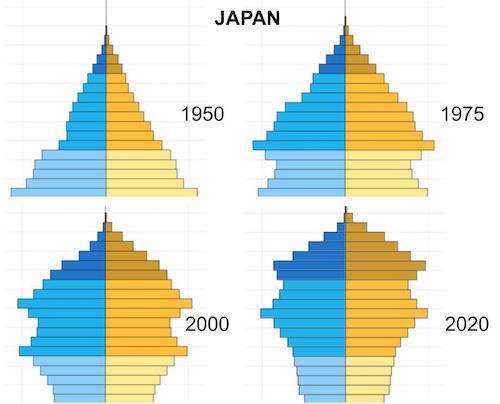 In the context of climate change a decreasing population is a good thing. But economies worry about it because the workforce shrinks relative to the dependent age brackets (children and seniors), making the economy less productive. Countries like Hungary and Poland are offering “baby bonuses”, while others like Japan are encouraging immigration to offset the age imbalance. Alternatively, a recent paper suggests there is plenty of room to improve the productivity of the existing workforce, for example by improving education and making it easier for parents (especially mothers) to participate. The authors also stress the importance of integrating immigrants effectively into the workforce. Their models show that “neither of these two strategies (encouraging more babies or immigration) pursued within realistic bounds will have as much impact as possible changes in labor-force participation, improving educational attainment and better economic integration of immigrants.” We also know that automation can augment a shrinking workforce, though it’s not always easy.

Our population needs to stabilize and even decrease if we want to use our resources sustainably. As Drawdown and others have concluded, effective ways to do that are to educate girls and make family planning available to those who want it. Increasing urbanization in rural areas also helps since urban families prefer fewer, more educated children to large numbers of children raised to be rural laborers. But for a while, our population is likely to grow. Fortunately, we know how to address climate change even as we grow. Areas where population is already stabilizing, which tend to be high-emission regions like ours, need to focus on reducing emissions and consumption. Areas where population is growing need to ensure their growth is low-emission (and we should help them with that). We can make this work. In addition to managing our population growth, we need to employ different strategies in different regions depending on how they are growing (or not), and we need to be careful to maintain productivity as our population ages.

Notes and References
1. The World Resources Institute defines replacement level fertility as “the total fertility rate—the average number of children born per woman—at which a population exactly replaces itself from one generation to the next, without migration. This rate is roughly 2.1 children per woman for most countries, although it may modestly vary with mortality rates.”

2. The United Nations defines the “total fertility rate” as “The average number of live births a hypothetical cohort of women would have at the end of their reproductive period if they were subject during their whole lives to the fertility rates of a given period and if they were not subject to mortality. It is expressed as live births per woman.”

3. One possible exception to more deaths leading to fewer people is child mortality. When many children are dying, families tend to have more children.

4. You can find an excellent overview of population pyramids in this short YouTube video from TED-Ed.

5. The United Nations maintains a terrific website for population data.

April 2020 was the globe’s second warmest April in the 141-year NOAA global temperature dataset record. Only April 2016 was warmer. But much of North America did not feel the heat. 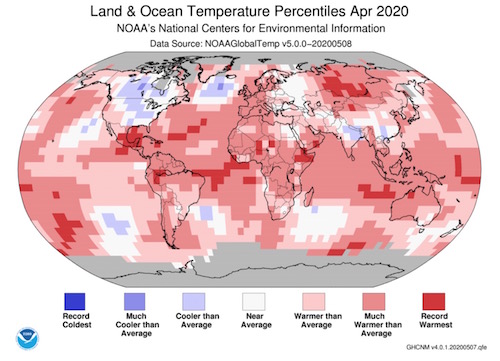