The Deck is Stacked

If you have twelve seconds, take a look at this video clip from October 2015. Candidate Trump is talking with Chris Wallace on Fox News, explaining how he would cut spending. He zeroes in on environmental protections. “TRUMP: Environmental protection, what they do is a disgrace. Every week they come out with new regulations. They're making it impossible… WALLACE: Who's going to protect the environment? TRUMP: -- they -- we'll be fine with the environment. We can leave a little bit, but you can't destroy businesses.” (1) 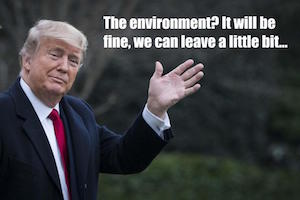 True to his word, Trump has been aggressively rolling back environmental protections. Just a few days ago, he used the pandemic economic crisis to justify waiving environmental reviews for infrastructure projects (e.g., pipeline construction) and to weaken clean air rules.

If you care about the environment, his actions are alarming. But when you look at them through the lens of socioeconomic and racial inequality, they are worse. Because who do you think will get that “little bit” and who won’t? Just as COVID-19 has exacerbated inequality, with poor people and people of color falling disproportionately ill… And just as climate change impacts the most vulnerable, with those who contributed the least suffering the most… This same effect has been occurring for decades with basic environmental protections. As a recent PNAS study put it, "(Air) pollution is disproportionately caused by whites, but disproportionately inhaled by black and Hispanic minorities."

Here is a chart showing the impact of vehicle air pollution on different races in the Northeast and Mid-Atlantic states. The percentage on the y-axis represents the deviation from statewide average.

People of color are exposed to disproportionate amounts of vehicle pollution in the Northeast and Mid-Atlantic (Source: Union of Concerned Scientists)

What about California? Those most impacted by vehicle emissions (the third, fourth, and fifth bars below) are disproportionately Latino. (Statewide demographics are shown in the right-most bar.) 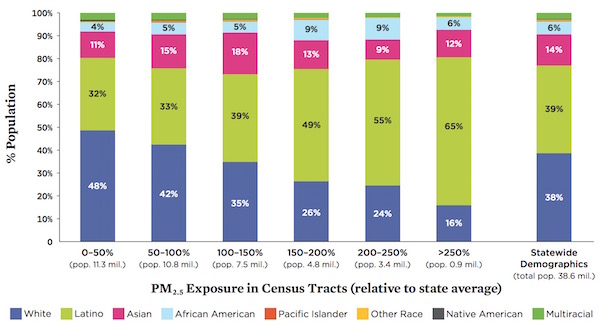 Latinos in California are exposed to disproportionate amounts of vehicle pollution (Source: Union of Concerned Scientists)

You may be thinking that this is a result of poverty — poorer people live in less expensive neighborhoods that can be more polluted. And that is true. All kinds of toxic plants, dumps, distribution centers, factory farms, and more are disproportionately located in poorer neighborhoods. As environmental regulations are rolled back and America forgets its commitment to clean air and clean water for all, inequality is exacerbated. The deck is stacked against the poor, who have limited means to fight back.

But the cause is not just poverty, it is also race. A 2018 editorial in the Lancet Public Health puts it this way: “While a common counterargument to the narrative of environmental racism is that these are conditions that arise from poverty, not racism, a growing body of evidence suggests that this is not the case, including a report from the US Environmental Protection Agency in February, 2018, which noted that ‘Disparities (in exposure to particulate emissions) for Blacks are more pronounced than are disparities on the basis of poverty status.’”

A number of organizations have worked to tease out the racial component from the poverty component. This report states “Race continues to be an independent predictor of where hazardous wastes are located, and it is a stronger predictor than income, education and other socioeconomic indicators.” You can see the table on page 78 reflecting the results of their multivariate analysis. The Atlantic reviews air pollution in this context as well.

I’m not sure it matters so much, since we know that poverty is due in part to structural racism. But how is it that race, not just poverty, results in more environmental pollution? Well, communities of color have a harder time fighting back when the establishment specifically doesn’t listen to them. And if the EPA sits on their cases, they cannot be heard. An evaluation of the EPA’s Office of Civil Rights found that: “In the office’s 22-year history of reviewing nearly 300 complaints, the agency has never made a single finding of a civil rights violation. Nine in every 10 complaints are rejected or dismissed….Filing a complaint with the EPA doesn’t stop an action from happening, and in four of the five cases the action that sparked the original complaint—permitting a new power plant or expanding a refinery, for example—has already been carried out.” Racism can delay the response after an environmental disaster, as reported with Hurricane Katrina. And even when some degree of help is available, there may be a lack of trust between people of color and the environmental movement. A self-described “black tree hugger” writes in the Guardian that his grandparents were bemused by his environmentalism. Their “interactions with the environmental movement were not particularly positive; they contended that, in their time, most environmentalists cared more about protecting remote habitats than protecting their black neighbors from discrimination and violence.” Environmental organizations in the US are still predominantly white.

When it comes to living in a healthy environment, something many of us take for granted, the deck is stacked not just against poor people, but against people of color. They disproportionately bear the burden of pollution, whether it is toxic waste, incinerators, vehicles, farm waste, or pesticides. They have less access to environmental benefits and spend less time in our national parks. They are less able to fight back and have less means to adapt to the changing climate. 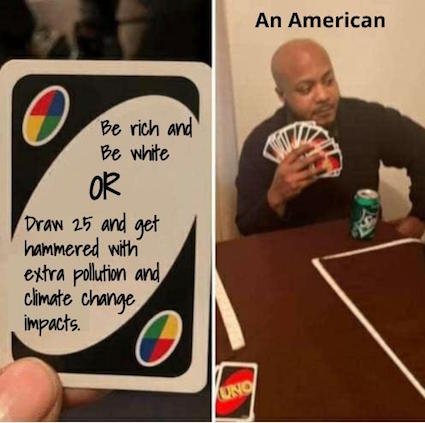 So it is no wonder that Yale reported a few months ago that people of color care more than others about environmental protection and global warming. (2) They recognize that if there is only a “little bit” left of a clean environment, they probably won’t be getting it.

We must do better. Clean air and clean water are fundamental rights of everyone, however impoverished, of whatever race. The current administration continues to target the most vulnerable with its environmental rollbacks, its funding decisions, and its willful ignorance about climate change. This post started off with Trump’s point of view about the environment. I want to end with this one, from a story from Earthjustice. 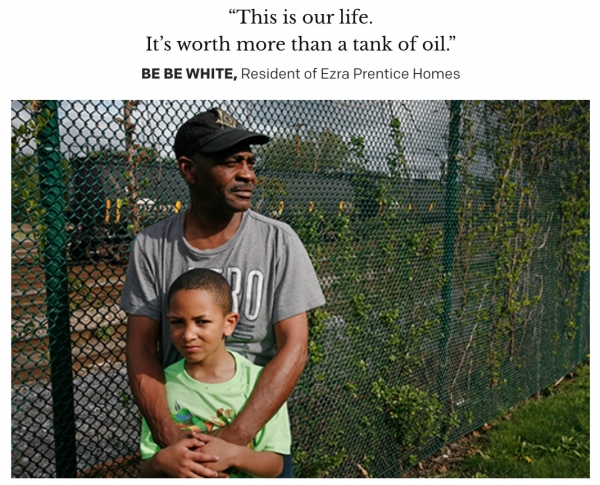 Notes and References
1. You can find the full video for context, along with a transcript, here.

2. While some of this difference can be attributed to party affiliation, there is more to it. “Hispanics/Latinos … are still more Alarmed or Concerned than are Whites, even when controlling for differences in party identification.”