It started with a box of cherries.

Maria Gregorio, a Palo Alto resident and Stanford University IT professional, saw a Nextdoor post in May from a neighbor organizing a group buy of farm-fresh cherries. She eagerly bought a box and was chagrined when the neighbor didn't continue it the following week. He connected her with the farmer, so she put her own Nextdoor post up, asking if anyone wanted to buy cherries in bulk with her. The response was "astronomical," she said.

What started as an informal neighborhood purchase of cherries has since evolved into a streamlined weekly pickup operation of fresh fruits and vegetables from multiple farms. 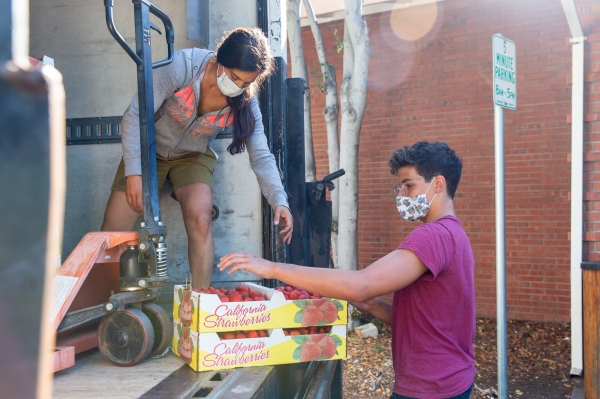 It's a virtuous cycle: Farms that are struggling to make up for lost revenue due to the coronavirus shutdown can sell in bulk directly to customers, while local residents get direct access to high quality, organic produce. Because the orders are made in bulk, the farms are able to offer a discount, so Gregorio donates the proceeds to local nonprofits, to fund meals for front line workers and to a coworker's fundraising effort to provide 3D-printed face shields to health care providers. Unclaimed orders go to local homeless shelters and care homes for the elderly.

About two months in, Gregorio estimates she's donated over $5,000 through the effort, dubbed Giving Fruits.

"Anybody could really make a difference if you really want to," Gregorio said in a previous interview. "If you just put your heart in the right place, people will see your sincerity and the fruits of your labor."

Every week, Gregorio posts what's available from the farms and people place their orders online. On the Giving Fruits menu this week: white nectarines and pluots from Kashiwase Farm in Winston, yellow and white peaches from The Peach Jamboree in Oroville, strawberries and summer squash from Oya Organics in Hollister, plus pints of frozen custard and sorbet from Lexie's Frozen Custard in Berkeley. Because of the volume, the prices are a steal: $34 for 12 pints of organic strawberries or $20 for 12 pounds of squash. 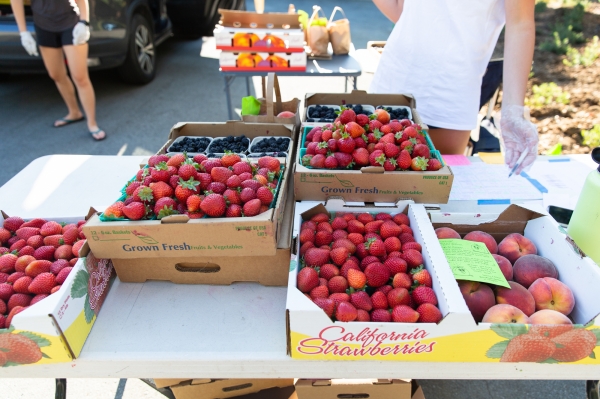 Flats of fresh berries and peaches from the Giving Fruits drive-through on July 17, 2020. Photo by Magali Gauthier.

People pay Gregorio through Venmo or PayPal and pick up their orders every Friday evening at a contactless drive-through outside Rinconada Library in Palo Alto. Last Friday, a long line of cars stretched out of the parking lot as masked volunteers placed flats of fruit in car trunks. For anyone who's elderly or immuno-compromised, Gregorio finds volunteers to deliver their orders. 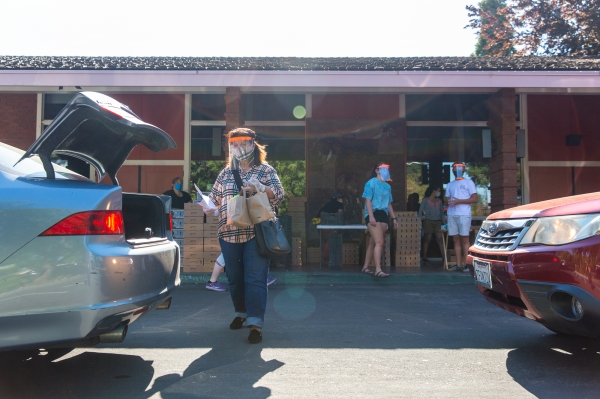 Palo Alto resident Maria Gregorio places bags of peaches in a car at a drive-through she organized to help local farmers struggling during the coronavirus pandemic.

Marsha Habib, who owns Oya Organics and lives in Palo Alto, said her 20-acre vegetable farm saw sales disappear almost overnight due to the pandemic. Gone was a weekly account with Stanford University and demand from restaurants. They had to till under ready-to-harvest crops — butter lettuce, fava beans, kale, cauliflower — that they had planted for specific restaurants. Some restaurant accounts have since come back, but their volume is vastly reduced, Habib said. At the same time, with people sheltering in place and grocery stores crowded, demand for Oya Organics' community supported agriculture (CSA) program shot up from 12 members to over 200, leaving her racing to create the infrastructure to support such volume. She had to pull workers from the fields to help her pack boxes and organize deliveries.

Participating in Giving Fruits appealed to her for all these reasons, but also for the opportunity to support other small farmers. She's helped connect Gregorio with other farms to partner with Giving Fruits.

"It's been of course a challenge to scramble and find different ways to sell and be safe about it. But at the same time, it's kind of like shelter in place and the breakdown of the existing conventional food chains has been a big eye opener — a chance for small farms to be highlighted and for us to really step into a role of being essential to getting people food locally," Habib said. "I really hope that's a lasting impact."

Gregorio said the original woman with the cherries who started it all -- who it turns out is not a farmer herself, but a hairdresser who started buying and selling cherries to make ends meet during the shutdown -- became emotional the first time she received the payment for the orders that went to Palo Alto. The woman hadn't been sure how she was going to be able to pay her rent that month and was worried she'd be evicted, Gregorio said. 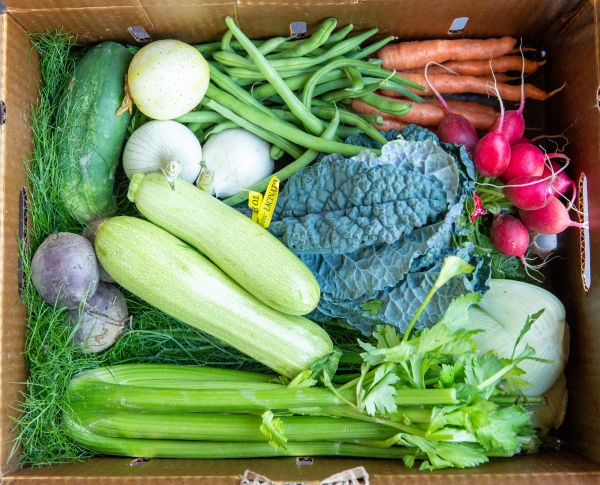 A box of organic vegetables from Oya Organics farm in Hollister. Photo by Magali Gauthier.

Selling directly to customers through Giving Fruits is the best kind of model for small farmers, Habib said, compared to wholesale accounts that involve "a lot of hands and a lot of markups. That money isn't going back to the farmer," she said.

As word about Giving Fruits has spread, it's become a more involved, volunteer-run effort. Gregorio's teenage sons have taken over much of the daily operations, including monitoring who's paid for what and sending orders to the farms. A local law firm reached out to Gregorio to offer her pro bono help to form a nonprofit.

Giving Fruits has expanded to other cities as well: Her sons' friends, two college students home because of the coronavirus, started picking up orders in Palo Alto and offering their own pickup site for neighbors in Portola Valley. Two high schoolers in Pleasanton reached out to do the same there. 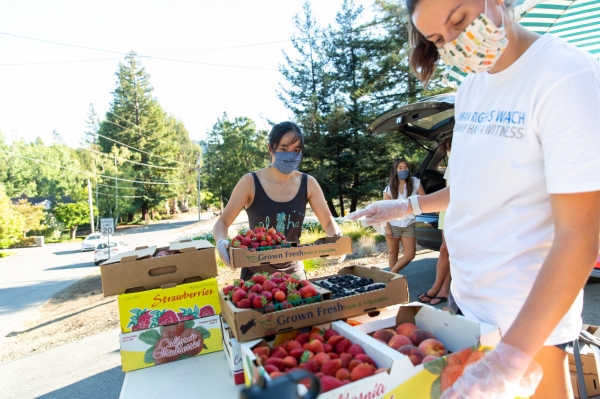 Emily Hong and Olivia Vercruysse, two college students who live in Portola Valley, pick up neighbors' orders from Giving Fruits in Palo Alto and bring them to Vercruysse's house, where residents can then pick up their produce. Photo by Magali Gauthier.

Because the farms sell in bulk, Gregorio said she's seen small communities form around picking up the produce — groups of neighbors or friends who decide to purchase boxes together and split up the fruits and vegetables.

For more information about Giving Fruits and to place an order, go to givingfruits.org.