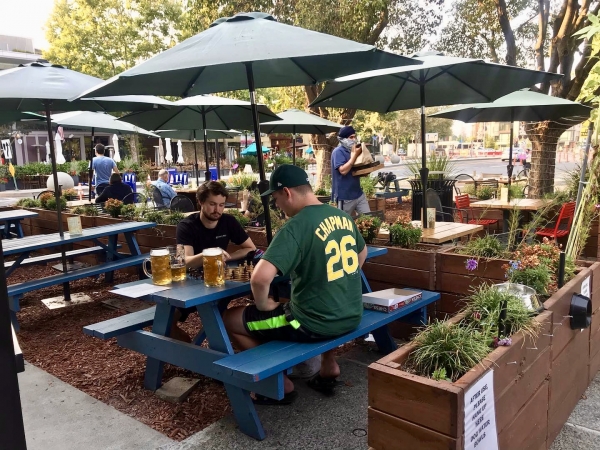 Das Bierhauz opened at 135 Castro St. in late August, serving German beers and bratwurst. Olympus owner Mehmet Vural said the beer garden concept made sense since cafe already had numerous beers on draft, plus a "beautiful" patio they wanted to take advantage of.

"You need to survive during this period," he said.

Das Bierhauz has more than a dozen German beers on draft, plus bottles and some wine. Customers have the option of a half liter, sampler flight or 1-liter "das boot" glass. For food, there's plenty of German fare —several kinds of bratwurst, a Bavarian pretzel, doner kebab sandwich and chicken schnitzel with spaetzle — plus burgers, chicken nuggets and nachos. Das Bierhauz also serves omelettes, crepes and pancakes for brunch on Saturday and Sunday from 10 a.m. to 3 p.m.

Vural said they want Das Bierhauz to be casual and family friendly. There's free WiFi, board games and pets are allowed on the patio.

"This is not like a bar," he said. "It's welcoming of everybody."

Das Bierhauz is open daily from noon to 10 p.m.