Chez TJ, which has been closed since the start of shelter-in-place in March, will reopen this month in Mountain View with several major changes in place.

The longtime Michelin-starred French restaurant at 938 Villa St. has a new chef, outdoor patio and alternatives to its usual tasting menu, which pre-pandemic was served inside small dining rooms in a historic Victorian house and could last as long as three hours.

"Chez TJ wants to do everything on our end to ensure the well-being of our guests and employees, and we have heavily invested in renovating and updating our kitchen and seating to make our dining experience safe and enjoyable for everyone," reads an email sent from the restaurant this week. 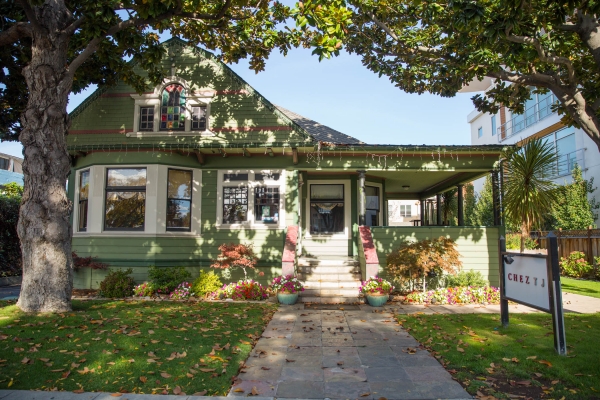 Chez TJ is reopening in Mountain View after a six-month closure. Photo by Michelle Le.

The restaurant added "improved" air filtration systems to the four intimate indoor dining rooms, new sanitation and work stations in the kitchen and a new outdoor patio and lounge, the email reads.

Gallagher, who led the kitchen for the last eight years, has left to pursue other projects. He's helping to open several food and drink concepts in the ground floor of the Shashi Group hotel project at 1625 N. Shoreline Blvd. in Mountain View — a bar called Emerald Hour (opening in October), a casual Spanish restaurant called Broma (opening in 2021), a coffee shop called Carte Blanche and a fine dining restaurant called Belle Terre (opening in 2022). He's also opening a restaurant in San Juan Bautista near where he lives.

Lemerand, a native of Michigan, attended the Culinary Institute of America in New York, after which he worked with the Besh Restaurant Group in New Orleans, according to the Chez TJ email. He left New Orleans for San Francisco, where he worked at a number of fine dining restaurants, including Atelier Crenn, SPQR, Michael Mina's Bourbon Steak at the Westin St. Francis and Coi. Lemerand then traveled for a year before a chef-friend turned him on to a job at Darioush, a winery in Napa, where he's been sous chef since 2018, according to his LinkedIn.

Chez TJ will start serving dinner again on Sept. 15, with reservations available for Tuesdays through Saturdays.