Tempura shrimp banh mi or kimchi spam udon: "Why not try something new and see where it goes?"

Chef Sok Hor is cooking up old favorites in new ways at Asian Farm Cuisine in Redwood City. Since opening in the spring, Hor and her family have been refining the menu, figuring out what resonates best with hungry guests at 3176 Middlefield Rd.

Owned by Hor's son Nick Khov, the restaurant has drawn diners from as far as San Jose just for the pad thai burrito. The dish riffs on a favorite pad thai recipe at Asya, another restaurant by Khov, featuring Japanese and Thai cuisine at 3215 Oak Knoll Dr (also in Redwood City). The burrito, however, is unique to Asian Farm. Khov's younger brother, Try, got the idea from social media for bringing together the best of both worlds, adding noodles to burritos. He saw potential in a ramen burrito, as well as Panda Express's introduction of an orange chicken chow mein burrito.

"I said, 'Why not try something new and see where it goes?" Try Khov says.

This spirit of inventiveness extends to other dishes too. There's a shrimp tempura banh mi that takes inspiration from Vietnamese sandwiches, and incorporates elements from a sushi roll with special sauce, imitation crab and deep fried shrimp. There's also udon served with kimchi and Spam.

"In this day and age, it's not that you open a store and people will come," Try Khov says. "Everybody wants an Instagrammable picture, and a new concept they haven't done before."

Originally, the family aimed to offer a fast-casual Chinese food experience at Asian Farm. "Think of a Panda Express- or Chipotle-style restaurant," Try Khov says. But with those restaurants already so firmly established, they found it hard to stand out from the competition. They also wanted to improve on the business model for better food. 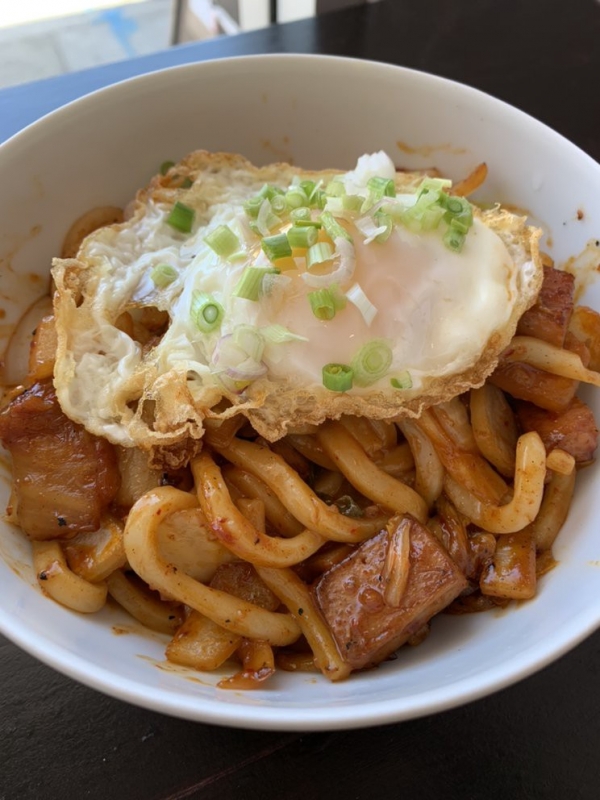 Asian Farm Cuisine specializes in fusion Asian dishes, such as udon with kimchi and Spam. (Photo via Yelp)

"A lot of the issues we had were logistical: How could we better prep the food, and keep it for customers that come later in the day?" Try Khov says. "Now we cook the food as people order to maintain freshness and quality, while minimizing food waste."

Asian Farm offers takeout and delivery. On site, there are a few tables guests can sit at after ordering from the counter. Those who visit can also pick up freshly baked croissants, muffins and bagels at Brew Coffee — the cafe and bakery, owned by Try Khov's brother-in-law Ken Huot, shares the same space as Asian Farm.

If you have room for dessert (say, something peanut butter and jelly- or Chocolate Nutella-inspired), Brew Coffee is also now collaborating with Yessi's Cake Creations, a fellow Redwood City business. Its founder first started coming to the Middlefield Road location as a customer, and the family was taken by a cake she made for an anniversary celebration. "It's just absolutely adorbs," Try Khov says. Now Brew Coffee offers customers her cupcakes alongside matcha lattes, blended drinks with boba, coffee and other treats. 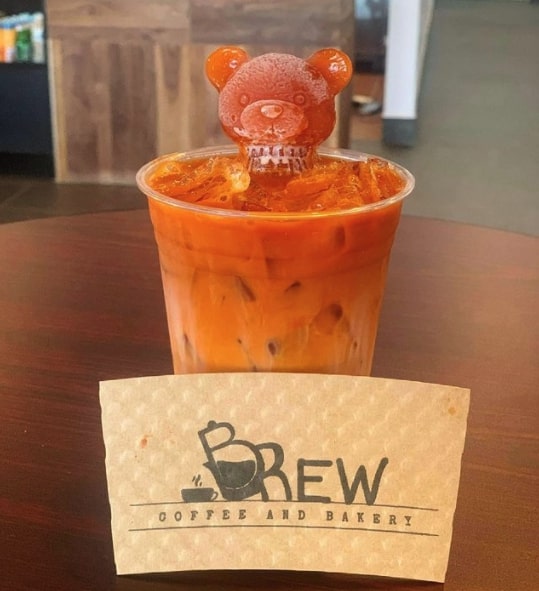 "In the future we might scale it up and do cakes. It's just great in terms of local businesses doing partnerships with each other. I find that really great, especially during these times," Try Khov says.

From dad Hong Cheam's Donut Delite in San Mateo to bagels in Oakland, the family's been cooking up different creations throughout the Bay Area for more than 20 years. Try Khov says they'll continue to do so, including at Asian Farm and Brew Coffee.

"We're still experimenting on a few things," he says. "Our current menu is not going to be our final menu."