Anatolian Kitchen is closed, making way for a new concept: By no later than February, restaurateur Dino Tekdemir and team are aiming to reopen as Naschmarkt Palo Alto, a sister restaurant to a successful location in Campbell. The Naschmarkt restaurants are inspired by a popular food market in Vienna.

"Once we open, we want everyone back here," says Tekdemir, who also co-owned Anatolian Kitchen. "I'm doing everything for them to make them happy." 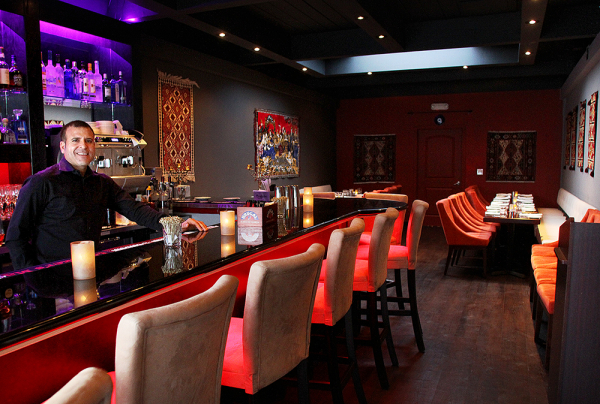 Restaurateur Dino Tekdemir and his team are remodeling Anatolian Kitchen, with plans to reopen the restaurant as Naschmarkt Palo Alto in early 2022. Photo by Veronica Weber.

Anatolian Kitchen opened more than a decade ago. The restaurant was led by a family, owned by Tekdemir and his brother, both from Diyarbakir, a Kurdish area in southeastern Turkey. At the Palo Alto restaurant, Tekdemir met the person he would marry, who worked there too. Together, they created a homey atmosphere and Kurdish and Turkish specialities, as recounted in an episode of the restaurant review show "Check, Please! Bay Area."

"We're grateful for that time," Tekdemir says of their years dedicated to Anatolian Kitchen.

Now, the team is shifting their focus. Since closing the restaurant at 2323 Birch St., remodeling has been underway to capture the atmosphere of Naschmarkt Restaurant in Campbell, which serves Austrian fare.

From the Campbell location, general manager Yalcin Odabasi, chef Carlos Morales and bar manager Salvatore Marotto will be working with the team in Palo Alto.

The menu will include dishes like red cabbage soup, pretzels, sauerkraut, duck pot pie, wiener schnitzel and beef goulash, as well as more than 30 beers from all over Europe, and wines from Germany and Austria.

The ambience will be warm — "squishy," even, and incorporate red brick walls, Tekdemir says.

"(Naschmarkt) has been very successful. We want to create a brand," Tekdemir says. "Our chef is amazing, our staff is good. It's a beautiful restaurant."

One reason for the change is to manage the labor shortage at a time when 3 out of 4 restaurant operators say recruitment and retention is their toughest challenge.

Tekdemir says it's difficult to find and train new staff, so replicating the existing restaurant's concept will allow the current team to use their skills and work in both locations.

The other reason is to satisfy customers' tastes. "We have the larger community. They are from different areas," Tekdemir says. "I really know what their expectations are, what they're looking for and what is missing in this area. I try to fill up that gap."

Like the Viennese market that is the restaurant's namesake, the menu will reflect regional variety and influences from the broader area.

"If you look at the map, (Austria's) located in the center of Europe," Tekdemir says. "All that region is going to be included."

Tekdemir has been working in the Peninsula restaurant industry for more than a decade. After arriving in the U.S., Tekdemir worked as a janitor, busser, server and manager. After nine years, he pursued opening his own restaurant. In addition to Anatolian Kitchen and Naschmarkt, he owns Nemea Greek Taverna in San Jose.

"Most customers know me, because I've been here a long time," Tekdemir says.

With a laugh, Tekdemir continues, "I want to let them know that — don't worry, something very good is coming. You won't be missing Anatolian Kitchen, because you'll be thankful for me opening Naschmarkt."