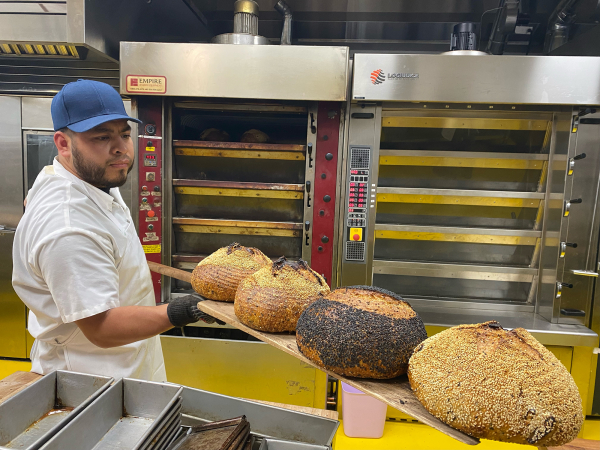 Just across the Caltrain station, next to Philz Coffee, a brick-and-mortar store is a much anticipated next step in the bakery's evolution for owner Tian Mayimin, who started her business out of her Menlo Park home in 2017.

In addition to the Santa Cruz shop, which quietly opened early March, Mayimin also secured a lease at 1010 El Camino Real, formerly the Borrone MarketBar, and expects to open a cafe, Little Sky Kitchen, to serve prepared foods around the summer. Mayimin emphasized that the start date is tentative.

"This was always the plan," she said. "It just took me a while to get to it."

Little Sky Bakery previously operated out of a rented shared bakery in Redwood City to stock its farmers market stands and delivery operations across the Peninsula.

With a physical location that holds two deck ovens, industrial walk-in ovens and about a dozen bakers, Mayimin said she hopes to double Little Sky's baking capacity and greatly expand her menu.

"One of the things I realized was that I was only introducing people to about a third or a quarter of what I want to make," she said.

A former criminal defense attorney, Mayimin started her business out of her Menlo Park home with a single, red Le Creuset Dutch oven — a hand-me-down from her mother-in-law who received the pot as a wedding gift from her parents, she said.

"It's totally unexpected for me that I am now a baker," Mayimin told the Almanac in 2017. "I couldn't have imagined it even several months ago."

Mayimin started out by delivering baked goods to people's homes for free and spread the word through postcards distributed around the neighborhood and word-of-mouth. In a few months, she began hosting a stand in downtown Palo Alto before it proliferated into 10 other farmers markets across the Peninsula, including Menlo Park, Portola Valley, Los Altos and Mountain View.

Some of her staple items became the country bread, artisan sourdough baguette, an assortment of giant cookies, gluten-free breakfast bars and a cinnamon pain de mie, which Mayimin described as a "lighter cousin of brioche."

Opening a brick-and-mortar store was a plan that felt "immediately right" for the baker since she started her business five years ago, but getting the capital was just one of many challenges that slowed the process. Mayimin has since had two children, the youngest a fourth-month-old, and experienced the loss of her father.

"It's just life," she quipped.

Despite the new location and an upcoming cafe, Mayimin said she plans to continue her farmers market operations and hopes to expand the delivery service, which stretches along the Peninsula from San Mateo to Sunnyvale.

"We're really thankful to our farmers markets, they're really our bread and butter," she said. "And then during the pandemic, our delivery business really stepped up and supported us."

There's no signage yet for the store, but customers will be able to buy baked goods right outside the entrance of the new location from 9 a.m. to 1 p.m., Wednesday through Sunday.

While anticipating a new menu and increased production, Mayimin does ask her customers to give her bakery some time.

"We like the idea of a slow organic start," she said.