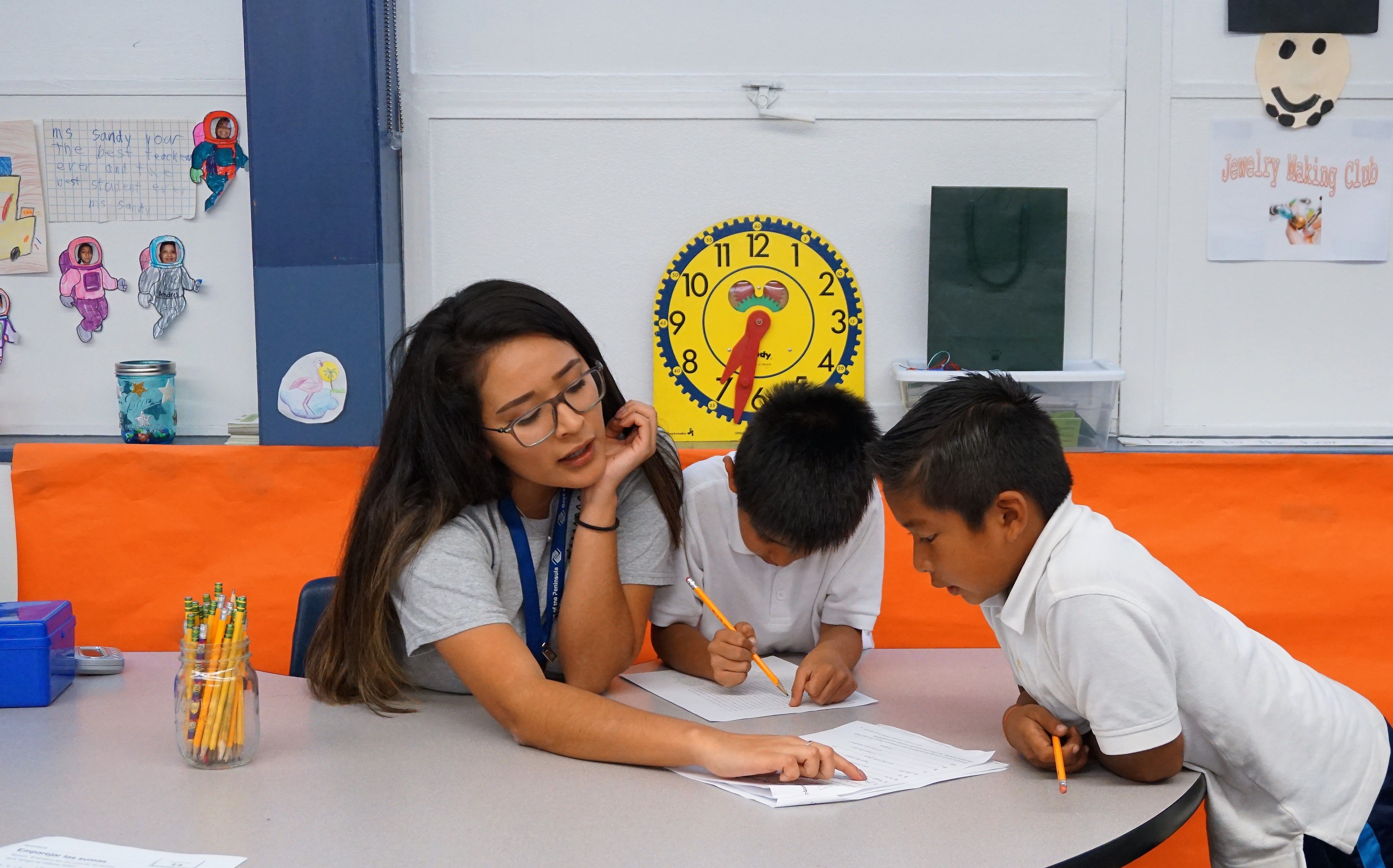 Club instructor Sandy Orozco is a former BGCP student, and was chosen 2014 Youth of the Year. An instructor in the nonprofit's intensive literacy program, she supports second and third graders in achieving grade-level reading proficiency. Photo courtesy of the Boys & Girls Clubs of the Peninsula.

Jorge has been a member of the Boys & Girls Clubs of the Peninsula (BGCP) since kindergarten and is typically shy and hesitant to take the spotlight. Last spring, when BGCP mentors encouraged him to present an eighth grade speech, Jorge worked with his mentors to improve his writing and public speaking, skills that Jorge knew would be vital to his future success in school.

At the 8th Grade Gala, Jorge gave a commanding speech in front of 100 peers, teachers, and community members about the need for computer science and other programs that prepare low-income youth of color to be competitive in the 21st century job market. His parents and community were proud, but, more importantly, he was proud of himself.

Jorge is one of 2,500 low-income K-post-secondary students benefiting from BGCP programs at three clubhouses and 10 school sites in East Palo Alto, eastern Menlo Park and Redwood City. Although our students live adjacent to some of the wealthiest communities in the world, BGCP students are primarily low-income students of color, and face tremendous odds. Nationwide, only 8% of Latino students graduate from college.

"For students at the Boys & Girls Clubs of the Peninsula, it's not a matter of lack of skill, talent or intelligence. The difference is the lack of opportunities that our students have access to," says Esmeralda Ortiz, senior director of high school and post-secondary success programs

BGCP, one of 10 beneficiaries of The Almanac's Holiday Fund this year, wants kids' futures to depend more upon their own actions than upon the circumstances into which they were born. We are not selective and welcome all K-12 students.

Our goal is to provide students with engaging learning experiences, exposure to opportunities that develop interests and passions, relationships with positive role models, and the academic and life skills required to graduate high school and pursue post-secondary education or training.

In addition to the academic support, enrichment, and social-emotional learning programs for all students, students who are at-risk of falling off-track for school success receive intensive second and third grade literacy interventions and sixth through ninth grade one-on-one advising, social-emotional coaching and goal-setting support.

BGCP students also have access to five full-time on-site therapists to address mental health challenges, which are a barrier to many students' success.

After participating in BGCP's summer high school transition program, Jorge is flourishing in ninth grade and demonstrating both personal and academic confidence. The next step in BGCP's K-12 continuum is our Future Grads program, which supports 10th grade through post-secondary students to become the first in their family to graduate from college.

BGCP staff will be proud to see Jorge and many BGCP peers join the over 200 Future Grad students who have graduated high school and the 89% that have enrolled in college.

To learn more about the nonprofit, visit bgcp.org.

Ecumenical Hunger Program
Provides emergency food, clothing, household essentials, and sometimes financial assistance to families in need, regardless of religious preference, including Thanksgiving and Christmas baskets for more than 2,000 households.

Health Connected
Serves over 5,000 students and their families each year through comprehensive sexual health education programs. Students learn to have ongoing communication with parents and to make informed decisions that will apply to their lives, now and in the future.

LifeMoves
Provides shelter/housing and supportive services across 18 sites in Silicon Valley and the Peninsula. Serves thousands of homeless families and individuals annually on their path back to permanent housing and self-sufficiency.

Ravenswood Family Health Center
Provides primary medical and preventive health care for all ages at its clinic in East Palo Alto. Of the more than 17,000 registered patients, most are low-income and uninsured and live in the ethnically diverse East Palo Alto, Belle Haven, and North Fair Oaks areas.

St. Anthony's Padua Dining Room
Serves hundreds of hot meals six days a week to people in need who walk through the doors. Funded by voluntary contributions and community grants, St. Anthony's is the largest dining room for the needy between San Francisco and San Jose. It also offers take-home bags of food, as well as emergency food and clothing assistance.

Upward Scholars
Upward Scholars empowers low-income adults by providing them with financial support, tutoring, and other assistance so they can continue their education, get higher-paying jobs, and serve as role models and advocates for their children.