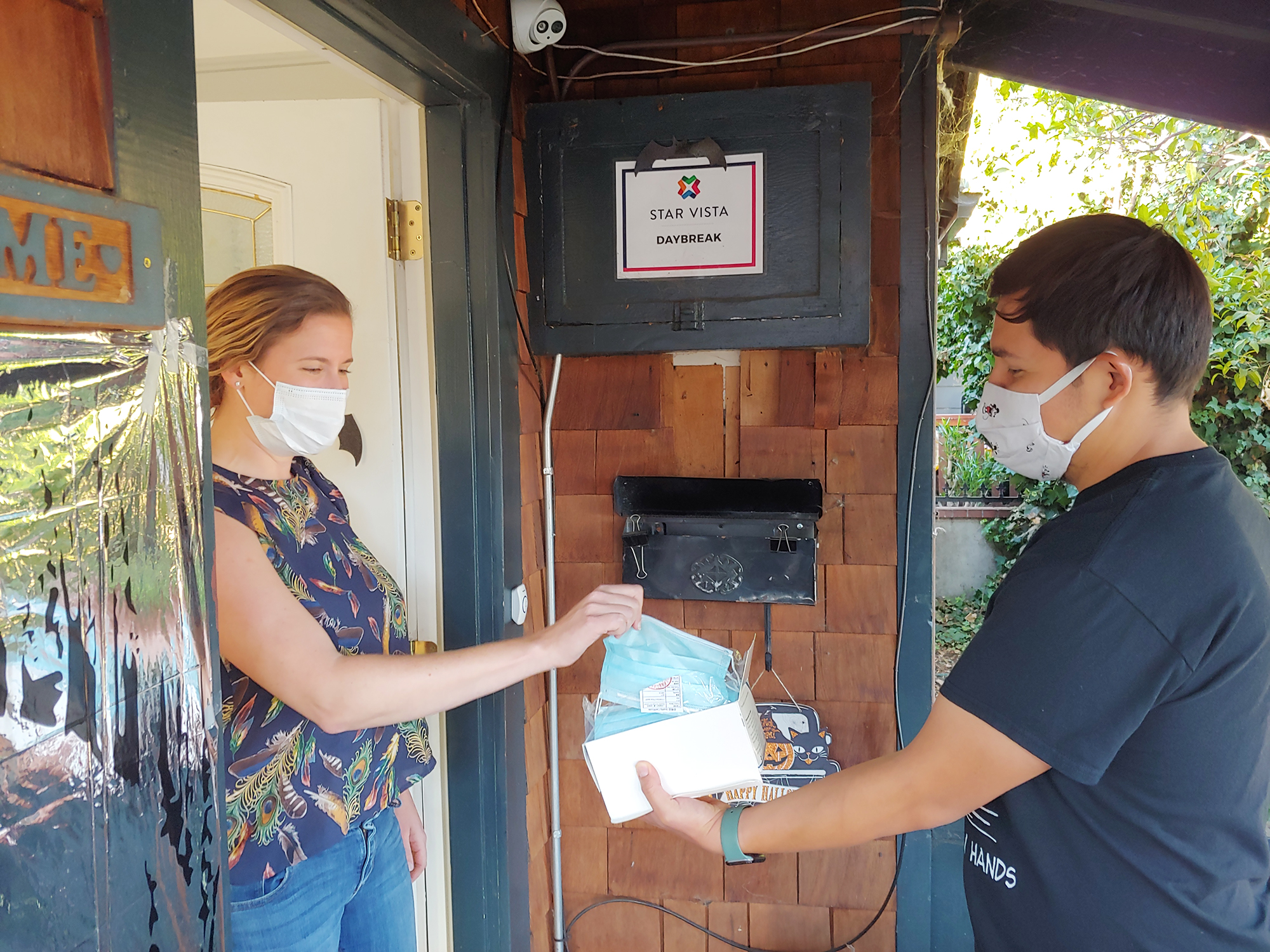 Mornings at DayBreak, a transitional housing program in Redwood City, start with walking downstairs to say "good morning," a quick temperature check and cooking breakfast before logging onto an online class from the couch in the living room.

The 30-year-old program, run by San Carlos-based nonprofit StarVista , houses homeless 16- to 21-year-olds and is still offering its services despite the COVID-19 pandemic, albeit with some changes.

Health screenings are just one change, along with wearing masks, social distancing from others around the house and staying in at night. Therapy sessions have moved to Zoom. The precautions are especially necessary since COVID can often present without symptoms in this demographic, said Program Manager Michelle Mayes.

So far, no DayBreak residents have tested positive for the virus.

The program, which usually serves 10 young adults from San Mateo County, has capped housing at seven residents since April because of the pandemic. A staff of seven full-time employees run the operation, said Mayes. StarVista's services include counseling, skill development, and crisis prevention to children, youth, adults and families.

"We have a really brave team that are still willing to work during a pandemic," she said.

StarVista is one of the beneficiaries of The Almanac's Holiday Fund. Because The Almanac and its partner the Silicon Valley Community Foundation cover all the administrative costs, every dollar raised goes directly to this year's 10 nonprofit organizations. Donations to the Holiday Fund can be made here .

Some tensions over cleanliness and noise have arisen between residents who feel cooped up at home all the time, Mayes said. During the spring, it was also challenging for residents to land jobs, given the economical upheaval caused by the pandemic. Overall, residents are respecting safety guidelines, such as hand-washing, wearing a mask outside of their bedroom and bathroom, and using hand sanitizer, she said.

Clients stay in the house for about six months on average. Staff members provide them with training in finding and keeping a job; personal health and self-care; money management; meal planning and preparation; performing daily chores; locating and renting housing; and pursuing educational opportunities. Residents are required to attend school and work.

This year, of the residents who stayed for more than 30 days, 73% transitioned to a positive placement, 80% were either enrolled in school or had their GEDs, and 100% were referred to appropriate substance abuse treatment providers if needed, according to StarVista .

StarVista's services were first known in San Mateo County in 1966 under the name of "Peninsula Suicide Prevention, Inc." a small human services agency, according to StarVista's website. It grew into Youth and Family Enrichment Services and adopted the name "StarVista" in 2011. Its staff now includes 240 doctors, clinicians, social workers, and professionals and 45 clinical interns who work with 41,000 individuals and families annually.

Earlier this year, former Daybreak client Ozzy filmed a testimonial video explaining how StarVista helped him become more mature and responsible, and opened up doors to him. He now wants to become a counselor or a therapist.

"They've shown me I can count on someone and what a friend looks like," he said. "My life now is full of friends. I have my own place. I bought a new car, I have a steady job."

When someone is homeless, sometimes their grades fall and they lose their jobs, Mayes said. It's great to see them transform their education and career, she said. Mayes said one resident saved $10,000 while part of DayBreak.

"It's great to see them (DayBreak residents) blossom into themselves," she said. "And see them feel as if they can achieve their goals."

The pandemic has given staff an even greater sense of purpose, said StarVista CEO Sara Mitchell during a recent discussion the nonprofit hosted over Zoom.

"I think they've always been very passionate about the work that they do, but they see the ways that they are positively making changes in the community despite all of the challenges," Mitchell said. "On the flip side, for our clients, in the midst of so much uncertainty, there's a sense of 'when will this end.' For the individuals we serve, they feel a sense of reassurance knowing that there's this organization of people who care about them and are invested in their communities.".

For more on StarVista and DayBreak, go here.

Ecumenical Hunger Program
Provides emergency food, clothing, household essentials, and sometimes financial assistance to families in need, regardless of religious preference, including Thanksgiving and Christmas baskets for more than 2,000 households.

Health Connected
Serves over 5,000 students and their families each year through comprehensive sexual health education programs. Students learn to have ongoing communication with parents and to make informed decisions that will apply to their lives, now and in the future.

LifeMoves
Provides shelter/housing and supportive services across 18 sites in Silicon Valley and the Peninsula. Serves thousands of homeless families and individuals annually on their path back to permanent housing and self-sufficiency.

Ravenswood Family Health Center
Provides primary medical and preventive health care for all ages at its clinic in East Palo Alto. Of the more than 17,000 registered patients, most are low-income and uninsured and live in the ethnically diverse East Palo Alto, Belle Haven, and North Fair Oaks areas.

St. Anthony's Padua Dining Room
Serves hundreds of hot meals six days a week to people in need who walk through the doors. Funded by voluntary contributions and community grants, St. Anthony's is the largest dining room for the needy between San Francisco and San Jose. It also offers take-home bags of food, as well as emergency food and clothing assistance.

Upward Scholars
Upward Scholars empowers low-income adults by providing them with financial support, tutoring, and other assistance so they can continue their education, get higher-paying jobs, and serve as role models and advocates for their children.