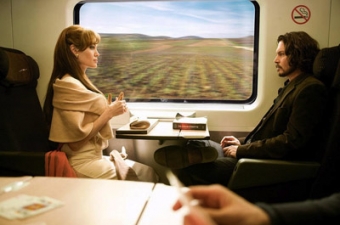 Angelina Jolie and Johnny Depp in "The Tourist"

Saying what we're all thinking, Johnny Depp turns to Angelina Jolie and sighs, "You are the least down-to-Earth person I have ever met." It's one of the precious few notable moments in "The Tourist," a talent-squandering "comic" "adventure" positioned as a shopping-break movie for the holidays.

Depp and Jolie essentially play themselves in this hapless attempt at a romantic romp: the former a goof itching to take on new roles, and the latter an unearthly creature who makes every sidewalk her runway. Jolie puts her inaccessibility to work for the part of Elise Clifton-Ward, a person of interest to police tracking her elusive boyfriend, Alexander Pearce. Pearce owes $744 million in back taxes to the British government, but that's nothing; he also stole $2.3 billion from gangster Reginald Shaw (Steven Berkoff).

As part of his plan to keep breathing, Pearce sends missives to Elise, directing her how to throw Scotland Yard and Shaw's Russian thugs off his trail. His latest scheme forces Elise to pick out a suitably built stranger and convince her observers that the stranger is Pearce. Strutting and pouting her way from train car to train car (another runway), Elise lights on Frank Tupelo (Depp) and immediately begins schooling him in flirtation: "You read spy novels. I'm a mysterious woman on a train. You tell me what my story is." (Call it a confession that "The Tourist" is the worst of paperback travel reads.)

The train is bound for Venice, so Elise sweeps Frank off his feet and into the poshest of suites at the famed Hotel Danieli. Before you can say "mistaken identity," a barefoot, pajama-clad Frank is scampering across the old tile roofs of Venice, Russian gangsters in hot pursuit. Director Florian Henckel von Donnersmarck ("The Lives of Others") shows no particular knack for staging action and even less for stoking laughs, which makes this chemistry-free romantic action comedy -- if not a chore -- dispiritingly, dully familiar.

Since "The Tourist" is a remake of the 2005 French film "Anthony Zimmer," originality is perhaps not to be expected. Make no mistake: Money has been thrown, at great quantities, onto the screen, in no small part to gather an international cast that includes Rufus Sewell, Raoul Bova, Paul Bettany and Timothy Dalton, and to purchase a flop-sweatily sprightly score by James Newton Howard.

But there's a reason the production was troubled from the get-go: anxiety about a senseless, very nearly witless script (credited to Henckel von Donnersmarck and, bafflingly, two Oscar winners: Christopher McQuarrie and Julian Fellowes) that will have even the most casual viewer scoffing, particularly at plot twists that would be wholly obvious were they not so absurd. As shot by Oscar-winner John Seale, Venice is pretty all right, but like its namesake (or, for that matter, like a kidney stone), "The Tourist" is just passing through.

Another review by a jaded reviewer. The truth is that you can't take your eyes off of the screen. The actors do their jobs (although Roger Ebert complained that Johnny Depp was no Cary Grant the latter of course only 20% of movie goers remember) and the script stays smart in a way that befits the movie. Will you remember this movie in ten years? No? Will you forget your troubles for two hours? Totally. Go see it and have a little fun with it.

The first few seconds after awakening; before I remember the virus
By Chandrama Anderson | 0 comments | 3,280 views

Think about helping others in our coronavirus-affected area
By Diana Diamond | 6 comments | 2,490 views