Agency to study ways it can modernize its train system, accommodate high-speed trains 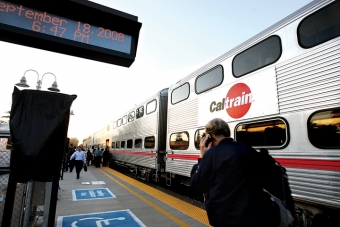 While there would seem to be positive aspects of the Simitian/Eshoo/Gordon proposal, as usual one should look at more that just the headlines.

"I'd rather see something where we invest $1 billion to upgrade Caltrain and blend it with what may come up from Central Valley," Eshoo said.

Well $1 billion is hardly even a start. $1 billion will make a dent in electrification for CalTrain, but electrification is only a small part of what is needed to "upgrade" the CalTrain corridor to make it usable to also carry HSR trainsets.

Grade separations will have to be implemented and there are plenty of them to do. CalTrain, a couple of years ago estimated that electrification and grade separating their 2 tracks from SF to San Jose was $5 - 7 billion.

So talking about $1 billion expenditures, is hardly reality.

Hiving the High speed train running on the caltrain right of way would make perfect sence and cheaper way to go because this will enable to electrified the caltrain and caltrain should elliminate the baby bullet service and have the California high speed train run the service, and Caltrain do regular stops its lot cheaper than elevating the tracks to make 4 lanes of tracks and to make underground tunnels, and after completing the first phase and other project then on the long run, we can talk about deep tunnels for the high speed rail allong the penisula.

Wasn't the use of a reasonably upgraded Caltrain corridor always the logical plan for HSR in the peninsula? It doesn't take a genius to realize that building a brand new 4-track subway from San Jose clear up to San Francisco isn't a very cost effective idea. Everyone benefits when Caltrain gets electrified---and everyone benefits when the grade separations get built. We also benefit from the completions of the full four tracks along the dense Caltrain corridor. Beyond those key upgrades which should be completed as quickly as possible, the High Speed Rail authority and Caltrain should resist pressure to "gold plate" the route upgrade.


Report Objectionable Content
Email Town Square Moderator
Like this comment
Posted by caltrain supporter
a resident of Menlo Park: Central Menlo Park
on Apr 22, 2011 at 11:54 am

Of course we know that a subway from San Jose to San Francisco may not be cost effective, but undergrounding is what is done in residential areas throughout the world, and that is what is required here if wider tracks are needed.
The total cost is not just the construction cost but also the cost of acquiring and displacing hundreds or thousands of residential and commercial properties and ruining their communities.
Improving Caltrain makes a lot of sense. But HSR makes no sense between SJ and SF, at least not along the Caltrain corridor. While 4 tracks makes sense in some places, to allow faster trains to pass slower ones, it makes no sense to put them along the whole corridor because that would have a negative impact and high cost similar to HSR.

what if HSR were to run to the largest city in the Bay Area (San Jose) and no further?

local transit, including a more polished Cal Train and Bart might be the regional distribution.

alternatively, what if the path from SJ to SF was via a different right of way: Oakland Amtrak and 280 are two that spring to mind.

For whatever reason, the HSR folks won't consider any other route than through our communities.
Before moving forward at all, HSR needs to make a credible business case with realistic ridership projections, total construction and operating costs, and funding sources. This is minimum information all our elected officials must demand before it proceeds at all. The public approval was based on faulty information and should not be considered valid public support anymore. What was clear, though, was that the public does not expect or support any additional funding to come from Californians.

Support for regional transit is critical, and Caltrain's problems are just an example of what is missing just to keep things going. What really is needed is more support to enhance the service and much needed linkages between the different transit modes. I wish they were under one umbrella so turf fighting goes away.

Anne Le Ziblatt, formerly of Tamarine and Bong Su, is back with a Vietnamese noodle bar in Redwood City
By Elena Kadvany | 7 comments | 3,561 views

You Can Help: Scents and Migraines
By Chandrama Anderson | 0 comments | 839 views