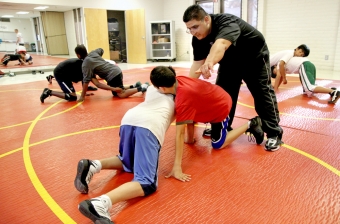 Coach Nathan Pantoja instructs Anthony Sanchez (in the red shirt), who is wrestling with his brother, Alex Ruiz. ==I Photo by Michelle Le/The Almanac==

Nathan Pantoja has done a wonderful job with Beechwood students both in the classroom and on the wrestling mat. It should be noted that he gives all this extra time as a volunteer - it was his idea. Nathan truly cares about his students as do all the teachers and staff at Beechwood School. At this school no one says "That's not my job." but rather, "What do the kids need?"

Like this comment
Posted by Heather Brinkerhoff
a resident of Menlo Park: Downtown
on Jun 22, 2011 at 1:24 pm

This is really special! Nathan models what it means to be a member of a community. He has created a space for these young people to shine. Best of luck to you, Nathan, and LONG LIVE Beechwood Wrestling!

Nathan aka Buddy saved my life when I was teenager, I was involved in gangs living in fresno. Nathan is one of kind also showing and giving what life is meant to be. It's good to see him doing good for the community. Without Nathan in my life I know I would of ended up dead or in prison, but he stayed true me and his roots good job Nathan.

Just want to say i am super proud of u lil bro. It takes alot of courage to build any thing thats never been done b4. Much love and respect.let me no your schedule and i will go and help u for a day and even watch a dual match. keep up the good work..dueces.....

We hope to see you @ the 8th Annual California Girls Middle School State Championships next spring.