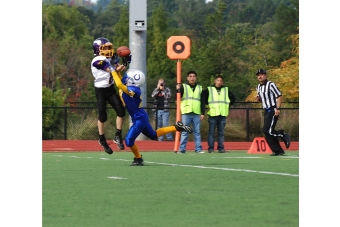 Champions of the Pacific Northwest.

Flying to Orlando to compete with other regions for a national championship.

What a great game! The Colts all seemed a foot taller and had a good first drive to score before Menlo Atherton Pop Warner got it together.

Report Objectionable Content
Email Town Square Moderator
Like this comment
Posted by Central P
a resident of Menlo Park: Central Menlo Park
on Nov 29, 2011 at 8:22 am

What an awesome game! MA had a successful interception, onside kick, 2-point conversion, 3 touchdown passes,and PHENOMENAL defense! Congrats to the boys AND their wonderful coaches: Dom, Steve, Greg, and Dave!

Portland's Thai food darling Pok Pok will be popping up on the Peninsula this spring
By Elena Kadvany | 2 comments | 3,529 views

Flying: How to lower your impact
By Sherry Listgarten | 18 comments | 2,926 views