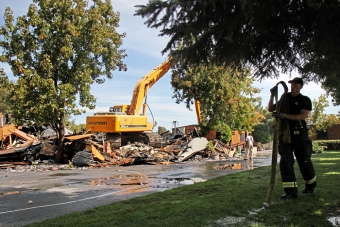 "All of our focus was on child safety. We didn't think about a fire starting at night," said Beechwood Principal Dave Laurance as he gazed at students playing on campus six days after a fire destroyed a third-grade classroom and the administration department, both housed in one of five portable buildings.

Menlo Park Fire Protection District investigators concluded that a pinched electrical stove cord in the kitchen sparked the blaze. Based on heavy charring, they said it appeared the fire burned for some time before a neighbor saw smoke around 4 a.m. on Sept. 13.

The school, a private nonprofit K-8 facility at 50 Terminal Ave. in Menlo Park, sits nestled between houses and the city's Onetta Harris Community Center, making some uneasy at the thought of what could have happened if the fire escaped campus.

The school had focused on daytime fires. The portable classrooms have two exits, although some have windows covered with a wire mesh that cannot be opened from the inside. The facilities do meet the requirements for fire safety established by state code, and two years of stellar inspection reports agreed.

Mr. Laurance said that the kids know how to react when the fire alarm goes off; the school runs regular drills, the last in August.

Even with practice, however, will young children in a smoke-filled classroom respond the same way as during a drill?

Day or night, minutes count in emergency response, and getting there sooner rather than later because of a monitored alarm that directly signals dispatch can save both lives and property, according to the fire district.

Schools tend to prioritize pouring resources into the classroom -- better books, better computers, better facilities -- after ensuring they meet safety code requirements. Given the $400,000 worth of damage now facing Beechwood School, however, the question arises of what that investment is worth when it burns down.

"That fire was burning for hours," Fire Chief Harold Schapelhouman said, before anyone noticed and called it in. With a monitored alarm "We could have gotten there in minutes."

Yet state law doesn't require monitored fire alarms or sprinklers in portable classrooms like the ones that Beechwood has used since 1986, despite long-standing efforts by both the fire district and former State Assemblyman Ted Lempert.

"This was the second portable school building fire in the last year that we've had in Menlo Park," Chief Schapelhouman said. "These structures were meant to be temporary, but often get left in place for decades and are allotted exemptions under the fire code since they are not considered permanent buildings."

Beechwood does have a monitored burglar alarm, however. Asked if that was installed after a break-in last year, Mr. Laurance said, "We've always had a burglar alarm."

Adding a fire alarm to that may be a minimal cost. "You don't have something like this happen and not reconsider. If we think it's feasible, we're going to look at how we can budget it."

The fire district's efforts may leave some schools asking, "When is enough enough?"

A public records request by the Almanac pointed to a clash between Menlo-Atherton High School, which recently unveiled the latest phase of its piecemeal multi-million dollar renovation, and the fire district.

According to the district, should a blaze break out in Pride Hall, firefighters would have to haul hoses 500 feet to connect to a water supply. A pipe system dating back to the 1950s collapsed during a test this summer, leaving trucks without a close water supply. The system remains non-functional -- a situation which the fire district feels leaves the school out of compliance with the law.

The school, however, does have a state-of-the-art monitored fire detection system, along with a recently installed fire hydrant near Pride Hall, according to Principal Matt Zito.

"Our system is 100 percent working, it covers 100 percent of campus, and we still have a full system of fire hydrants on campus plus a new high-pressure water system that can pump more water than anyone could ever use," he said.

Despite the debate over whether that wing of the school meets safety requirements, Mr. Zito said Menlo-Atherton will be installing an improved pipe system during the next several months.

"I look at it as an added layer of protection. Truly, we don't feel that we're out of compliance, but it gives us an extra layer."

Adding that layer will cost the school $150,000 to $200,000, on top of what Mr. Zito estimated to be $1 million already spent on the monitored detection and sprinkler system. "What happened at Beechwood School --that's very unlikely here. Not to say there couldn't be a fire on campus, but 90 seconds later we would have fire trucks pulling in."

Schools without the financial resources of Menlo-Atherton would have trouble affording those state-of-the-art systems even if they do decide to make installation a priority.

That's where Virginia Chang Kiraly hopes the new "Ring the Bell Fund" will make a difference. She raised the issue of non-monitored alarms while successfully campaigning for the fire district board of directors last year.

"(Beechwood) was the second school fire in the Belle Haven neighborhood in 13 months, the last being at Belle Haven Elementary School last August," Ms. Kiraly said. Now she and her husband Ken are establishing a nonprofit "to help raise funds and awareness of the importance of having monitored fire alarm infrastructure in place to ensure the safety of our children, schools, and neighborhoods, especially in low-income neighborhoods. "

Although the fund is independent of the fire district, Ms. Kiraly said an informational booth will be at the annual pancake breakfast sponsored by the Junior League and the district on Saturday, Oct 6.

"If there's one thing I know, it's that schools burn," Chief Schapelhouman said as he gazed at a list of nearly 20 local school fires. "And if it's predictable, it's preventable."

Fire Marshal Aus looked rueful as he agreed. He saw his own high school burn.

Like this comment
Posted by Let's Enforce The Fire Code
a resident of Menlo Park: Downtown
on Oct 2, 2012 at 9:00 pm

It is so nice that Ms. Kiraly and her husband is going to set up a non-profit for this project. Let's also have the Fire District enforce Menlo Park's and the state of California Fire code, specifically written for schools. Warnings and cutting corners don't stop fires and don't save lives. Don't built it, unless you can afford it. As the chief said, how many of these schools have temporary structures that should not be used as school classrooms.

I've researched this issue. I've been able to find a double fire fatality at a public k-12 school in a single incident, during school hours, in the USA, in the 1950's. None since then. Does anyone have other information? Student safety is an important issue. When examining the entire issue, fire risk seems to well under control. Bigger threats seem to be hurricanes, tornados, flooding, acts of terror, fire arms.
Comment?

Like this comment
Posted by Virginia Chang Kiraly
a resident of Menlo Park: University Heights
on Oct 11, 2012 at 11:18 am

Tony: While I appreciate your comment, what will it take to ensure that our students and, equally important, school property and neighborhoods are safe? 92 children and 3 teachers dead, which is what happened in a 1958 Chicago school fire?

I recommend that you read the book "To Sleep With Angels," which is the story about the above fire I mention and to which you probably refer. The Chicago ordinance language at that time is incredibly similar- eerily similar- to the California legislation today, which resulted from a 1997 fire in my fire district community ("Green Oaks Family Academy Act"). The CA legislation was so watered down that it didn't even help the school, Green Oaks Academy- a public school, that it intended to help!

Thankfully, in CA, schools built after 2008 are required to have monitored alarm systems that would notify a first responder. However, there are many schools in CA built before 2008 that are vulnerable. Unfortunately, two of them here in my community and within the Menlo Park Fire Protection District, caught fire (in a 13-month timeframe) and suffered damage to school property, not to mention the mental anguish and displacement of students, who could not attend school (Beechwood School) for days. Both times, the only way that firefighters knew about the fire was that a watchful neighbor called in the fire for a response. Thankfully, no one was hurt in either fire.

I'd rather go with notification and response than destruction and despair!

Singapore's oldest cafe was about to open in Palo Alto. Then, the coronavirus hit.
By Elena Kadvany | 2 comments | 5,030 views

A Pragmatic Approach to A Trillion Trees
By Sherry Listgarten | 4 comments | 4,151 views

Repairing a Disagreement with your Beloved & “Physical” vs. “Social” Distancing
By Chandrama Anderson | 2 comments | 2,830 views

The University of California’s flexible policies during COVID-19
By John Raftrey and Lori McCormick | 6 comments | 2,716 views