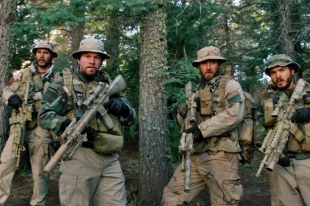 In the age of the superhero, the movies' most reliable real-life hero has been the Navy SEAL. "Lone Survivor," is the latest in a string of films, including "Zero Dark Thirty" and "Act of Valor" to honor the Navy's special operations force with as much faithfulness as the filmmakers could muster. (AP Photo/Universal Pictures)

One word you won't see used to describe "Lone Survivor," the fact-based movie about a FUBAR Navy SEALs operation: "contemplative."

Above all an action movie, "Lone Survivor" bucks the trend of recent thought-provoking tales of survival like "All is Lost," "Gravity" and "12 Years a Slave." The firepower-filled film based on Marcus Luttrell's nonfiction book (co-written with Patrick Robinson) takes for granted the simple psychological drive of survival and doesn't pause to consider philosophical implications. The main impression "Lone Survivor" leaves is of bodies taking incredible punishment and clinging to life while under constant attack.

But their wooded cover isn't as secure as they believed, and the mission quickly devolves. Once surrounded by dozens of Taliban, the mission becomes one of hopeful radio contact (compromised by the rocky terrain) and pure endurance. Bad proceeds to worse and worst before the spoiler-y title comes to pass. Echoing "Chinatown," Luttrell puts it, "It's just Afghanistan, that's all."

One might read into that comment and the failed operation a whiff of doubt about the War in Afghanistan, but tonally this "band of bros" story celebrates the toughness and fraternal bond of the American military man. Director Peter Berg ("Friday Night Lights," "Battleship") opens with a montage, demonstrating the elite status of the Navy SEAL, that could easily double as a recruitment film; subsequent jocular banter attempts to endear us to the men about to be in harm's way.

The film's final act balances the monstrous Taliban with the Pashtun villagers who provide aid and comfort to Luttrell out of their ancient code of honor and current hatred of the Taliban; the enemy of their enemy is their friend. So "Lone Survivor," despite depicting traumatic war horrors, isn't an anti-war film. What it is, unambiguously, is pro-troops. And with reasonable accuracy and visceral expressiveness, it depicts true events.

Still, the unwillingness to "engage" in larger questions disconcertingly reduces a real-life tragedy to an action movie. When violence helps to tell a story of thematic import, that's one thing, and when action serves as an element in an adventure fiction, that's another, but "Lone Survivor" is something else entirely, something that some will find deeply stirring and others will consider off-putting, if not distasteful.

This comment isn't about Lone Survivor. I just can't see how, in your comparison, you would describe Gravity as thought provoking. It was enjoyable, but it was nothing more than a suspenseful special effects driven movie. We all wanted to see Sandra Bulluck's character not die, and that's about as far as it went.

This movie is the best movie I've seen in a long time! Coming from a military family and my husband being a Marine, this movie brought me to tears many times. Mark Wahlberg and the actual survivor who helped direct the film done an amazing job, I can't imagine how painful it had to be for him to relive this event and the loss of his brothers. Using the word "distasteful" to describe this film would be disrespecting what our troops fight for! My heart aches for Marcus Luttrell, the men who died, their families, the villagers who actually fight to help our troops, and the men still fighting for our freedoms! God bless them all!

The only "distasteful" thing, is our current politicians, who having never served in the military, continue to send our armed forces on dubious missions involving wars that cannot be won politically. "No more Vietnams", really? It would be so wonderful to see wounded veterans elected to office, not mealy mouthed lawyers. USMC Veteran.

I thought that the movie was very good. I also read the book Lone The movie follows the book "Lone Survivor" very closely and does a great job of accurately portraying what happened to the group of SEALs on that mission. The movie is not political; it is really about duty,honor and courage. It is about doing the right thing even if it costs the lives of 3 men and the Rapid Reaction Team that came to rescue them. I found it interesting that there was no mention of the fact that Lt. Mike Murphy won the Medal of Honor (awarded posthumously) and Marcus Luttrel was awarded the Navy Cross for their courage. It is about never being out of the fight until you are dead. It really makes you proud of our soldiers and their sacrifice. It should humble anyone who sees the movie, because you have to wonder, how far would you be willing to go?

What is distasteful is this limp-wristed review. Not even sure a non combatant should be allowed to speak these men's names aloud, much less criticize their actions or motivations. These men are the best of the best, the best in the world. I only hope the movie is as good as the book, and does honor to these men, and by that I mean all the men involved, and there were hundreds of them. Navy, Army and Air Force. The complete story of what transpired to get the men back home, alive or dead, is so amazing as to almost just be a movie plot. But it was real.

I liked the movie, I loved the book. My only criticism of the movie is how different it was from the book. I thought it would follow the book more closely, but it was far different. If you want to know what really happened read the book.

Lone survivor is an excellent movie, if you have not read the book. We all realize that the book does the story more justice, and that Hollywood is always going to make changes to the story in order to make a few bucks. My concern lies with how much change there really was between the book and the movie.
I’ll start with what was cut out from the real story that the movie failed to mention. For starters, one of the most important events of the book comes with Marcus’ family, who back at home on the ranch in Texas is awaiting Marcus’ return along with hundreds of others, family, friends, people who did not even personally know Marcus but show up just to show support for his mother and to pray for his safe return. This ranch full of supporters is mentioned frequently throughout the beginning, middle, and end of the book. I understand that the story contains more than what could be fit in a 2 hour film, however I do not understand why the movie would remove some of the most emotional parts of the story.
Next is the change of events. In the movie there are multiple events that are either changed or completely different from the book, which I assume is the more accurate of the two since it is a personal account. The majority of the movie, about 2/3 of it, is very accurate, although it only shows the SEALS training for about 2 minutes when it was more than a third of the book. However, when it comes to the village scene, the story loses credibility quickly. Pastunwalli is a code of honor followed by the Pastun people who have been around longer than Islam has itself. It is important when you watch this movie to understand Pastunwalli and what it stands for. Those who follow this unique code will provide hospitality to anyone who needs it, whether their nation recognizes the individual as an enemy or not. So when Marcus makes his way to the fresh water and is confronted by who he believed to be the enemy, It is only a villager who wants to help him whether he personally likes Marcus or what he stands for, strictly because of Pastunwalli code. When Marcus is under the care of the Pastun people, he is truly confronted by who is the supposed Taliban, and though they beat him and he is unable to defend himself, his head is never almost cut off like the movie presents. For times sake I will make a list of things changed between the two
In the Book
• Marcus gains a relationship with several of the village’s kids.
• Marcus is poisoned by the water he drinks, because it is from some old non-purified can.
• Marcus is beaten and cannot fight off his attackers because he is too weak.

In the Movie
• Marcus gains a relationship only with the child of his host.
• Marcus drinks water from a flawless looking bottle of water.
• Marcus is beaten but stabs one of his attackers with a knife given to him by the hosts child.

This is not even close to all of the differences between the book and the movie, however it was still a fantastic movie, but if you would like the real un-corrupt story, read the book.

These local restaurants are donating meals to Bay Area residents in need. Here's how to help.
By Elena Kadvany | 6 comments | 10,841 views

Coronavirus: Plan ahead now for a big outbreak
By Diana Diamond | 18 comments | 3,912 views

Will the Coronavirus Save Lives?
By Sherry Listgarten | 29 comments | 3,737 views

The first few seconds after awakening; before I remember the virus
By Chandrama Anderson | 0 comments | 803 views