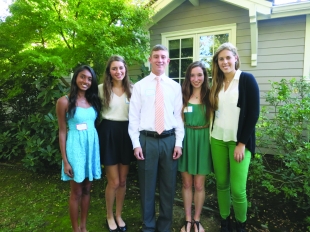 Student-athletes Leah Hess at Pinewood School and Adam Greenlow of Menlo Park at St. Francis High School are the winners of the 2013 Chris Zider Scholarship awards.

Each receives a $15,000 scholarship that can be used for college, private high school tuition, or for education-related expenses, such as taking a summer course on a college campus.

Since 1993, when the Chris Zider scholarship program was established, two scholarships have been awarded each year, one for a boy and one for a girl, in memory of Chris. He grew up in Menlo Park and Portola Valley and was the oldest child of Bob and Cheryl Zider of Portola Valley.

Chris died in a snowboarding accident at Lake Tahoe in 1992, when he was 15 and a sophomore at Woodside High School. He attended Menlo School his freshman year after graduating from the Portola Valley School District.

The scholarship was established to honor the memory of Chris by recognizing the character and accomplishments of high school sophomores in the classroom, on the athletic fields, and in their families and communities.

Over the past 21 years, there have been 166 scholarship finalists and winners and 1,500 applicants from 15 local high schools. The final Zider Scholarships were awarded in 2013.

"We believe the scholarship has accomplished its purpose and far surpassed our expectations in a profound way," said Mr. Zider.

"In my eyes, all these young adults are winners," said Ms. Zider. "Besides their many accomplishments in the classroom, on the playing fields, and in the community, their love for their family comes across."

Adam Greenlow from Bellarmine College Prep played football and ran track both his freshman and sophomore years. He has volunteered at Via West, an organization dedicated to helping those with disabilities and special needs.

Leah Hess played tennis and soccer at Pinewood School both her freshman and sophomore years and received the coaches' award in tennis. She spent three weeks in France during the summer and lived with a French family. Her family also hosted a French exchange student. She is a Girl Scout, sings in a choir, and volunteers at Lytton Gardens senior center in Palo Alto.

Megan Colford, a member of Friends of the Poor (Bay Area Chapter), took a 10-day trip to Guatemala this past summer. She studies French and Spanish at Castilleja School, serves on the student government, and also has played lacrosse and tennis at her school. During her spare time, she enjoys yoga.

Jake Dow played basketball at Crystal Springs Uplands as a freshman and sophomore and also played football his freshman year. He works at the Riekes Center, a youth development center in Menlo Park.

Steven Larreynaga played basketball and football his freshman and sophomore years at Woodside High. He was accepted at Middle College and is able to attend classes there while still in high school.

Nicolas Plume ran cross-country and track both his freshman and sophomore year at Menlo-Atherton High School. He received the most improved player award on his cross-country team. Since 2009, he has been running a soap business, which, he said, has been quite profitable.

Julia Weingart played soccer and lacrosse both her freshman and sophomore years at Menlo School and also plays club soccer. She is a member of the National Charity League and participates in the Amigos leadership program. She spent seven weeks in Nicaragua last summer.

These local restaurants are donating meals to Bay Area residents in need. Here's how to help.
By Elena Kadvany | 6 comments | 10,825 views

Coronavirus: Plan ahead now for a big outbreak
By Diana Diamond | 18 comments | 3,905 views