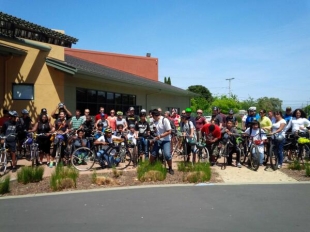 Riders at the finish line of the Unity Bike Ride on May 24. (Photo courtesy of Menlo Park Police Chief Bob Jonsen)

This looks like it was a success. One comment - I can't tell from the picture, but I hope all of the riders had helmets (it is the law for riders under 18, and highly encouraged for ALL riders).

Just to clarify, all riders wore helmets which were either donated by Facebook or by our friends at Bern.

And the fantastic designs were rendered by Studio SK (studiosk.net). The principals are Sean and Maxine Kennedy and they have been supporting us pro bono.

Thanks for inviting Local Motion's Bay Area BikeMobile to the event. Our team had a great time providing free tune ups and teaching participants about bike maintenance at the Unity Bike Ride. To sign up for a free Bike Mobile repair clinic for youth at your community center or event, please go to www.bayareabikemobile.org. We are looking for summer events to attend. This program is brought to you by Spare the Air Youth. Thanks!

Portland's Thai food darling Pok Pok will be popping up on the Peninsula this spring
By Elena Kadvany | 2 comments | 3,541 views

Flying: How to lower your impact
By Sherry Listgarten | 18 comments | 2,928 views