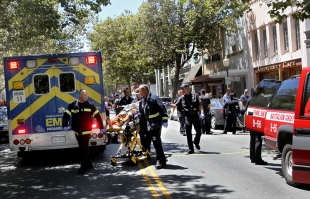 Emergency responders from the Menlo Park Fire Department carry an injured man to an ambulance following a car accident in which a driver drove over a sidewalk near University Cafe injuring six people, one critically, on July 31, 2014. Photo by Veronica Weber.

One person was critically injured and five others suffered minor injuries during the Thursday lunch hour when a silver Nissan crashed into University Cafe in downtown Palo Alto.

According to police Agent Marianna Villaescusa, a car driven by a man in his 90s hit several people on the sidewalk and sitting at a table outside the restaurant at 271 University Ave. at around 12:36 p.m. The driver was trying to parallel park, his Nissan Versa moving at about 5 miles per hour, when he accidentally hit the accelerator instead of the brake, Villaescusa said.

The car jumped the curb, hitting a car (a 2014 Acura four-door sedan) parked on University in front of the restaurant and crashing into the eastern side of the building, police said. The car was later moved back on the sidewalk toward University.

The driver was one of six people injured in the crash and was being interviewed by officers Thursday afternoon. Police said there is no indication at this point that either drugs or alcohol played a part in the accident. The driver has not been arrested or cited at this time, police said.

A section of University Avenue, between Ramona and Bryant streets, was closed off to traffic Thursday afternoon while medical responders arrived at the crash scene and officers investigated. As far as the police know, the driver did not have a medical incident immediately before the crash, according to Villaescusa.

Five of the victims were taken to Stanford Hospital for treatment.

One eyewitness, James Fowler, told the Weekly that he was standing outside the restaurant with his wife, about to go inside when he saw the car accelerate out of the corner of his eye.

"The car was stopped behind another car and then I just saw out of the corner of my eye, it accelerated up onto the curb," Fowler said.

He pulled his wife out of the way just as she felt the car brush against her dress. They then saw the car run into an outdoor table, hitting one man, he said. He said another person who was standing was also hit and was "carried by the car."

Police said the section of University Avenue will be closed while the scene is being investigated.

The family of victims of a similar car accident in downtown Menlo Park last October eventually filed a lawsuit against the driver. Three brothers – one 9 year old and twin 6 year olds – were walking down Santa Cruz Avenue when a 90-year-old Woodside resident jumped a curb and pinned the twins against a wall, leaving one with a broken arm and the other in serious condition.

The man's drivers license was confiscated at the time and he was ordered to schedule an examination within five business days with the DMV, or risk suspension of his license. The boys' family filed a lawsuit against him in November, seeking punitive as well as general damages on behalf of all three boys for their injuries.

Menlo Park police said that because the driver held a valid license and wasn't under the influence of alcohol or other drugs at the time of the accident, he faced only an infraction for driving on the sidewalk.

California doesn't have separate licensing standards for senior drivers, according to the Department of Motor Vehicles, but instead looks at every driver's mental and physical ability to comply with traffic laws.

today's accident on University Av where an elderly driver drove into several people outside the University Cafe Palo Alto reminds us all to evaluate if we are capable of driving responsibly. Many seniors and their families feel elderly people should maintain their independence and continue driving - this may put others in danger and is a totally selfish decision. Any age driver can have an accident but elderly are at a high risk and at some point need to STOP DRIVING so there's may be safe. Driving is a priviledge - don't abuse it.

These local restaurants are donating meals to Bay Area residents in need. Here's how to help.
By Elena Kadvany | 6 comments | 10,844 views

Coronavirus: Plan ahead now for a big outbreak
By Diana Diamond | 18 comments | 3,916 views

Will the Coronavirus Save Lives?
By Sherry Listgarten | 29 comments | 3,739 views